First part of this blog can be found here:

This second part is describing concept of roles and how to use SQL interface to define security objects.

Roles should be designed using role hierarchy ability of HANA database. First you should create elementary roles for each schema/package. These can be then directly assigned to users or can be orchestrated together to form higher level roles based on type of the user.

As result we will need to crate these roles:

Only owner (data owner user) should grant SQL privileges. Granting privileges via other user (that has proper grant privilege) is not recommended because all granted privileges are being automatically revoked at the moment when this user is deleted or when his authorizations were removed.

Every data owner must grant select privilege with grant option for his schema to technical user _SYS_REPO. Without this step queries to all dependent views will end up with following error: “invalidated view: package/VIEW”. See SAP Note 1612696 – “Invalidated view” error when using analytical views for more information.

Of course it is possible to grant access on object level (tables, indexes and views) instead of schema level but this should be done in exceptional cases only. Object level security would cause increased implementation and maintenance effort and low transparency of security concept.

These roles will be required for selecting corresponding subsets of data from HR package.

We will also create role for ANALYTIC_TESTING_ALL privilege:

Having analytic privilege is not enough to read the data. Role also must contain SELECT privilege for corresponding automatically generated objects in schema _SYS_BIC.

To separate developers based on projects and activities we will create following roles for each defined package:

This will result in following roles:

System privileges are predefined internal authorizations that should not be assigned to regular and application users.

These privileges are intended to create different types of administrative users.

Biggest issue in HANA is that only grantor can revoke the privilege. Problem will arise in case that company will have employee working in HANA security who will grant a lot of roles and then he will leave. In such case his work has to be redone. Same issue happens when such user is on vacation and some role needs to be revoked. Such action is currently not possible. Conclusion of this “feature” is my recommendation to have one security user that is shared between very few individuals. Of course this is making whole security concept vulnerable.

Package roles are controlling who can see and edit objects in package. However during object activation there are internal objects created in schema _SYS_BIC. Without proper authorization against this schema you cannot activate objects.

We will create new role having all required privileges for working with packages and analytical objects.

To allow listing all defined packages you need to grant following privilege:

To enable modelers to activate objects you need to grant them create privileges:

To allow them to re-active objects they need to be able to drop objects:

To enable creation of calculation scenarios and cubes you need to grant following system privilege:

Modelers will have authorization to create new privilege but not to activate it or assign to any role (which is very good idea otherwise user can grant himself any authorization).

Based on your needs you can combine elementary roles into bigger logical units. For example we can design role for modelers to give them appropriate privileges into testing schema and package for testing.

Note: Notice that we intentionally grant only READ access into schema DATA_BODS_TESTING as objects in this schema should not be created manually but exclusively from SAP BusinessObjects Data Services.

Be extremely careful when you delete object from HANA database. I suggest never using CASCADE option because important objects might be deleted. But be careful because during some delete operations (like deleting schema) cascade is always used.

In case you will try to delete user with dependent objects you will have following error:

In such case you should check view “SYS”.”OWNERSHIP” to list objects owned by this user.

Same way other objects can be dependent on these objects. To identify them execute select statement against view “SYS”.”OBJECT_DEPENDENCIES”.

Unfortunately there is nothing you can do – I am not aware about possibility to transfer ownership.

For creating just few users and roles you might use HANA studio. But in case you will need to create more users it is more convenient to use SQL interface.

Below you can see example how to create part of our configuration. 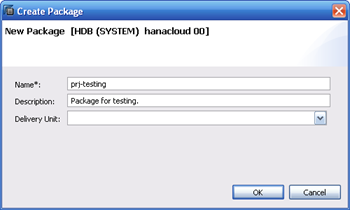 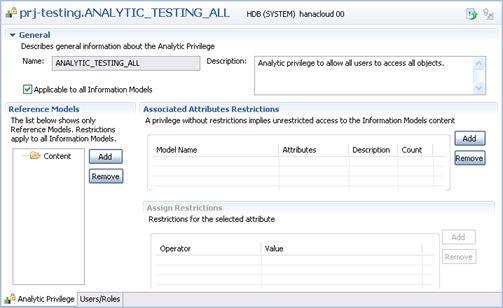 Check option “Applicable to all Information Models” (be sure to fully understand impact of this adjustment) and click Save. Activate object.

Note: I would recommend using user SYSTEM (or specifically created user) to create and grant all security related objects (except SQL privileges where owner should grant them). Reason for this rule is fact that privileges are removed if user who granted them is deleted or if corresponding privilege is removed for this user.

GRANT SELECT ON SCHEMA DATA_BODS_TESTING TO _SYS_REPO WITH GRANT OPTION

GRANT SELECT ON SCHEMA DATA_MAN_TESTING TO _SYS_REPO WITH GRANT OPTION

If required then after creation of objects in package you can define custom-tailored analytic privileges.

It should be possible to add privileges to role using following SQL syntax but it seems that SQL interpreter is having issue executing the command.

* 292: wrong number of arguments: GRANT_ACTIVATED_ANALYTICAL_PRIVILEGE must have three parameters SQLSTATE: 07001 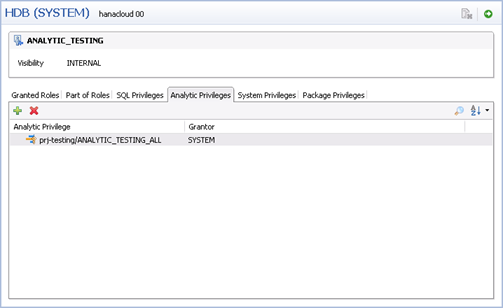 Good level of detail in security concepts. I have also implemented security in my project which went live last week . I have initially struggled a lot as there was no documentaion ( i wish u have written this blog 1 month back 🙂 . I had to learn all this in a hard way ie trail & error ) & also there is no concept of schemas having passwords ( which makes more painful). Also , when we create public synonyms they are created under system . By any chance, do u know how to recompile procedures without dropping them . In oracle, we have create or replace which takes care without  dropping & re executing the grants

"Schemas with password" can be implemented by creating dedicated users - data owners (if this is what you had in mind). These users will be owners of this schema and will be able grant privileges. Important to note is that schema owner will not automatically be owner of all objects within given schema. Unfortunately this feature can cause some unexpected behavior.

If you need to address security on object level (to grant execute privilege only for specific procedure) and if you expect that this procedure will be updated - then I would suggest following. Define new role for each stored procedure or group of stored procedures and grant it with appropriate privileges. This role can be granted to other roles or users instead of privilege itself. Advantage of this configuration is that after recreation of procedure you need to do just one grant statement against this statement.

I hope it helped.

is there a way to copy an existing user while creating new users using SQL or UI?

some time ago I wrote stored procedure doing copy of a user - however it has it's own limits - only some of roles will be copied (only those that were granted by used doing copy)...

Here is the "old" code - it will need some rework since it was designed for old revision on SP02:

You can then call copy operation using following statement:

You might also consider extending the script to cover more then just roles...

Very useful blog, many thanks.  I had a question around somehow implementing table based security.  In our project we wish to grant authorizations for 2000 users based on a table managed in the ECC system which indicates the employee number (which is also the user name) and the Org Unit for which they have access.  This then grants access all the way down the hierarchy to information for those Org Units.  We would want to do the same for controlling data access across several schemas to control all data accessed by these users.

At this point is this possible using a variation of the commands you use above and a loop at that user table from the source system?

I am not sure I understand... you wish to grant access to 2000 developers? I am not sure that all those users really need access to HANA tables. Or maybe you have 2000 users defined in BOBJ and you are reusing BOBJ credentials - is this your case?

If yes and you would like to keep it this way then I would probably create role for every org.unit with proper privileges (manual process because each role will have probably different set of tables/privileges) and then synchronize the users with roles based on the ECC tables you mentioned.

However bear in mind that such setup will be very restrictive and not suitable for development environment...

Alternative to your approach is to use fixed HANA users in universe definition for given BOBJ dashboard/report (or set of dashboards/reports) and then grant them only tables they need for proper processing of the dashboard/report. Security then needs to be addressed on BOBJ level - however it will never happen that you have access to BOBJ dashboard/report but not to the underlying HANA tables.

With regard to SLT, I am aware that the SLT initial connection in LTR creates the user for the specific schema and the 3 roles related to that schema. However, can you assign the privileges for the SLT schema owner to SYSTEM without having to stop the replication, change the SLT user password and use the SLT User account to assign after creating the connection? This appears to not be possible.

Tomas,  It seems that you can now delete users without the cascade option?  It seems like you have 2 options now, restricted and cascade options when deleting end users within HANA studio.  Does this mean that we won't lose all of the objects and the associated granted rights with them?  And does this mean that it is best practices to review the objects and then delete as required.  Also, not sure the impact of granting future rights to those objects or would it be a best practice to grant all rights to SYSTEM at promotion of those objects from DEV to QA or PRD?  Let me know your thoughts.

Hana is asking to provide authorization to all system geenerated column view under _SYS_BIC. There are so many dependent objects which is access via role.