News From The Board  An Updated Work Plan For The IASB

In The IASB refocused its agenda on priority projects published early this year, we highlighted the updated IASB work plan as it resulted from the IASB – FASB joint meeting of November 2010. At that time, achieving the eagerly awaited convergence projects by June 2011 was absolute priority, which justified postponing other topics.  The stakes were high as the U.S. SEC’s decision on IFRS acceptance depended on the completion of the convergence projects.

Where are we up to nearly three months after the June 2011 due date?

The table below presents all the priority projects listed in IASB December 2010 work plan, with their estimated publication date at that time. For each of them, the right-hand column gives the current status. 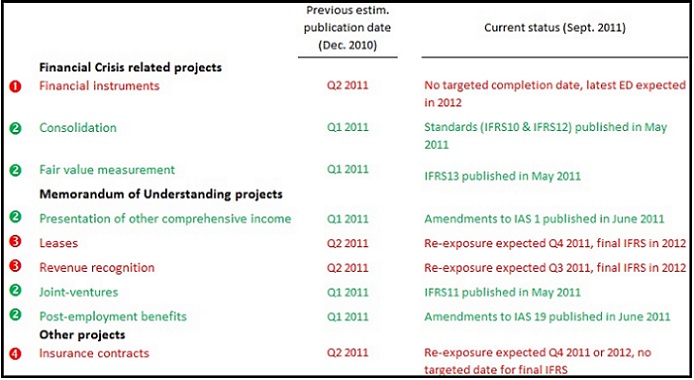 The project to replace IAS 39 is being undertaken in three phases: classification and measurement, amortized cost and impairment, and hedge accounting (further divided into general and macro hedge accounting).

The first phase has been completed by issuing IFRS 9 (first in November 2009 for aspects regarding assets and additionally in October 2010 for liabilities).

The remaining phases are still ongoing with the following due dates announced by the IASB:

Moreover in August 2011, the IASB published an exposure draft of proposals to adjust the mandatory effective date of IFRS 9 (1 January 2015 instead of 1 January 2013). The objective is to align all phases of the project to have the same effective date.

These new or revised standards will be dealt with in our next blogs, planned to be released by the end of 2011.

Much has been written on these two major projects. Even dealing with different topics, they have a lot in common:

As a consequence, the corresponding final standards will not be issued before 2012 and will probably not come into force before 2015.

The project “Insurance contracts” draws less attention as it only affects a limited number of companies (financial institutions).  However, as the previous projects mentioned above, it faces difficulties and has been much delayed. It should be reminded that this project, which aims at replacing the current – and always regarded as temporary – IFRS 4, started in 2004. The exposure-draft issued in July 2010 should be re-written for a publication expected in the late 2011 or early 2012.

What could be the consequences of these delays?

It is true that most interested parties – preparers, in particular – have welcomed the decision to delay final standards publishing. Many respondents to exposure-drafts had previously expressed concern over going too fast (to meet the deadline) to the detriment of quality.  However, the uncertainty that delays create raises much frustration as preparers are still unable to plan for the future accounting rules.

For their part, the IASB and the FASB tend to downplay the importance of the June 2011 deadline. FASB chair Leslie Seidman said:

“(…), so let me clarify any misunderstanding about the June 2011 date. It was always intended to be a target, not a deadline, and we always said that achieving the target was subject to the nature and extent of the feedback that we got on each of the exposure documents. (…) The quality of the standards remains of the utmost importance.”

Now the question remains whether these delays may impact the timing of the SEC’s decision (and maybe other jurisdictions’ one) regarding IFRS acceptance.

Stay tune – our next blog will focus on IASB’s completed projects.

i think the latest most preferable terminology coming out of the SEC are condorsement and incorporation, FASB won't do anything until SEC issues an administrative rule.

this document captures the administrators' state of mind as of the past July:
http://www.sec.gov/spotlight/ifrsroadmap/ifrsroundtable070711-transcript.pdf