Attending SAP Forum (Worldtour Turkey) events is a ritual for me for the last six years; I’ve never missed one! This year, however, was a bit more exciting as it was my first SAP Forum with my “SAP Mentor” badge. I had the reponsibility to spread the event’s wealth of content to as much people as possible. In parallel with this purpose, I tweeted and e-mailed heavily prior to the event. And during the event, I tweeted about my impressions and session contents till my fingertips exhausted. And finally with this blog, I’d like to provide a summary of my impressions on the event.

The slogan of the event was “The Best Move” – reminding of the chess game. This had a meaning of course : World-famous chess master Garry Kasparov was the honor guest and keynote speaker of the event. And maybe with the facilitating effect of Kasparov’s presence, this year’s event was the most crowded one I’ve ever seen : There was a long queue in front of the registration desk consisting of SAP Forum enthusiasts. Thanks to on-line registration, I managed to get into the event site without joining that queue. 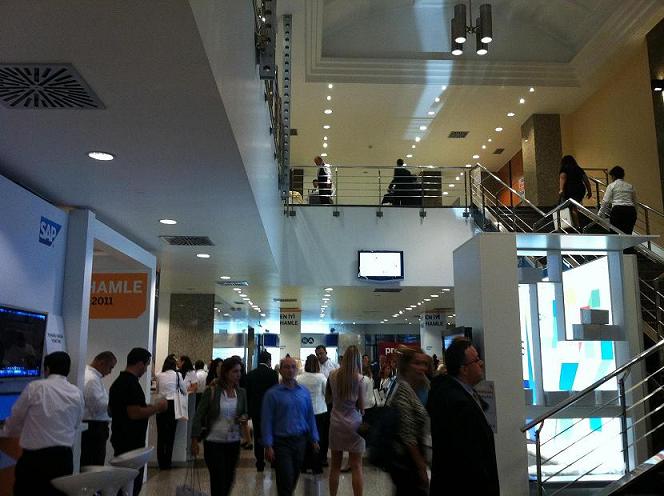 When I am in the event site, I always run across old friends; this was no different this year. After some quick-chatting, I managed to get to keynote session auditorium and luckily found a place at the front rows.

At first, Serdar Kuzuloğlu -a well-known Turkish journalist and TV programmer- came to stage and triggered a joyful atmosphere. Within this atmosphere, Cem Yeker – General Manager of SAP Turkey- was invited to the stage. Right after that point, keynote speech turned into a chat session where SAP Turkey’s activites and future targets were communicated to the audience in an informal and sincere way. Some key points mentioned by Cem Yeker were:

And came the moment .. Garry Kasparov appeared on the stage receiving loud applause from the audience. Mainly, his speech was about gamification and in-memory computing where Kasparov tried to express his feelings on in-memory computing using chess terms. He stated that although computer power was an important driver for success in this game, advanced chess levels -which resembles HANA technology- can not be achieved unless a smart human interacts and collaborates with this powerful computer. In other words, speed -provided by computers- is essestial as long as you know how to make maximum out of it using processes -provided by human beings-. Kasparov mentioned that seeing into the future refers to the “Big picture” and “Big picture” refers to HANA in SAP-terms. Garry Kasparov ended the speech with a quote from Mustafa Kemal Atatürk -founder of Turkish Republic- which led to a storm of applause in the auditorium : “A nation which does not meet the demands of science and technology deserves no place on the path towards development.” 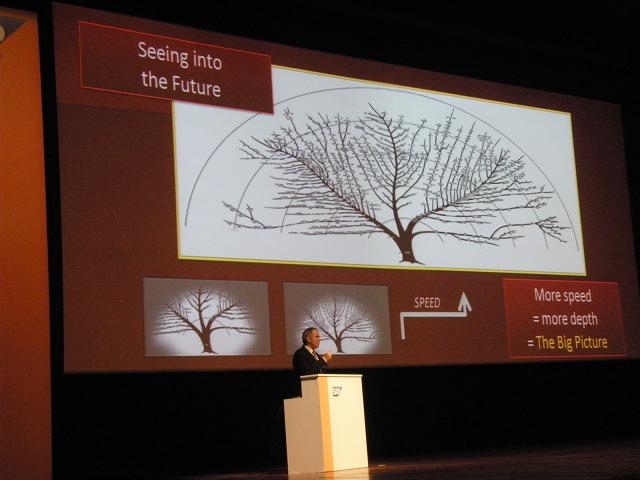 Following the keynote speech, thanks to my mentorship position, I was invited to join press conderence of Garry Kasparov -This was my first press conference presence and I was full of excitement and joy-. After a short intro provided by SAP Turkey officials, questions&answers part started. There were a lot of questions asked to Kasparov. In one of them, he was asked what, he believed, the reason was for the economic crisis in some European countries and answer was : “As Euro lacks innovation engine, problems are experienced in some European countries”. Yet in answer to another question, Kasparov explained in detail the Kasparov Chess Foundation’s activities all over the world and how chess was utilized to facilitate success in children’s education.

After a morning being exposed to many great ideas and knowledge, I ran out of fuel and made myself to the dining hall to get some. Dining hall was overcrowded as expected, but the meal was delicious.

When lunch time was over, the afternoon sessions started. There were fifteen parallel sessions focusing on subjects including mobility, technology, business intelligence, HANA, Turkish Commercial Law, banking, SCM, HCM, CRM, industry success stories. When I checked the session agenda I felt disappointed that cloning technology is not yet usable in everyday life; there were many interesting sessions but only one physical myself. So I picked up the sessions that drew my attention the most and had great time during all of the sessions. The sessions I’ve attended were:

Other than the sessions I’ve attended, there were many other interesting ones. You can refer to all session details of SAP Forum 2011 using the link below:

In this year’s event, there were also TechEd-like Demo Jam sessions where SAP solutions could be examined on mobil devices by the patricipants (Although I could not participate -due to my single physical being- I believe it has been a great experience for the ones who attended these sessions)

In brief, another SAP Forum is over with a lot of knowledge in the bag from diverse topics including in-memory computing, business inteligence and mobility. And I felt myself satisfied to see the power of community again in action with this wonderful organization. Now I am looking forward to attending SAP Forum in Ankara and getting curious and excited about SAP’s  innovations and breakthroughs to be announced in this upcoming event.

Former Member
Blog Post Author
September 27, 2011 at 8:32 am
Thanks Tammy, I'm so happy to read your positive comments 🙂

seems like Mr Kasparov knows a thing or two about gamification.

Great idea, I will work on it!

All the best,
Dilek

Thank you for this great blog, as a member of Turkish marketing team, happy to see our mentor's positive comments 🙂

Former Member
Blog Post Author
September 27, 2011 at 9:24 pm
Dear Cansu,
Actually I thank you for making this great event happen, and for all of your efforts on this blog 🙂
All the best,
Dilek

This is the first SAP Forum that I couldn't attended for 10 years. Now, I can feel the taste of the event with this blog.

Thanks for the great summary.

Former Member
Blog Post Author
September 28, 2011 at 9:14 am
Thanks Abdul; in SAP Forum I've looked around for you indeed.

Abdulbasit Gulsen
September 29, 2011 at 2:55 am
Normally it was on my calendar but I had to stay at Ankara. I couldn't adjust my schedule since I was away for a week during SAP Teched.

Wondering, what the great quote was that Kasparov ended on?

Also did anyone ask about his thoughts about Watson? How does his comments of computer power alone isn't enough square with his loss against brute force Deep Blue defeat? Probably not the nicest question to ask, but interesting nevertheless.

I mean I stopped playing chess against the computer as I was struggling playing quick games on easy mode. That was just too humiliating 😉

Thanks for your concerned response 🙂
The quote was "A nation which does not meet the demands of science and technology deserves no place on the path towards development". Now I've realized that I must definitely add this quote to the blog!

Coming to super computers, well, actually his first game against Deep Blue -which ended with GK's victory- was mentioned as the latter was a little bit controversial from Kasparov's side. However, nobody had the guts to ask about Watson 🙂 Anyway, you're right. Machine power and speed reached such incredible levels that we cannot fight with our brain power alone..

It was nice to get a feel of SAP events outside the Middle East.  I have wondered what language the proceedings are in, in countries like Turkey, and China.

I have always wanted to visit Istanbul - if the proceedings are in English, I could plan to attend one in the future and spend a couple of days in the city too.

Thank you for your interest in my blog.
Approximately 10% of all the sessions were either held in English or a simultaneous translation was in place. Unfortunately, the rest of the sessions and nearly all of the documentation were in Turkish. However, I would find many friends -including myself- to help you understand the session contents if you come to the next event in Istanbul. If we have more and more foreign attendance, session and documentation contents would turn into a bi-langual format.

Your visit to wonderful city Istanbul is strongly recommended.

A visit to Istanbul is definitely on, next year, even without an SAP event. The whole family is looking forward to it - Got us a Guide Book nearly a year ago:-)

I am attending TechEd next week in Bangalore. Looking forward to it.

You shouldn't postpone your Istanbul trip anymore, it is a great city to see 🙂
I will be in Madrid TechEd; have fun in Banglore..

During the event we also followed your tweets (impressions). Keep sharing your thoughts with us as our mentor.

SAP Forum 2011 Istanbul was wonderful like you mentioned.Thanks to everyone that contributed.

Former Member
Blog Post Author
October 5, 2011 at 4:03 am
Thanks Huseyin for your encouragement!
Hope to see in upcoming Inside Track Istanbul on December 3rd.