Did you suffer from:

– WAY too many emails in your inbox?
– A longing for rapid fire tweeting and social media interation?
– ‘Jones-ing’ for networking lounges or speaker pods?
Then you probably suffered from PSTW, Las Vegas strain.  My prescription?  The following InnoJam recap blog.  It even has pictures! Or links to pictures!
Sunday: InnoJam Starts
This was my first TechEd as a SAP Mentor and accordingly, my first InnoJam.  The first part of the day included some lectures on Gamification, product roadmap updates and lots of techie talk.  After that was over, the fun part begins: pick a ‘case’, form a team and get coding.  I thought that none of the presented cases really had a need for BusinessObjects folks, so I started packing up to head out.  But then fellow Mentor (and all around ‘Good Guy’) Vijay Vinjaysankar stopped me and asked if I was on a team.  I replied simply ‘nope’.  He looked relieved, as he had a ‘case’ that wasn’t really in the list and needed a BOBJ guy.  I told him that if that was true, then we should pick up the other BOBJ Mentors who were milling around- Greg Myers, Jaime Oswald and new ‘Mentor Cub’ Eric Vallo.  He agreed and we joined the Team 13 table: a true cast of characters: Vitaly Rudynski, Jon Reed, Gretchen Lindquist and Karin Tillotson.  Vijay’s idea was pretty neat: how do we game the ‘game’.  Make the idea about choosing the game you’re playing, as opposed to being told what the game is.   Vitaly and Vijay did the hard lifting with the HANA infrastructure, while I mocked up the data using old-school tools, mainly Excel (and some RAND functions).  Eric was our BOBJ admin guru, working with Vitaly on getting the connection from the HANA DB to BI4 up and running.  Jaime created our game dashboard using Xcelsius.  We called it a night after midnight.  Other teams were burning the midnight oil when I checked out for the night, though.
Monday: InnoJam Finale/ASUG Pre-Conference hands-on
I had volunteered to assist Ingo Hilgefort with his all day BI4 hands-on session, so I would only be able to come and help Team 13 at breaks and at lunch.   While we had some technical difficulties (not speaker or material related, but machine builds), the pre-con continued on.  I’m sure the attendees came away with lots of good information, because I know that I sure did!  I popped up to Team 13 at lunchtime, only to find that we have been renamed Team PUKR.  P.U.K.R, as in PuppiesUnicornsKittensandRainbows. We even have a Facebook page http://j.mp/psQWMt (which you should totally like!).  Greg Myers had a chance to join while I was assisting Ingo and helped Eric and Jaime out with the BOE stuff.  Karin, Gretchen and Jon were the forces behind Team PUKR’s burgeoning online and social media presence.  At InnoJam- everyone gets to work their tails off!  I got to do some more work at lunch and then headed back down to help assist Ingo, whose pre-con did NOT slow down- even with ‘technical difficulties’.

After the pre-con was done, I joined my team in time for Jane McGonigal’s keynote presentation.  While I’m going to leave the whole notion of gamification for enterprise reporting for another time, I will say that it does have its merits in specific applications.  Her keynote was fun and even included the throwing of Angry Birds to an enthusiastic crowd- and since I caught one to take home to my daughter, it was even better!  Following the keynote, it was time for the InnoJam judging.  Taking some of the advice from the InnoJam coaches, our primary speaker (Vijay) got on stage to explain Team PUKR! Not being ones for outright pandering to the judges, Gretchen only took 1 copy of Jane McGonigal’s book up, while I only mentioned that we linked to her book’s Amazon.com page a few times.  You can find the link to all of the recorded InnoJam’s right here (Team PUKR starts about 46 minutes in): http://www.sapvirtualevents.com/teched/sessiondetails.aspx?sId=72

We might not have won- but we likely had the most fun out of any team.  I appreciated the ‘likes’ from Jane McGonigal on our entry: she liked that we had ‘character’ and that we allowed for the option for people to choose the game!  A highlight for me was getting the chance to speak in front of the InnoJam crowd and have it streamed over TechEd Live Online (which I did NOT know at the time)!  When I took a look around the stage and saw 7 other SAP Mentors on stage with a HANA based, BusinessObjects Explorer Mobile and Xcelsius-fronted idea that started on a napkin and ended up on that screen in less than 24 hours- I realized that life is pretty good!!

I came into InnoJam with a preconceived notion, mainly around the fact that my particular skill-set might not be useful, only to be proven wrong.  Our team wasn’t the only team who utilized BusinessObjects, mainly Explorer Mobile.  I also believe that other teams would’ve used BusinessObjects products, had more BOBJ folks been present.  For those who have been on the fence about the whole ‘platform-agnostic’ vs ‘ERP’ BOBJ side of the fight, I believe that InnoJam allows ANY BusinessObjects developer a chance to interact with new technology and leverage your expertise.  If you have a chance to sign-on for Madrid, Bangalore or Shanghai- take it!

I’ll update the blog as soon as I get a chance to remember where and how I can post Team PUKR’s SWF file for the community to ‘game’!

In the interim, please accept this screencap: 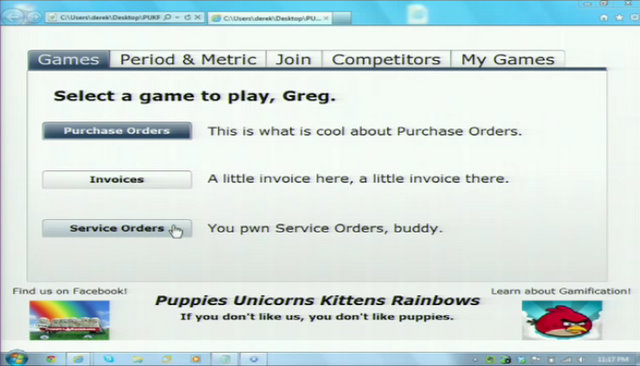 Here’s a picture of Team PUKR (minus one) from up on the InnoJam stage: 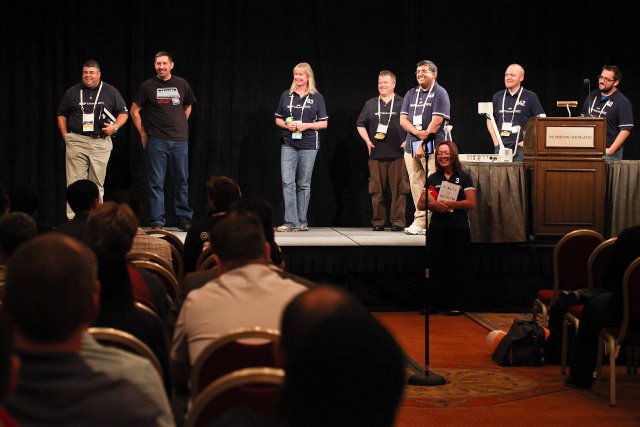 And finally, here’s my gallery of assorted TechEd 2011 shots- courtesy of SAP, Aslan Noghre-Kar and my lousy BlackBerry Tour’s camera:

Derek Loranca
Blog Post Author
September 26, 2011 at 3:19 pm
Honored to have Ingo ask me to assist him in the pre-con and had a great time there, too!

As for multi-tasking, you saw me Friday morning...I think I had reached full caffeination and sleep-deprivation levels!  Sleeping in my own bed never felt so good!

Jason Cao
September 26, 2011 at 6:24 pm
Hi Derek,
Great blog! This TechEd was something else! No better place than Vegas to go all-out and be all-in!

Susan Keohan
September 26, 2011 at 2:36 pm
I tried to get my boys to buy into the gamification of picking up dog poo, as well as folding laundry.
I think Jane should come to my house.
Thanks so much Derek, great blog!
#PUKR #winning

Derek Loranca
Blog Post Author
September 26, 2011 at 3:15 pm
Agreed.  My daughter was not into the gamification of 'doing her homework'.  Probably because the only 'achievement' was her not being punished!! 8^)

After she's done at your place, send Jane to my house, please!

Derek Loranca
Blog Post Author
September 26, 2011 at 3:11 pm
I saw you guys having a ball over there, so I bet you gave us a run for the money on the fun factor, Michelle!

I figured that I would sleep and de-caffinate when I got back to PA!

Derek Loranca
Blog Post Author
September 26, 2011 at 3:13 pm
Apparently my first comment reply has been lost to the ether of SCN!!

Your team looked like it was having a good time, too!  I'd say you'd give us a run for our money in that respect!

Jason Cao
September 26, 2011 at 6:28 pm
Hi Derek,
Great blog! This TechEd was something else!
No better place than Vegas to go all-out, and be all-in.

Derek Loranca
Blog Post Author
September 27, 2011 at 4:26 am
Agreed.  As my second TechEd, I wasn't going in totally blind, but still felt unprepared for the sheer magnitude of it all! I think that each year, I take away something new to prepare for the next...

Marilyn Pratt
September 26, 2011 at 7:37 pm
Talk about the strain of being in two events simultaneously and before the full SAP TechEd Week even started.  I would be suffering from servere dissociative identity disorder if I had to bounce back and forth between two such major events as you did for ASUG and Innojam.  Thanks for sharing your "back story".  You always find an entertaining way to describe things. Now I see why you and other Business Analytics gurus were "in and out" of innojam.  Amazingly agile.

Derek Loranca
Blog Post Author
September 27, 2011 at 4:30 am
If only I could be more 'agile' at work, too! Bouncing between both was a lot of work, but I felt that I got SO much out of doing both. It helps that my InnoJam team didn't really need me to do a whole lot of coding during the day.  I did my piece at the beginning and end, it seemed.  That gave me the flexibility to multi-task.

And thanks for the compliments, too!