A Proof of Concept by HP, Intel, SAP, SUSE, and VMware on virtualizing ERP with Intel processor based hardware and open source OS

Today, roughly 75 percent of SAP software installations are deployed on Intel® processor-based servers, including many large enterprise implementations. In most cases, these implementations are deployed on relatively large numbers of distributed four-socket or smaller servers. How can this install base benefit from the latest technology trend, including more powerful hardware, virtualization, and lower-cost open source operating systems?

SAP co-innovation Lab has just completed a PoC with 4 partners, HP, Intel, SUSE (a business unit of the Attachmate Group), and VMWare to investigate on this topic. The findings are documented in a 5 company joint whitepaper (link:  http://www.sdn.sap.com/irj/scn/go/portal/prtroot/docs/library/uuid/e0eb1f0b-15b6-2e10-69ad-f5f54c43222c?quicklink=index&overridelayout=true )

The paper describes key hardware and software advances that are especially relevant for supporting mission-critical SAP software deployments, as well as the key results of the COIL PoC.   The following figure shows the high level deployment architecture of the COIL enviroment. 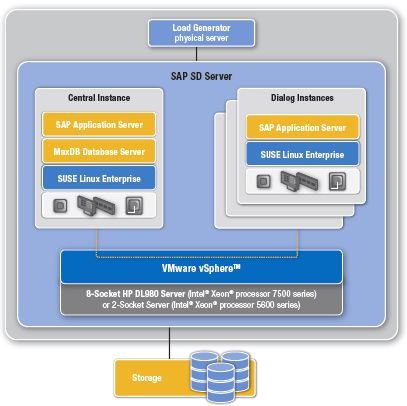 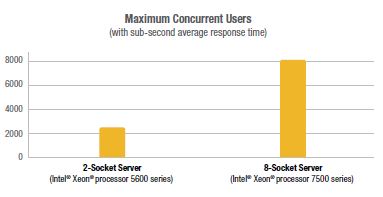 Much more details about the environment, the test setup, and the results are available in the paper. Check it out, and let us know what you think.

Would you tell, the storage vendor for this PoC. I see there were multipath options mention in the doc for DL980.

I read it as a more of XEON75xx series intro to the virtual side; though we have 8vCPU/VM.

What I wonder here in this PoC setup, we don't even get one 75xx "Physical-CPU's" value per VM; say for a 1TB+ DB in a distributed installation. This is Super "Process" virtualized for 176GB or just after installation DB plus CI VM.

Our storage vendor is NetApp.

in the case of the 8-socekt server tests, only the CI+DB has 176GB RAM and 8vCPU, all the DIs were allocated 4vPCU and 16 GB RAM.