I went to a Tech Ed (note the space, we’ll get back to that)  conference once in my past life as a Microsoft beat reporter. It was a  HUGE confab for the Microsoft faithful – Visual Studio banners adorned  the walls – held in the gargantuan cement box known as the Los Angeles  Convention Center.

My feet felt sore for three straight days. I can’t even imagine what  torture it was for the high-heeled women – and there were some there,  surprisingly – in attendance.  With Microsoft Tech Ed feeling like a New Year’s Eve in Times Square, I was initially hoping that next week’s SAP TechEd in the Venetian Hotel in Las Vegas would feel like a smallish dinner party by comparison. I’m not optimistic.

(Side note: How did my parent company and Redmond to   erect a truce  over the nearly-identical names of their technical conferences  (Microsoft, as noted above, puts a space between the two abbreviated  words, while SAP does not)? Especially since the firms   compete in  enterprise software and for the hearts and minds of tens of   thousands  of the same developers? Especially since the conferences were    reportedly started only TWO YEARS APART from each other (1993 for Microsoft’s Technical Education conference, 1995 for SAP’s).    Can a nearly-imperceptible difference really be enough to prevent the  lawyers from being   unleashed? Am I kicking a hornet’s nest/picking a  scab by mentioning   this? Should I stop with the rhetorical questions already????)

SAP TechEd is expected to draw 16,000 attendees this year. Granted,  that’s spread across four events: after Vegas, TechEd will hit  Bangalore, Madrid and then Beijing. But Vegas remains the big draw.

Moreover, TechEd 2011 will, for the first time, include Sybase’s user and developer conference, TechWave.  This will only boost the overall attendance. If you’re coming, expect  to learn about everything from scalability improvements in the ASE  database to the latest boosts to the pattern-recognition features of  analytics server Sybase IQ, to the latest mobile commerce offerings from  Sybase 365.

The theme of this year’s TechEd is gamification, or what I  call “developers putting explosion sounds into spreadsheets apropos of  nothing”. TOTALLY KIDDING. As someone who is both easily bored and  instinctively competitive, I’m totally in favor of techniques that make  work more interesting and fun.

Anyway, there is plenty to see surrounding enterprise mobility. Here’s a preview.

(Side note 2: If you’re not coming to Vegas, there are many ways to keep up to date:

You can also come to SAP TechEd in Asia and elsewhere, or the SAP World Tour 2011 events.)

1) 110+ mobile-related sessions. Here’s the list for TechWave and the list for TechEd.  If you’re an analyst or SAP Mentor or journalist, chances are that you’re invited to Tuesday afternoon’s mobility panel.

I’ll be moderating a group of experts including Nick Brown, senior vice-president for strategy in SAP’s Mobile Applications Unit, Himagiri Mukkamala, senior director of engineering for Sybase on its Sybase Unwired Platform and Girish Ogirala,  director of the mobility practice for Cognizant, the $5-billion-a-year  IT services provider. Expect an interesting debate around apps,  platforms and more.

2) SUP 2.1 news. It’s no surprise that  Sybase will be unveiling improvements to the Sybase Unwired Platform  (SUP) at TechEd, in particular with the SDK. The SDK is significant, as  important as SUP 2.0’s debut of hybrid Web containers for easy cross-platform development at SAPPHIRE just 4 months earlier.

SUP, if you hadn’t heard, is being embraced by customers – nearly half a billion dollars worth of business in a year, as ZDNet’s Dennis Howlett revealed this week.  it’s fast becoming the middleware of choice for enterprise app  development.

3) Appjam. One of the criticisms levied by lighterweight,  cloud-based competitors is that SUP is hard to learn and deploy.  Increasingly, that charge doesn’t stick. Witness the Mobility InnoJam held by SAP earlier this summer. SUP newbies were writing true,  working, cross-platform apps running on SUP in a matter of hours.

According to SAP Mobility InnoJam – Palo Alto, CA, the winning app was mostly written in just 4 hours.  There will also be an InnoJam at  TechEd. The coding will take place in the 20-something hours between  10:30 pm Sunday night and Monday night 7:00 pm, fueled by ungodly  amounts of junk food, no doubt.

The winners of the even more prestigious  Demo Jam will  be announced on Tuesday night. The winner of the earlier SAP Mobility  Innojam, the awesomely-named Awesome Service Notification Management app  built by developers from Intel, Genentech and IGT, is one of the  finalists for Demo Jam. Sybase will also announce the winner of its  Mobility Innovation Award, which I’ve heard is an Israeli startup.

So for those who interested in the best that the SAP ecosystem has to  offer, there will be plenty to see. And as at SAPPHIRE, expect SAP at  TechEd to show off the apps it is developing in-house, such as in the  areas of field service, retail, and human resources.

4) Enterprise App Store. Sybase Afaria – which repeated again for the tenth year in the row as the mobile device management (MDM) market leader, according to IDC – is the third part of SAP’s mobility story. Look for a new tie-up between Afaria and Apple’s new Volume Purchase Programing for Businesses that will make it even easier for IT to manage app deployment.

On a related note, the September issue of the Enterprise Mobility newsletter from SAP and Sybase is out. Below’s a snapshot of the latest issue. You can subscribe here. 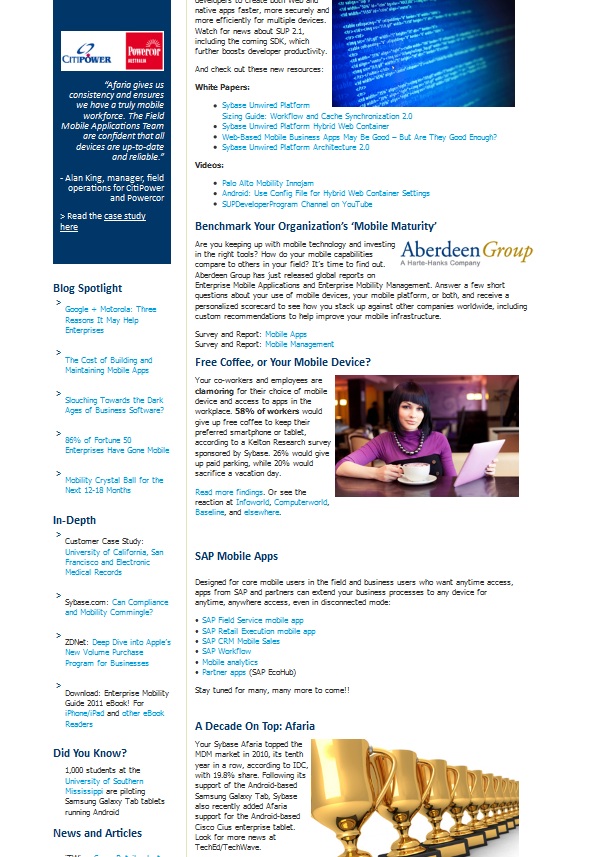