This is part 2 of a blog series “Implementing & Sustaining Interfaces in SAP ERP applications”. The complete list of blogs in this series can be accessed from my weblogs. Implementing & Sustaining SAP ERP Interfaces – Part 1, Essence of Interfaces explained why interfaces need special attention and why it is important to have a strategy to deal with interfaces. This part explains what an interface strategy contains and what needs to be addressed in the strategy.

SAP projects vary largely in their nature and approach. Those that identify interfaces as a “critical success criteria” would usually estabilish a strategy for interfaces. And, they should. But often, I come across SAP projects and SAP IT teams that do not have a strategy. Sometimes, it is because they do not think it is critical to do so. Sometimes they dont want to invest in the extra cost to estabilish and implement one. Sometimes, they are ignorant of its importance. But invariably, it is always vital to estabilish an interface strategy, even when it not very apparent to do so.

For instance, in a phased implementation, there may not be many interfaces or any critical ones during the first phase. But that does not mean that an interface strategy is not required. SAP systems have a very long lifetime, and sooner or later, invariably, either during the subsequent phases of the project or during operational enhancements, it will be required to build critical interfaces. However, at that point of time, it may be late to build a strategy given other constraints like budget, reduced team size, lesser think tank and other operational priorities. Even if you did, interfaces built until then would not be consistent with the new strategy.

Having said that, I would also say that it is never too late to build a strategy for interfaces. Building one would identify gaps and risks in your systems that can be addressed in future improvement projects and help you be prepared.

What makes up an interface strategy? 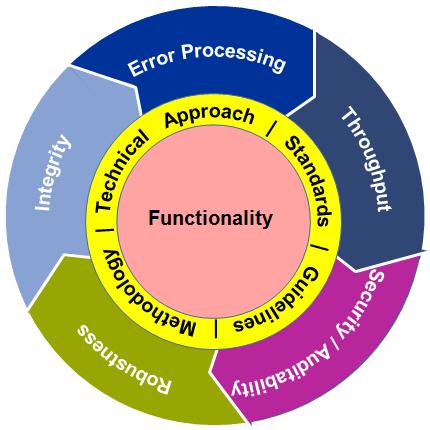 2. Standards – What protocols are allowed? What are the naming conventions for filenames, RFCs, Web Services, file directories etc.? Which techniques are obligated, limited or restricted?

3. Guidelines – Which techniques are to be used for different scenarios? Synchronous or Asynchronous? Whats the error handling mechanism?  What security is used? How is performance measured? How external and internal interfaces are handled differently? What are the translation options to use? Where is translation done?

4. Methodology – What processes are followed? What methods are used for requirement elicitation, evaluation, design, building, testing, implementing and maintaining interfaces? What would be the review process and who does it? How is quality ensured? How the strategy enforced.

Together, these 4 sections should address the 5 major concerns in interfaces

2. Error Processing of interface errors – Is the error handling manageable? Is there sound error reporting? Is error handling easy and usuable? Are error fixes auditable and secure?

A reliable and high performing interface would have all these aspects of an interface covered. A sound interface strategy is one that can produce the such reliable interfaces, when they are built using the guidelines, standards, approach and methodology defined in the strategy

In the next part of the blog, I’ll illustrate a simple interface to explain the common pittfalls in interfaces and how the above concerns can be easily overlooked in such scenarios interface.

Have you thought about the organizational ownership of integration part as well?

Former Member
Blog Post Author
September 6, 2011 at 6:25 am
Hello Prabhu,
Thanks for your kind words.

I havent planned too much to write on the project management and business alignment part of it. But I have some plans to write about branding the interfaces. I'll try to address some of the ownership constraints as well. You are welcome to add to it.

But I'm going to take a while to get there since the next few parts are heavy on the design aspect of this.