In a break from the summer heat, I met SAP Mentor Greg Myers to carpool and headed down to Newtown Square.  We made decent time and made it early enough to catch up with a bunch of people I haven’t seen in a while!  Fellow Mentors Marilyn Pratt and Tammy Powlas all came in bright in early after long drives,  as well as #SAPITNSQ organizer Rich Heilman.  Jay Riddle was there prepping his presentation after flying in from Atlanta, GA the night before.  But the award for furthest distance traveled was set by SAP Mentor John Appleby from the UK’s Bluefin Solutions.  A light breakfast was ready and we were off and running!

‘SAP Runs SAP’ (Chip Rodgers & Mike Golz)
This was a great session opened by Chip, who had a chance to show everyone the latest SCN Jive update and video posted on YouTube. It was great to see that the ‘new’ SCN is coming along nicely!  Chip always gives a great presentation surrounding social media and specifically the juggernaut that is SCN.  He turned the stage over to Mike Golz, Chief Information Officer, SAP Americas.  Mike’s presentation definitely captured my attention.  Nice to hear that a vendor is using their own product and are aggressively ramping up internally to use the newer versions.  The discussion surrounding SAP’s rollout of support for personal devices was truly interesting to me.  I think that this is a particularly simple way of increasing employee productivity and happiness, with little expense or risk for the employee.  The employer is on the hook for no physical hardware or monthly connection fees.  The only cost for the employee is for the connectivity piece to the internal network (and any support they want to offer).    Employees can bring their own devices, agree to the terms presented by the company and then attach them to the network.  What the company gets is a mobile-enabled workforce with the majority of the cost borne by the employee.  If an employee is truly a ‘mobile worker’, then the company should provide them with the equipment they’re going to need.  But if the employee is only mobile ‘part-time’ or wants to be able to be productive off-hours or off-site, then the personal device strategy seems to make a lot of sense.  Sounds like a separate blog topic, to me!!  After Mike and Chip’s session, it was time to move out to the breakout sessions!
Chip Rodgers talking about SCN: (link) 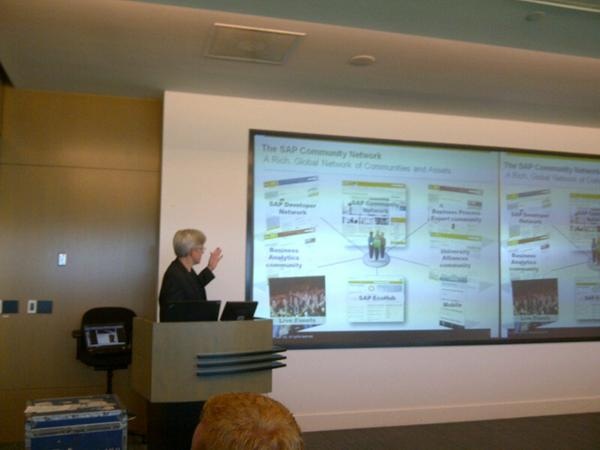 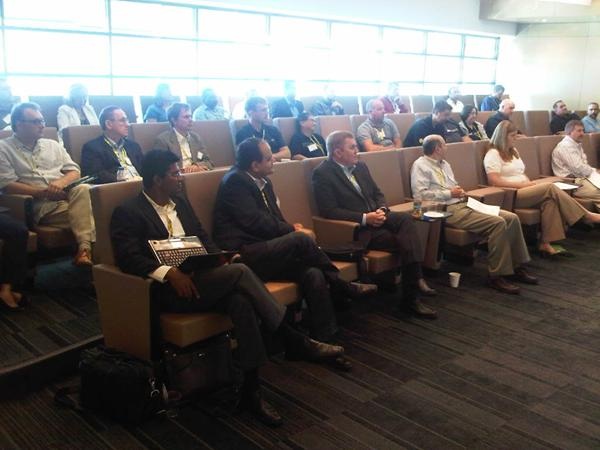 IT201: SAP Query- Expand Your Use with Enhancement Package 5 and BusinessObjects (Tammy Powlas)
I got into the session room a bit late, but Tammy was well on her way holding court about how to tie in BOBJ with SAP Query, using the features Enhancement Package 5 brought to the table.  She had some great video captures of the examples she was talking about.  This was a fun session, especially for someone like me with only a little ERP ‘side of the house’ practical experience!
Tammy talking about SAP datasources: (link) 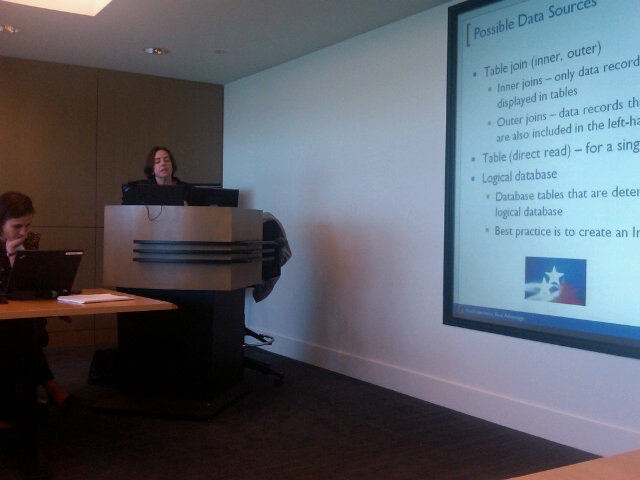 IT202: Planning for Peak Performance with SAP BusinessObjects BI Platform (Greg Myers)
For everyone who loves to be a ‘beta tester’, this was the session for you.  Greg was kind enough to give us a sneak preview of his 8/17 SCN-SAP EcoHub presentation on setting up and monitoring your BOE environment for peak performance.  Some of the more memorable quotes that came out included things like ‘Math is your friend’ and ‘100% CPU utilization isn’t a bad thing, unless it’s all the time’!  This was a fun session and if you’re a BOE server admin, I highly recommend checking out the replay!  You will get tips on how to use auditor data and Microsoft Excel to do some basic server performance forecasting.
Greg holding court: (link) 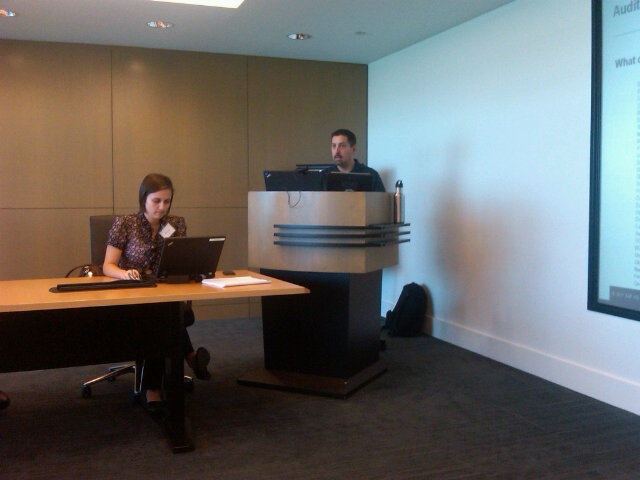 IT203: ASUG Influence: Is SAP listening? Make your voice heard! (Tammy Powlas & Derek Loranca)
As Community Facilitators for the ASUG Business Intelligence Community, Tammy and I have been thinking about doing a session to give the public an opportunity to hear about ASUG Influence and the Business Intelligence products.  We put together the slides and for a session and tried to have a lot of fun.  Since we didn’t really do a dry run, there was a lot of ‘your turn’, but in my opinion- that just made it a bit more lighthearted!  Both of us believe very strongly that ASUG Influence is one of the most powerful customer channels back to the vendor and SAP seems to agree with us.  We gave an update of the BI Influence Councils that are chartered or kicking off and invite anyone who is at TechEd or SBOUC, to come to an Influence session.  The councils will take the feedback from these sessions directly back to SAP.
Having fun presenting: (link) 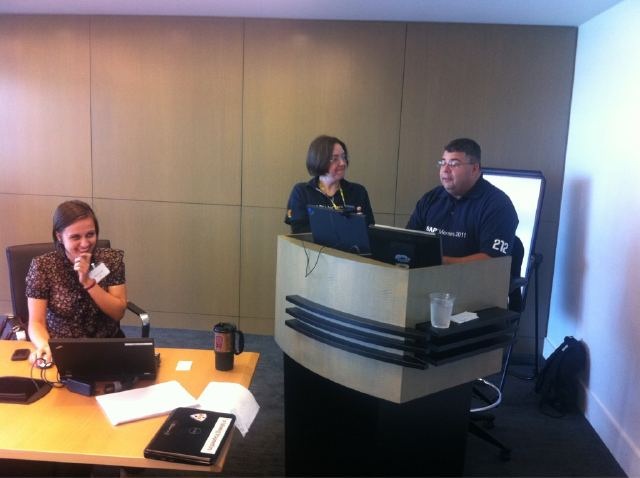 And a big thanks for SCN’s own Sylvia Santelli who was our Adobe Connect/Room Moderator!! (link) 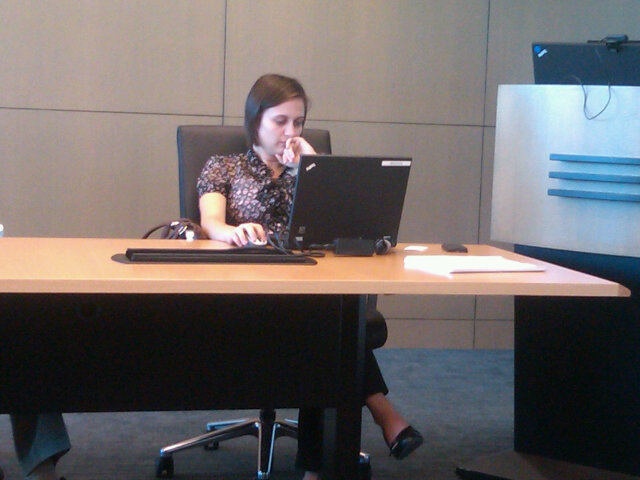 Lunch
What can you say…it’s the cafeteria at SAP’s North American headquarters
IT104: HANA (John Appleby)
John spent some time this morning ‘polishing’ his presentation, but it didn’t show!  Seriously, this was a great informative session on HANA.   Starting off with good ‘what it is’ and ‘how can you use it’ information, leading to detailed discussions regarding implementation, hardware vendors and even *gasp* pricing estimates.  John was even gracious enough to withstand some good natured barbs from the folks on the webcast.  And to be honest, I kind of helped out from the audience, too.  But Jon Reed said it best about this session via Twitter: ‘Brilliant…@applebyj just set the standard for a HANA presentation.’  I would have to agree and urge anyone interested in HANA to check it out.  Especially if you have a sense of humor!
John (probably ignoring a comment from Dennis Howlett or Jon Reed): (link) 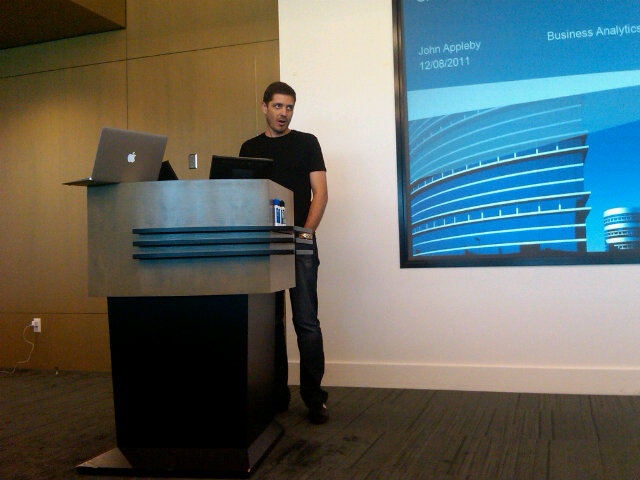 IT305: Preparing for SAP BusinessObjects BI 4.0 – Insights into New Features, SAP Integration, and Sizing Guidelines (Jay Riddle)
A caffeinated Jay Riddle gave a funny and informative presentation covering BI4 including some of the integration and sizing pitfalls he’s come across.  Jay’s always entertaining to watch and was definitely a perfect fit for the mid-afternoon session.  If you were tired or sleepy before his session, he sure woke you up!
Jay getting ‘all riled up’ (according to Greg Myers): (link) 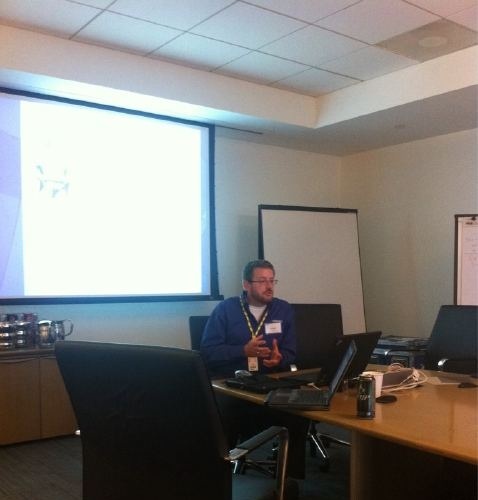 IT306: Meet an SCN Blog Moderator (Marilyn Pratt & Tammy Powlas)
Based on an idea from Stephen Johannes ‘Meet an SCN Forum Moderator’ at TechEd, Tammy and Marilyn teamed up to present a light-hearted look at what an SCN Moderator does.  They also covered why they do things the way they do, as well as what a new blogger can expect.  Some of the more in-depth discussions in the room centered on cross-posting blogs from other sites, as well as those blog entries that can be considered ‘sales pitches.  I had a really good time listening to what it takes to be a mod, as well as some of the stuff that new bloggers try to get through on them!!
Great caption by Greg ‘SCN Blog Goddesses’! (link) 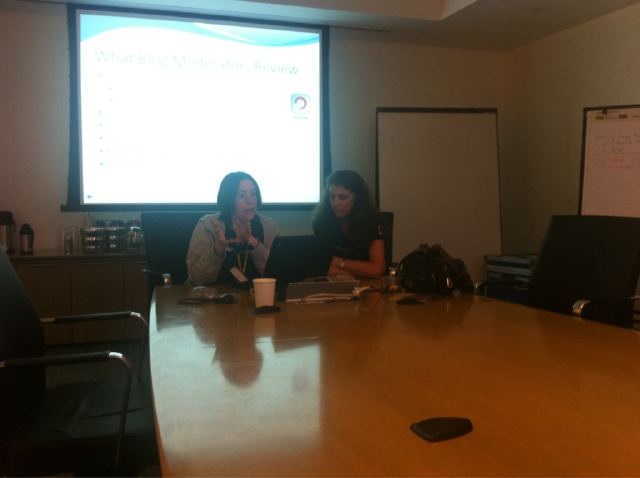 IT107: Creating Mobile Applications with SAP Gateway Odata Channel (John Astill)
Since we had a cancellation in schedule, John offered up to repeat his prior session, mainly to accommodate the people who were in Marilyn’s session it seemed!  Joining John in the room were an engaged posse of SAP Mentors (Tammy, Greg, Marilyn, Rich, John Appleby and myself), as well as Jay Riddle, Sylvia Santelli and Greg Misiorek.  I had a great time listening and interacting with John and he coded an iOs application right in front of us.  While not a GUI programmer, John made it easy to follow along and answered all of my stupid questions with real answers!  There’s nothing quite like watching someone talk about the code and then show you the output right there.
Picture courtesy of Jay Riddle: (link) 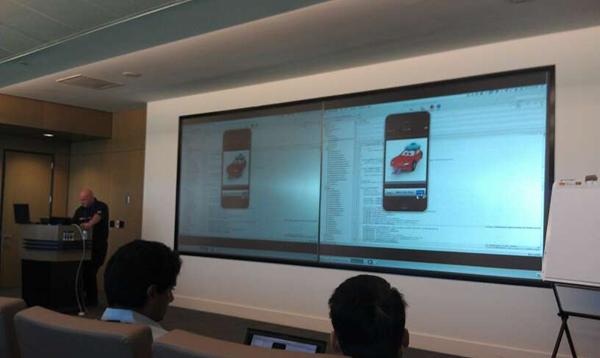 Wrap-Up
Rich led a wrap-up session with those attendees brave enough to stay to the end.  We got some great feedback, especially regarding the timing.  That is definitely something we’ll remedy for next year, but given only 3 weeks to organize and publicize- I think we had great attendance.  Some of the other comments, including how to make it so the presenters talk to the audience and not the camera were taken to heart.  Definitely something to keep in mind.  I’ve got some ideas already working up around that for next years #SAPITNSQ.
Cocktails!
A hearty thanks to SAP for sponsoring a post Inside track networking reception!  I know that I had a blast catching up with everyone who stayed around.  I got home much later than I thought I would!
Last Word
Given the shortened time crunch, I think the turnout was great.  One wrap-up suggestion that I really liked was a suggestion that on the new SCN, maybe a placeholder can be put on the front page highlighting Inside Tracks worldwide.  This would be a great feature to drive attendance and publicize all of the Inside Tracks.
Last year, my first SCN blog post was called ‘Inside Track Made me Do It’.  And to think that a year later, I would be helping in planning that same Inside Track.  To those who are on the fence about helping to organize or even attend an Inside Track: JUST DO IT!