Similar in function to the Dynamic Hierarchy Editor available in BPC 7.x versions, the SAP Business Objects Planning and Consolidation 10.0, version for Netweaver (BPC10NW), Ownership Manager allows the definition of complex holding/subsidiary relationships that can be time, category, and scope specific.  The organizational structures defined by Ownership Manager are also used by the Consolidation Monitor and the Controls Monitor to display and status the defined organizational levels.

New to the Ownership Manager functionality is the ability for the BPC system to propose key consolidation parameters.

There are three main prerequisites for activating system calculations for ownership manager:

Using the Direct Share method, the ultimate percent ownership of S2 is 50%.

PCTRL identifies the ultimate percent of control for each entity in a model.

POWN_SYS is populated by the system to store the generated proposal for the financial interest rate, or percent shares owned. Shares Owned contains the number of shares and voting shares that an entity owns of another entity.

The IS_INPUT property for the O_ACCOUNT dimension identifies the dimension members which can be displayed in the Ownership Manager hierarchy display.

The Method Business Rule table supports the Ownership Manager calculations by identifying a relationship between a range of shares allowing a system derived consolidation method (METHOD) as well as a proposed Financial Interest Rate (PCON):

Note the unique syntax for identifying the share ranges.

In the following example: 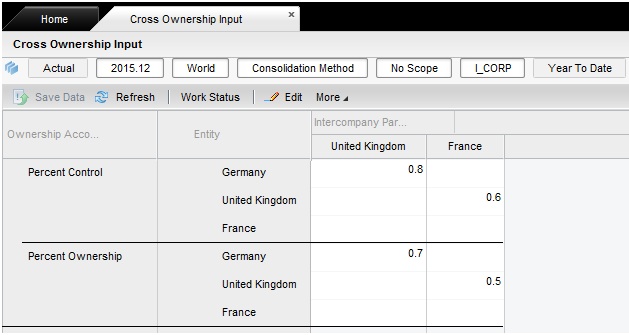 Note: Share and control data must be entered without any scope (group) specification (i.e.: S_NONE).

Once all prerequisites have been completed, the user can request system generated ownership manager calculation through the CALCULATE option available in the edit mode of the ownership definition: 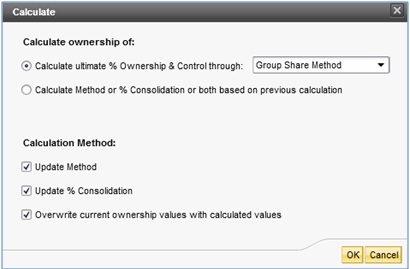 User can select the accounting principle for calculating the ultimate ownership and control (Direct or Group share methods).

A graphical illustration of the data flow between the three prerequisites: 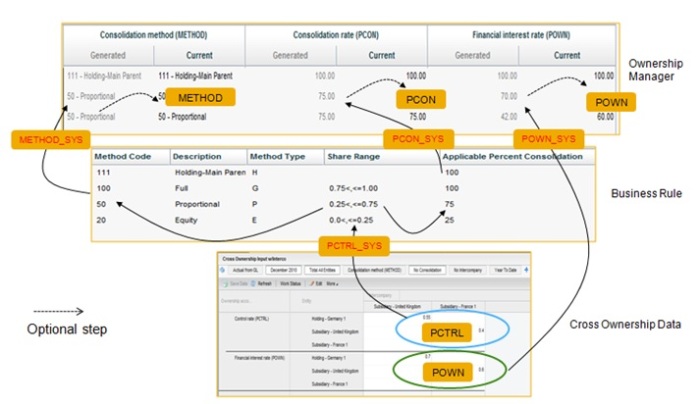