One of the most difficult challenges for the SAP BusinessObjects Enterprise administrator can be to get a grip on what exactly is consuming the resources of their application servers.  More specifically, it is important to understand whether this resource consumption is due to over utilization or due to a performance issue with the application itself.  Prior to the release of the remote support component add-on (and Solution Manager) for SAP BusinessObjects Enterprise, there were a few tools and techniques used by SAP support to analyze this type of problem.  These tools commonly include JConsole for JVM monitoring, Samurai for thread analysis, and SAP Memory Analyzer, an eclipse plug-in for examining JVM heap dumps.  Although very useful, sometimes these utilities are not enough to gain the right insight to solve tricky performance issues.  This type of situation is where remote support component shines by providing detailed analysis of internal processes which can be tracked on a historical basis and then examined easily and effectively via the Wily Introscope workstation.  Conveniently, this examination of performance data can take place in real-time in the actual SAP BusinessObjects Environment or off-site and offline by an SAP support consultant or developer.

In a recent technical support incident, remote support component was the tool that made the difference and was able to provide the much needed answers.  Based on the analysis of the data collected by remote support component, the BusinessObjects administrator was able to confidently make adjustments to their application server tier and ultimately resolve the performance issues.

So, what was the issue?

The application server tier in this SAP BusinessObjects Enterprise XI3.1 SP2 landscape consists of four Apache Tomcat servers fronted by a hardware load balancer.  In this weblog, we will refer to the individual Tomcat servers as 1, 2, 3, and 4.  Users of this environment mainly view and edit Web Intelligence documents and the environment is utilized twenty four hours a day.  Frequently, the Tomcat server was crashing on different nodes in the cluster causing end-users to be load balanced to other nodes.  The problem was particularly evident in Tomcat instance 4 as this was the server that crashed most often.  In contrast, instance 1 was found to not ever crash.  Further inspection of the heap dump revealed that the root cause of the crashing was due to Java heap out of memory.  Each node in the cluster was set to have a maximum memory of 1.3 gigabytes.  As a workaround, a nightly and sometimes daily restart of Tomcat was scheduled to release all the memory.

The initial and obvious suspicion was that there was a memory leak somewhere in the webapp code and this was causing objects to not be cleaned up, but is this really the case?  How do we prove that it is not?

Examining the heap dump revealed the number of sessions, how many objects were opened, and how much memory was used by each object, and whether there was any leak suspects.  This however did not provide a smoking gun as to the root cause and to whether or not there was a real memory leak.  So, remote support component was installed and configured to monitor the entire Apache Tomcat landscape.  Performance data was collected for several days including Monday, which was the day in which the peak load on the environment could be expected.  The data was subsequently zipped up and sent to SAP support for analysis.

Let’s take a look at the data that was collected by remote support component.

In the graph above we see a breakdown of total heap memory (OutOfMemory indicator) used for each of the four nodes in the cluster.  This data is filtered inside Wily Introscope workstation so that only 24 hours of data is displayed.  The time range here corresponds to the busiest day of the week which is Monday to Tuesday.

Immediately we can deduce the following information:

This is very useful information, but what about the memory leak?  As a reference, let’s first have a look at the resources used in our lab here at SAP. 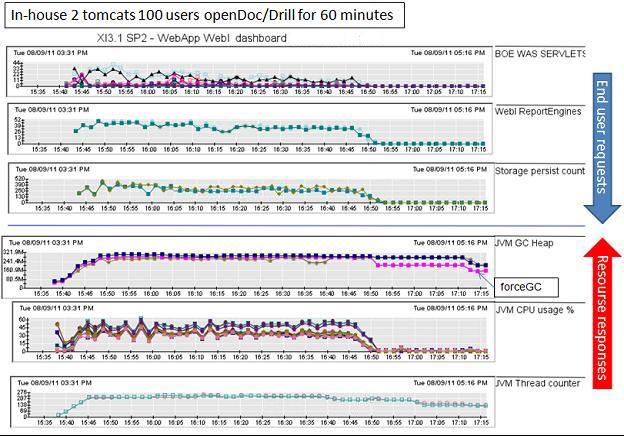 Now, we take a closer look at our most problematic server 4 and focus on Webi ReportEngines created and the total Heap size. 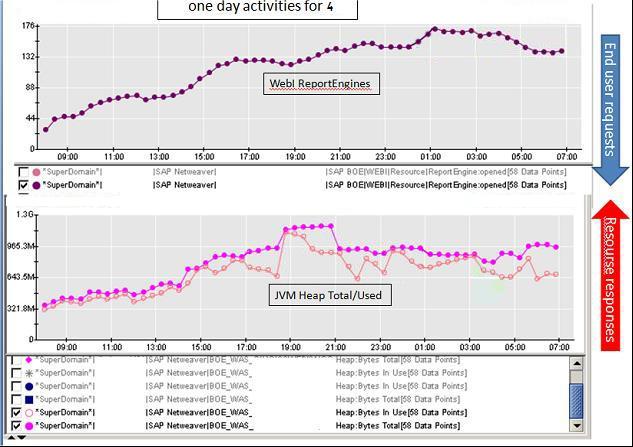 From the above data we can see that as the number of Webi ReportEngine objects increases the heap size increases as well.  At 21:00 hours, we were at a near risk of an OutOfMemory condition.  However, as usage decreased slightly, garbage collection kicked in and the total heap size decreased and stabilized.  Then, even as the number of Webi ReportEngines increased, the heap remained stable.

With the help of remote support component, we can definitively conclude:

Jonathan Brown
August 17, 2011 at 9:31 am
This is a perfect example of how to use the Remote Support Component (and logic) to determine root cause.  Great walk-through Toby.

Glad to see RSC in action.  This is a well written example of how root cause analysis can be performed with the help of Remote Support Component.

Former Member
August 17, 2011 at 10:49 am
This is an excellent blog and certainly highlights the importance of RDC. Thank you. Does anyone here know when RDC for XI3 SP3 is expected to release?

RSC SP3 will be released in Sept 2011.  Check out this blog for more info!

Denis Konovalov
August 24, 2011 at 3:17 am
Best part about this example - no webi traces collection, no tomcat logs...
Which saves tremendous amount of time.

One thing is missing from the this example, in my opinion, are the details on how RSC was deployed in this situation.
What components were installed on tomcat servers, what was installed on webi servers etc...