Getting from Virginia to Newtown Square, Pennsylvania

I left my house at 4:30 a.m. Friday morning  as Google Maps said it would take 2 hours and 52 minutes to get to Newtown Square.  Fortunately, I had no traffic tie ups anywhere (quite unusual for I-95 north) so I made it in 2 hours and 20 minutes and stopped at Starbucks.

Chip Rodgers provided an overview of the New SCN as described inMark Yolton’s blog and the upcoming events, especially TechED.

Next Mike Golz, who is SAP CIO of North America, discussed SAP’s IT strategy and how SAP “eats its own dog food” by using their own products, including CO-PA HANA.  He offered to help and engage with customers.  He was also a sponsor for this Inside Track so we say thanks Mike!

Some of the Sessions I attended

I attended SAP Mentor Greg Myers’ session Planning for Peak Performance with SAP BusinessObjects BI Platform.  If you missed this great session, you can attend this SCN webinar online on Wednesday, August 17 – this is an SCN Business Analytics Webinar.  Register here. 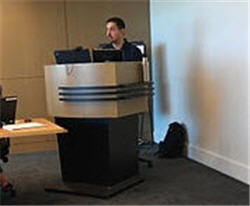 This is Greg Myers presenting his session.

Then over 80+ people (and 30 people online) attended John Appleby’s HANA session. What was interesting too about this session was the online chat interaction.

Here’s a picture of John at the end of the day as we’re listening to Rich Heilman wrap up the day: 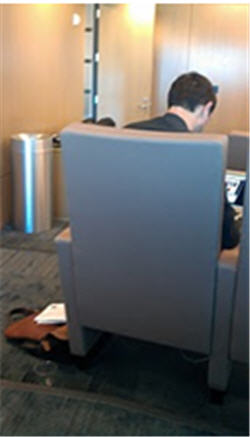 I included this photo of John as Marilyn expressed concern that she didn’t get any pictures of him.

In a fun session Derek Loranca and I discussed ASUG BI Influence Councils.  Derek and I had no rehearsal on this; on Monday I sent him 25 slides and we’re presenting 53 slides that I had not seen before this session.  “Your turn, Derek”  “No, I think it is your turn”.

I want to thank Sylvia Santelli for moderating our sessions.  The message Derek and I both had to share are that ASUG Influence councils are the best value of being an ASUG member.

Last year I attended SAP Mentor Stephen Johannes’ Meet an SCN Moderator networking session at SAP TechEd Las Vegas.  Borrowing this idea from Stephen I approached Marilyn Pratt about doing a round table like session where we heard from the community about blogging on SCN.  Marilyn discussed the Jive migration and future incentives for top contributors.  I hope we see more new bloggers on SCN; I spoke of the encouragement that Marilyn and Jim Spath gave me when I first started blogging on SCN.

Greg Myers provided several blogging suggestions for improvements that I hope he puts in Idea Place.  Greg Misiorek, who is very active on SCN, also attended this session and asked questions.  He drove all the way from Connecticut.

Special thanks to Anne-Katrin Hempel, who moderated this session and always told us when to speak up.

The Session so Nice He Covered it Twice

I want to thank SAP Mentor John Astill, who did his Gateway presentation twice since there was a speaker cancellation.  John had no PowerPoint slides – he did live coding in his session “Creating Mobile Applications with SAP Gateway Odata Channel”.

While I didn’t get to attend Peter McNulty’s sessions it was good to see him in person.  If you are attending SAP TechED I highly recommend his  ASUG pre-con session Realizing Value Throughout the Lifecycle of a Business Process.  I have attended Peter’s ASUG pre-conference sessions before and they are not to be missed.

Michelle Crapo calls SAP Inside Tracks a “free mini TechED”.  They are about networking and community sharing.  I want to thank Rich Heilman and the team for organizing this and thank you SAP for sponsoring this great event.