Last week at the SAP Australia User Group conference I was given the opportunity to deliver a presentation on my organization’s adventures into mobility, front-ending SAP as the ‘system of record’.  I know that HANA is all the rage, but there was certainly no lack of interest in mobility if the size of the audience is anything to go by (hint: place the word ‘mobility’ in your presentation and you will always fill the room). 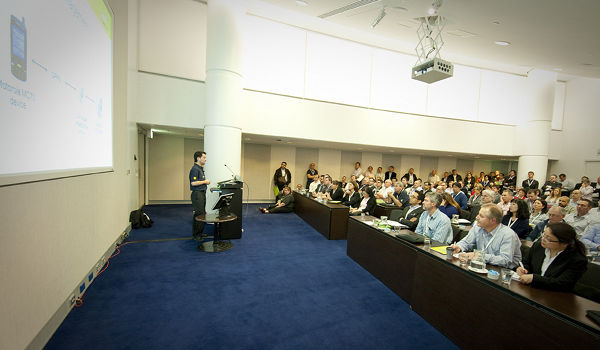 I covered several mobility stories, ranging from the heavy duty solutions that have been implemented (involving over 6000 handsets, with as many as 2.5 million transactions per day flowing back into SAP systems) through to the use of SAP interactive forms by Adobe (IFbA) on Windows 7 tablets (why, you ask? … well, let’s leave that discussion for another day).

Attending the event, I was able to gauge where other SAP customers were at with their mobility initiatives.  And I was particularly thrilled to meet the legendary R “Ray” Wang from Constellation Research and tap into his thoughts and expertise as an analyst.

That event was followed this week by the SAP World Tour landing in Melbourne, including the presence of SAP co-CEO Bill McDermott with the morning keynote. What I wanted from this event was to get a status check on the progress of SAP’s mobile apps.  I cast my mind back to an announcement by SAP and Sybase during SAPPHIRE NOW in May this year where a number of planned mobile apps were announced.  So this week I wanted to see first hand where these apps were at.  After all, to unlock the value in any platform you need to have the apps as well, and the more apps that are available then the more compelling is the platform.

Here are my observations from seeing and (in some cases) road testing these apps during the event:

Here is what I learned from speaking with various SAP representatives:

What I would like to see SAP provide to customers going forward:

At the World Tour event we heard the familiar phrase that ‘mobile is the new desktop’.  I believe that SAP is at a crucial juncture, whereby the opportunity is here right now to deliver great user interfaces to customers and bring a fresh sense of ‘joy of use’ to SAP applications.  I can’t wait to see what is available by the time I arrive at TechEd in Las Vegas.