“Programmers are lazy” – InnoJam them!

That’s the summary (ok paraphrased by me) that a particularly inaccurate reporter gave to the recent InnoJam solution that I and a team of crack* developer built.

*crack probably refering more to “crac” in the Irish Pub sense, than anything else.

A week and a bit later

I finally seem to have recovered from the lack of sleep and caught up enough on all the other things I’m supposed to be doing (well that’s not entirely true, but I hate doing housework) and so I thought I’d put a few little words down on paper about the whole thing.

Are they small enough words? Perhaps they are, and so I’d better explain them. it is quite amazing what can be achieved when you have multiple talented people, a drive to try things new, and absolutely no fear of failure, except for the fear of letting your team down. But as per the reoccurring line in the Captain Underpants series of books, before I can tell you that story, I have to tell you this one…

InnoJam Australia was not going to happen. Five lonely people had put their name on the list and stumped up $300 AUD (given the way the global markets are at the moment, I’m not even going to guess what that is worth in your local currency (unless you are in Australia, in which case if you can’t guess, have I got a money making opportunity for you!)) Unless there were 30 people with their names down, it wasn’t going to happen.  I thought it would be really good to go along, but the weekend was in Sydney (which is a decent way away), I’d be away from the family,  I’d have to convince the boss to pay for at least some of it – it was all too hard. But I still thought it would be good for Australian SAP users for us to have this sort of thing happening. So I added my support, threw out a few tweets, commented on a few blogs, Google+’d a bit , sent emails out to all the developers in the consultancy firm I work for (and a few that don’t work there too) – and finally my boss asked, “So do you really want to go?”. Obviously at this point I’d look a bit stupid if I said no. Fortunately Matt Harding had also been on the case, and HANA was now going to make an appearance, also the price had been dropped to $180 (I’ve been told this was partly due to my making such a fuss online about the price, but I can’t remember being that vocal!) So my final hurdle was to convince the family to give me the weekend off… One annual leave day booked midweek later, and I’m booked in. Still – only 15 people listed – safe bet it’s not happening.  Check again 20 people listed, no 25 listed (you sheep!), no 35 people listed – ok I’m booking flights.

Next up there were only 3 business cases listed on Idea Place. A pretty poor showing – so I thought I’d add a few. They weren’t any good really, but dig through enough  fossilised poo and occasionally you’ll find a diamond (or at least some amber). Now I failed to read the small print – and come Saturday afternoon in Sydney, I got a bit of a shock…

Earlyish Saturday morning – heading to Sydney – was going to be a nice weekend in Melbourne. 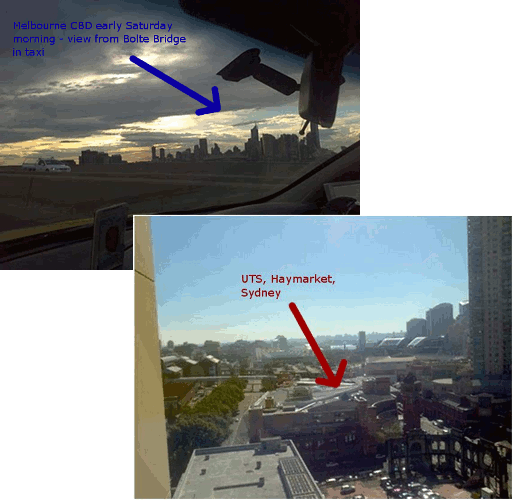 And a BEAUTIFUL one in Sydney (view from hotel) 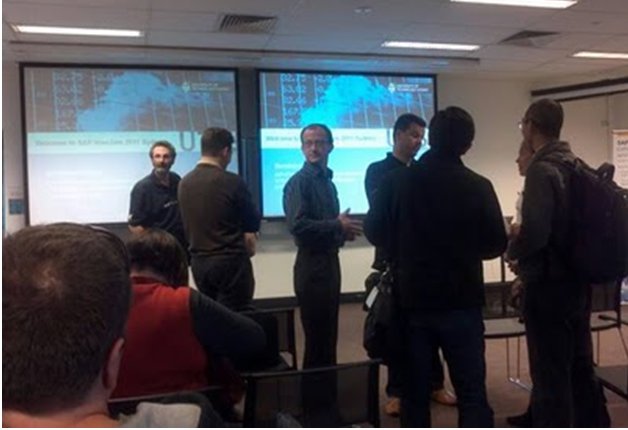 I arrived a bit early, wandered off and found a great Thai noodle place, by the time I got back, things were hotting up, we sat down and waited for the show to commence. It was at this point that I discovered I was going to be part of the show – oh… and present one of my business cases. 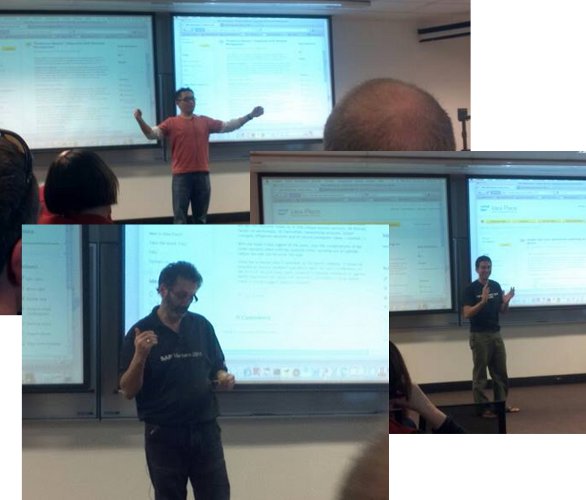 As did Simon Kemp, although I have a feeling he might have been in the same boat as me about forgetting to read the small-print.

TdT did an awesome job of presenting Sascha’s business case.  Guess that’s one of the reasons he’s a  SAP Mentor – ability to present at the drop of a hat!

In the end after a bit of fluffing about, we found ourselves divided by our own choices into 5 teams (certainly not of equal sizes or skills, but teams nevertheless). In our team we had two people who had never even touched an SAP system in their lives before 🙂 (Martin and Boris – two brothers who were holidaying in Australia and had just happened to hear about InnoJam and decided to turn up!)  But that did not stop us in any way!

So back to the original story

Ah, yes, I mentioned something about being lazy… Well, that was a tongue-in-cheek reference to the difficulty of adequately documenting custom developed ABAP code . The solution our team worked on was to extract and share UML sequence diagrams from SAP. We wanted to build on the Gravity server framework to allow the remote sharing and manipulation of UML diagrams. In the end we did manage to do this, although it was a complete hack of the business process modelling tooling of Gravity.

Something that really doesn’t get enough of a showing is the immense power of Gravity, embedded within Streamwork to allow remote collaboration.

There are some videos of me attempting to demo the solution – which are not the greatest quality, but can give you some idea of how unprepared and asleep we were at the end of 30 hours.

Including the cameraman (thank Harshit!)

Despite my poor presentations skills (or perhaps because of them) we managed to come third. Which was a incredibly strong performance considering the competition.

Having had my fair share of experience with connectivity issues, I thought I’ve make sure we had a decent slideshow for the SAUG presentation . Thank goodness we did, as it happened that 5 minutes before the presentations were about to start, the VPN to Waldorf went down and could not be coaxed back to life.  It’s not as hands on – as a demo, but might make more sense! 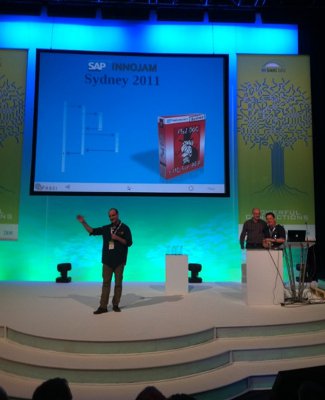 In the Prezi I touch on what was the best bit of the weekend. For me it wasn’t the tech, although that was awesome – and even without being on a team that played with it, I learn a lot about HANA from just talking to people. It wasn’t about having the experts there and real business challenges to address. It wasn’t even that we came third, although that was great. It certainly wasn’t the lack of sleep or having to put up with the smell of team members’ feet after 30+ hours without a shower. No, the best bit, was that we got to work as a team – with the only goal being to do as well as we could and no-one expecting any more than that. I’ve not had such a great team spirit in any of the projects I’ve worked on in the last few years. The closest thing is some of the social sports teams I’ve played with in the past. It was great that guys who do not regularly (or ever in this case) work together could so easily just get something happening. I think it is a huge testament to the SAP community and especially the community in Australia.

I should shout out at this point to those people who went out of their way to help us – Marek Kowalkiewicz helped us at SAUG and got us back into contact with Dan Rickets who provided us a Gravity server to install onto a local PC. Dan and Alexander Dreiling were immensely helpful during the InnoJam itself – without their help we would have never got anything showing in Gravity at all.

Rui & Juergen were awesome the whole weekend – I hope Rui recovers eventually. Next time Rui, we’ll have a meal before we go out 🙂