On July 27th and 28th July, 2011, my son Prithvi Prabahar, a sophomore in Duke University, and I attended the Mobility InnoJam in SAP Labs, Palo Alto, Ca. In my opinion, it was a life-changing event for my son. Why? Here is a list of the Top-10 reasons:

“It is not the critic who counts; not the man who points out how the strong man stumbles, or where the doer of deeds could have done them better. The credit belongs to the man who is actually in the arena, whose face is marred by dust and sweat and blood; who strives valiantly; who errs, who comes short again and again, because there is no effort without error and shortcoming; but who does actually strive to do the deeds; who knows great enthusiasms, the great devotions; who spends himself in a worthy cause; who at the best knows in the end the triumph of high achievement, and who at the worst, if he fails, at least fails while daring greatly, so that his place shall never be with those cold and timid souls who neither know victory nor defeat”.

– Excerpt from the speech “Citizenship In A Republic”, delivered at  the Sorbonne, in Paris, France on 23 April, 1910 by Theodore Roosevelt

In less than 36 hours, he truly learned the joy of failing fast, failing cheap. And he learned that the failure didn’t matter. What would matter – he learned – is “how he is going to use the knowledge and experience acquired during the event”.

9 Thinking Outside The Box

8 Career in Programming or Not…

He didn’t start programming when he was in High School. He started last year in Duke. He joined Newspaper team and started helping. He learned the programming languages and databases on the job. As a result of that experience, a non-profit organization hired him as a paid intern this summer. There he expanded his programming/hardware knowledge. During Mobility InnoJam event, he learned what corporate programming environment would look like. The rich experience he had as an intern and Palo Alto, Ca participant would help him decide how he could use his programming experience/knowledge in Biomedical engineering he is planning to major.

7 The Value of Perseverance

Since the Sybase Unwired Platform (SUP) we used was a new release, everything was not in black and white. In order to implement our idea, he had to show a lot of perseverance. I know from my experience that perseverance played a critical role in shaping my career.

6 The Power of Collaboration

He learned he didn’t need to know everything to be successful. He knew firsthand no one in that room knew everything. Everyone in the hosting team tried to help us with what they knew; they didn’t hesitate to seek help from others when they ran into an issue. In order to be successful, one should know how to leverage the knowledge/experience of others. He learned that.

We had 6 minutes to demonstrate the mobile application we developed in 30+ hours.  The technology we used, the skills we applied, the perseverance we showed, the collaborative attitude we exhibited – they mattered from our standpoint. However the judges didn’t know any of that. What equally mattered – he learned – was how we presented our app. He learned the judges judged our application solely based on our 6-minutes presentation.

He had a chance to work with the best and brightest of employees working for software companies in SV area. I guess he experienced a chaotic corporate day minus politics. He was nervous when we were driving from the hotel in SF to SAP Labs. He was nervous because he presumed he was the only one college kid attending the event (That presumption turned out to be a fact). And he was not sure how others would receive him. I was not sure as well. However soon after our arrival, he felt home.

30+ long hours he spent in Palo Alto, Ca would be – needless to say – helpful in creating a very strong resume.

He loved SV. He is already planning to do his next internship in SV area in Summer 2012. He has started collaborating with his cousin(my nephew) to find his next employer. His cousin lives in San Jose, Ca. He didn’t have any idea about SV before this visit. Some people say “you don’t know what you’re missing until it arrives”. It seems he is missing SV now. Based on InnoJam experience, he now knows he is a good fit for SV lifestyle.

As explained, he gained a lot of knowledge/experience in several areas in less than 36 hours. It was very rich and diverse knowledge/experience. As a result of that knowledge, he looks very confident. My wife says our son is a lot happier ever since he returned from Palo Alto, Ca.

We had fun attending Mobility InnoJam. We would like to thank Anne Hardy, Gigi Read, Stan Stadelman, Juergen Schmerder, Ingo and others in InnoJam team for hosting a memorable event.

Women behind Mobility InnoJam: Anne Hardy, Flavia Cheng (participant) and Gigi Reed. I hope more women – including my daughter – would participate in future. 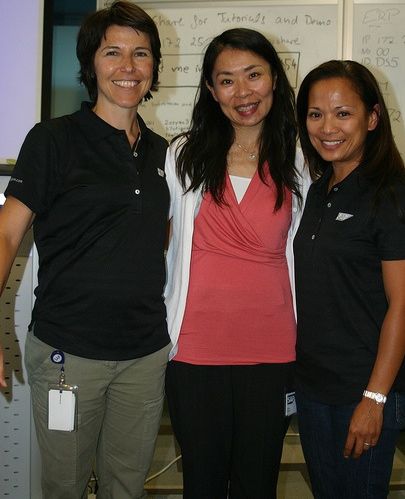 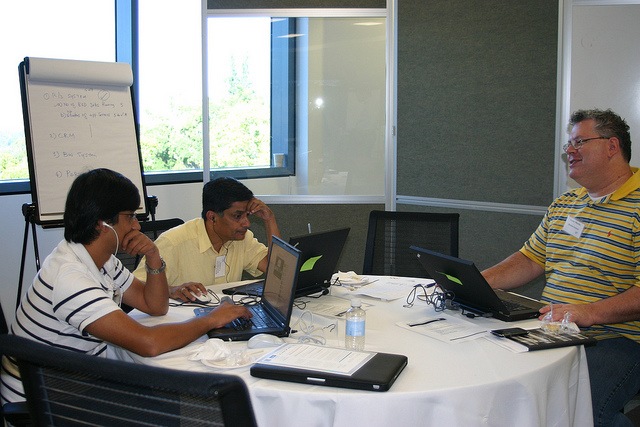 Receiving iPad2 after winning in the raffle 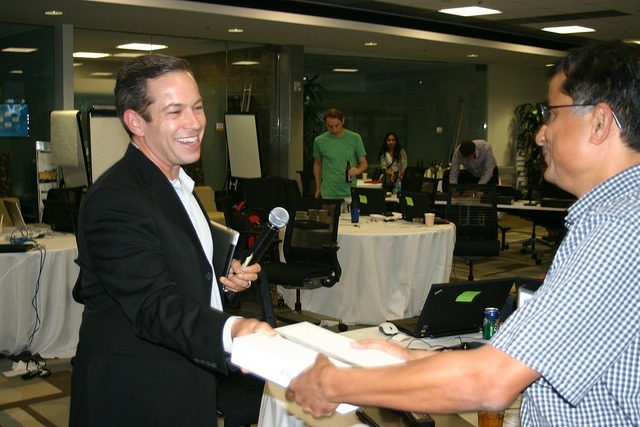 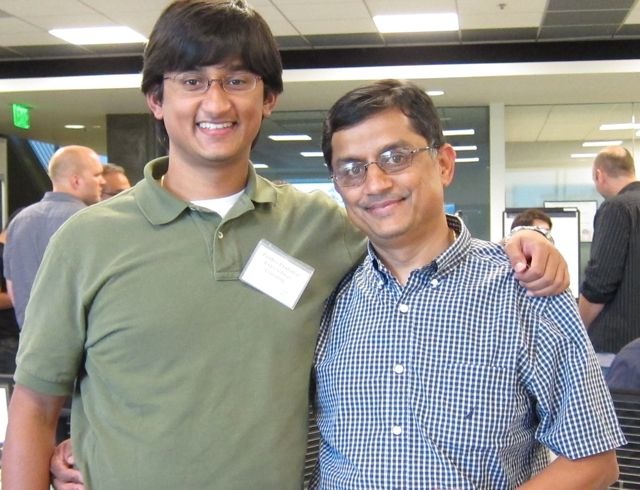 Last but not the least, The winning team 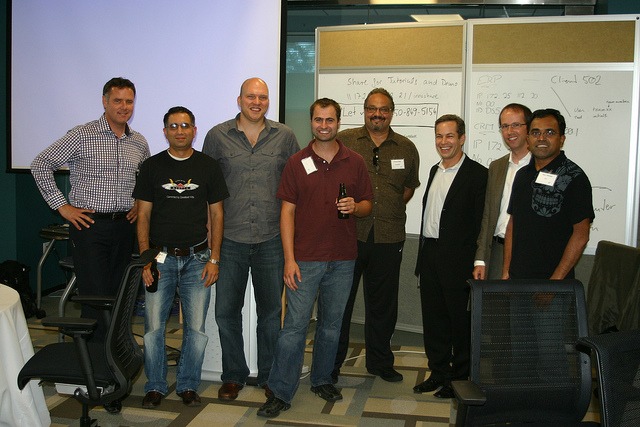 Tammy Powlas
August 7, 2011 at 11:12 am
the experiences.  What a great opportunity for you and your son.  Excellent blog, Bala.

Thank you very much. Yes, it was a great and an incredible opportunity for me and my son. Your kind words mean a lot to me.

Thanks a lot for sharing your (and your son's) take-aways from Mobility InnoJam. Glad to hear that somebody learned more than just technology 🙂
It would also be nice to read from Prithvi, so please do encourage your son share his impressions and also to participate again.
You were right, Prithvi was the only college student at Mobility InnoJam in Palo Alto - but last week in Sydney, we had an entire team of students joining our InnoJam event, and they did very well! So that's definitely something we want to see more...

Prithvi has agreed to share his impressions/thoughts in a day or two in sdn.sap.com. He's to register first, wait for approval(blog) etc so I believe it may take a week before we see his blog.
I hope he would continue to blog in sdn.sap.com. The challenge would be in finding SDN relevant topics. Let us wait and see.

Learned vs learnt? : I've not learned the difference.

Former Member
August 9, 2011 at 1:26 am
Learned vs. Learnt.  It's grammatically correct.  We just don't hear it in the states very often.

Just so you know - my grammar can be horrible at times.  That's true for a lot of "born in America" or English as a first language people.  So I wouldn't worry about it.  We make grammatical mistakes - you didn't.  I had to look it up - so again I learned / learnt something to today.

I can't speak more than one language, so anyone that can is amazing to me.  especially people like you who are fluent in "Americanized English"  (which is not correct grammatically more than it is correct.) and our slang.

See you sooner than later,

Bala Prabahar
Blog Post Author
August 9, 2011 at 5:53 pm
Thanks for that link Michelle. I learnt/learned something today.

Looking forward to seeing you in TechEd. I'm truly excited:).

Here is the link to Prithvi's blog:

A Student's Experience at SAP's Mobility InnoJam at Palo Alto

Former Member
August 8, 2011 at 2:37 am
What a fun thing to be able to do with your son.  Maybe number 11 - a lesson in just how good his father is.  Maybe he'll listen more to your words of wisdom.  Of course he maybe at a point where he already knows this.

I'm glad you both enjoyed it!  I second it, I'd love to hear your son's point of view from him.

Bala Prabahar
Blog Post Author
August 8, 2011 at 1:38 pm
Thank you. Prithvi will be blogging in a day or two, may take a week before it appears in sdn.sap.com. I'll let you and Juergen know when it is published.

Nice blog and certainly a nice father-son activity to participate in.

It's important to embrace new experiences, try out things, fail for that matter and do it all over again which leads to personal and professional growth.

Thank you. Yes, InnoJam rocks. I love that concept. Nice thing is the fact that Prithvi loves it too. He'll be in school during LV InnoJam; he doesn't want to lose two days of school two weeks into the fall session. He seriously considered attending that too.

I'm eager to read his experiences.