So your lead buyers favor e-mail/spreadsheets over e-sourcing tools Here are 12 reasons why theyre wrong!

In Europe, we sometimes hear that lead buyers claim it is easier for them to use e-mails and spreadsheets for their tendering process instead of e-sourcing tools, such as RFx and Auction in SAP Sourcing. To a large extend, this is often due to a lack of knowledge of the features available to them, which leads them to think that such tools are too heavy to use – while in practice the opposite is true, and this article attempts to demonstrate this plain fact.

But more importantly, we also see a lack of mandate from the top management. If CPO’s (and their management teams) do not believe in e-sourcing, how can they instruct their lead buyers to use it? Fortunately, SAP Benchmarking has demonstrated the correlation between usage of e-sourcing and superior performance. Dear CPO, please read carefully!

In a benchmarking report based on 800 survey responses, we learn that the Leaders (i.e., the top 25% quartile, in green below) achieve higher effectiveness (more savings) and higher efficiency (lower cost of procurement organization, less FTE’s per B€ of spend): 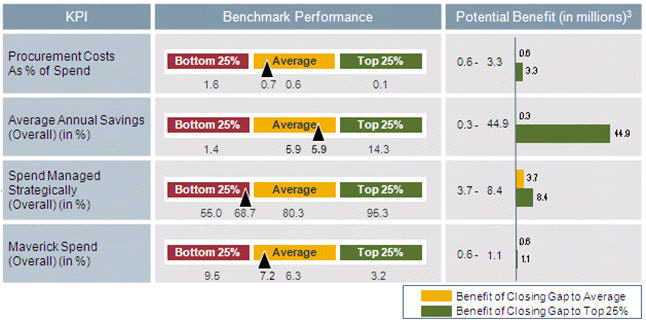 How did they achieve such a superior performance? By having implemented best practices, such as e-sourcing: 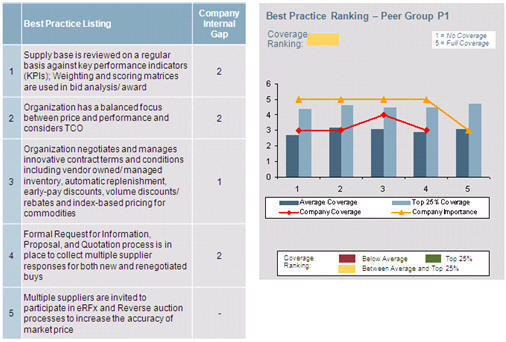 So now that we have the big picture and the conviction that e-sourcing tools increase value, read further to learn how and why.

(Note: this article focuses exclusively on the automation of requests for proposals and similar business documents, commonly referred to as “RFx”. The need for technology to support auctions is widely accepted, and well documented elsewhere, and therefore will not be discussed here).

You are a lead buyer and you have just received an alert that contract XYZ will expire in 3 months. Click on the link, log on to SAP Sourcing, Click on Actions/Create RFx:

A 5-step wizard will automatically create a new RFx by copying the collaborators, line items and incumbent supplier info. You’re ready to renegotiate… in just 5 minutes.

All lead buyers know this: some clauses are more difficult to negotiate than others. Why not then starting to negotiate them at the RFP stage, when suppliers are in a highly competitive situation and therefore more willing to be flexible than during subsequent 1-to-1 negotiation rounds?

SAP Sourcing lets you do this in a highly efficient way. If CLM is in place, all you contract clauses are available in the clause library. Simply pick the relevant clauses and add them as RFP questions:

Some buying organizations do not offer this flexibility to their suppliers, and requires from them that they accept the entire contract, take it or leave it. This process is equally supported in SAP Sourcing, since the user is able to pre-generate the ad-hoc contract at the RFx stage already:

You launched your RFP last week, and suppliers already started to answer; some of them even submitted firm bids. Horror, you notice that you forgot an important question, or some line items. Or maybe you made a mistake in the RFP content. This happens in real life, isn’t it?

In wave 8, SAP Sourcing has greatly improved in this area. Nearly all the content of an RFP can be edited after its publication, and the recall/republish procedure is versioned and fully automated. Try to achieve this without chaos if you only use spreadsheets and e-mails…

This is a really cool function in SAP Sourcing. In many cases, you will not want to run an auction as next negotiation round, either because the product/service you are sourcing is not commoditized enough, or because you wish to negotiate on features (as opposed to price).

Nothing is simpler than organizing a new round from an existing RFx:

A 3-step wizard allows you to select which suppliers should be invited to the next round and which questions and line item are still open for negotiation (vs. locked):

Don’t forget to flag the ranking option, for increased competition:

This capability creates a dynamic negotiation environment, in fact close to what you could achieve with an e-auction, with near to zero effort. It can be best used when you are reluctant to use an auction as last negotiation step (because the sourced goods/services are not commoditized, or because of company policy)

One of the invited suppliers does not understand a question, or needs more information on a line item? He can simply click on the speech balloon next to it and write down his question, which will be automatically routed to you via e-mail. You can then simply “Reply to this supplier”; or “Reply to all suppliers” if you have an equal treatment policy – no need to search for all the e-mails, no risk to forget a supplier. Cherry on the cake, all the dialogues are automatically logged in the RFx document, so that you can refer to it later.

Savvy organizations have designed sourcing methodologies which are usually modeled in the Project module of SAP Sourcing. But even at the more operational RFx level, you might wish to drive methodology at a more granular level: the RFx Schedule is meant for that.

Another frequent policy is the minimum number of suppliers that must be invited to an RFP, usually in function of the RFx value. On a customer project, we have implemented this as a script, activated when the user switches to the “Open for Response” status: 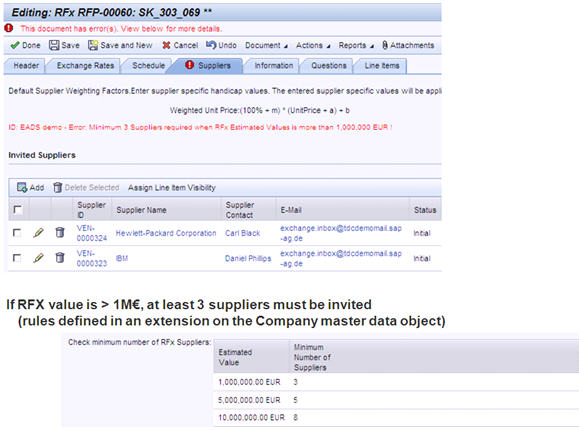 7.   Monitoring and analysis of RFx responses

An e-mail/spreadsheet-based process does not offer appropriate monitoring capabilities. With SAP Sourcing RFx, the lead buyer can monitor the response progress at any moment: 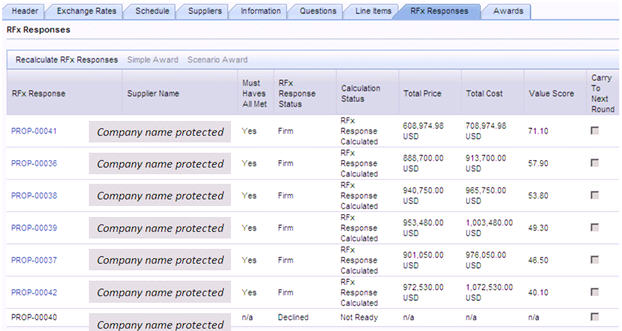 In one single screen, the lead buyer can see:

More detailed reports are a single click away, such as: 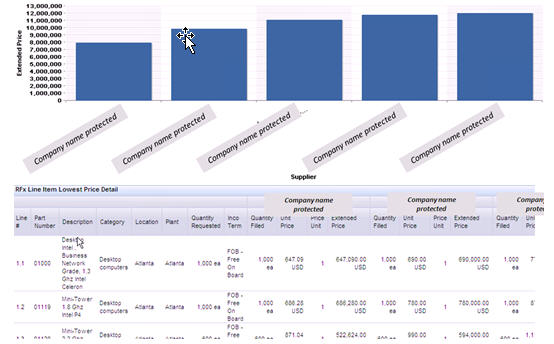 How much time would you need if you were to compile these reports manually? Also note that a manual process implies the following vicious circle: the more suppliers you invite, the higher the compilation work afterwards. This might induce buyers to limit the number of invited suppliers, which is obviously sub-optimal. An e-sourcing tool does not show this behavior: since reports are generated automatically, it does not matter whether you invite 5 or 25 suppliers.

An important step in any tendering process is the acceptance by the supplier of the buyer Terms & Conditions (T&C’s). A complicating factor is that large organizations typically maintain distinct T&C’s depending on business unit, region or even country.

e-Sourcing helps you streamlining this process by:

A well-designed RFx contains as many questions as possible that are closed questions (i.e., numbers, quantities, yes/no, multiple choices…). Yet, in many cases, there will be questions which require judgment and analysis by designated employees from specific departments (Production, Quality, Safety…). Or there might be “internal questions” which have a high impact on a bid score, such has the compliance of a sample of a given raw materials with specifications or its quality. In extreme case, the score of a particular question will need to be calculated as a (weighted) average from several scores awarded by distinct persons.

E-Sourcing tools usually include functionality to gather all this input (scores and qualitative comments) from multiple, distributed sources. At all time, the lead buyer can monitor scoring status, and issue reminders if necessary.

In the example below, a worldwide selection of an Employment Agency in a large corporation, we see how HR representatives from the three regions (EMEA, US, Asia) could visualize the supplier answers to the question “Top 3 customer references”,  then submit their scores and comments for each supplier. An average score is calculated for each supplier answer, which rolls up to their global score. 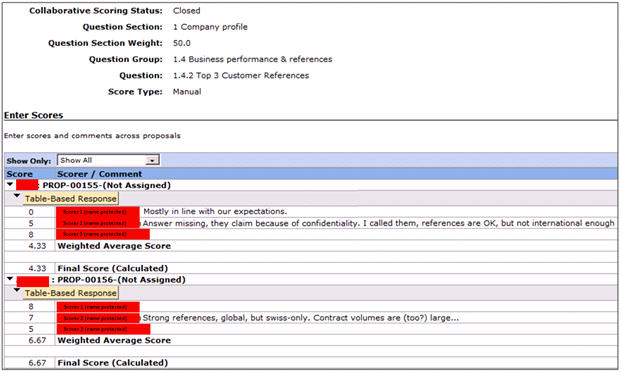 Once supplier bids are in and the unconstrained optimal solution has been determined by the system, it can be interesting to create alternative scenarios and compare them. For instance, what would be the impact on the total price and quantitative score if we choose a dual sourcing strategy (80% of line item quantities to supplier A, 20% to supplier B)? Or if we restrain the bids to suppliers who have answered “Yes” to question 123? Or if we force the system to select no more than 2 suppliers as opposed to cherry-picking?

E-Sourcing lets you develop and analyze these scenarios in minutes as opposed to hours/days, as this customer example shows: Spreadsheets can be useful, though, at one particular moment: when the lead buyer is modeling the RFx. As of Version 7, SAP Sourcing offers an Excel Download/Upload capability, which allows the user to build all or part of an RFP in a spreadsheet, in a controlled way: 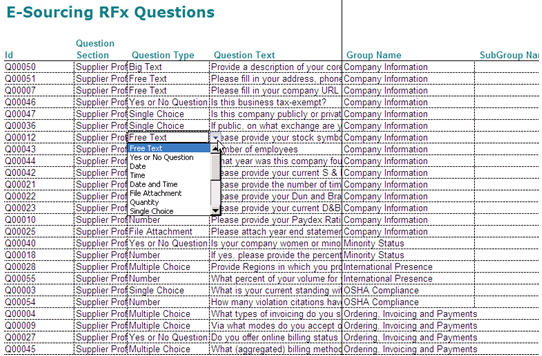 SAP Sourcing 7 offers a cool, Google-like search feature that will allow you to search across all sourcing documents (content of standard fields as well as extension, attachments, etc.).

As an example, the lead buyer remembers that a supplier once submitted a proposal for a product branded Tymor. Here we go:

What is strong with this feature is that it is ranked and thematic: it will search within your sourcing database, nothing more, and nothing less. There is much less noise than if you would use a desktop search tool on your laptop, for instance.

The benefit: locate your sourcing documents in seconds instead of minutes/hours.