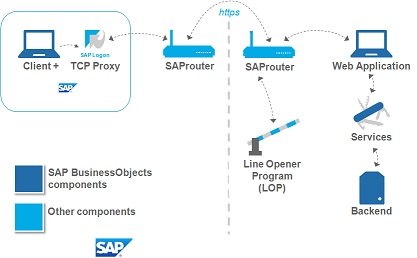 Let me first explain a bit more about SAProuter and what it is then I can get into how it will impact SAP BusinessObjects. SAProuter controls the access to your network, acting as an application gateway. As such, it is a useful enhancement to an existing firewall system (which acts as a port filter). Since particular types of connections need to penetrate the firewall, a “hole” (i.e. a port) has to be opened in the firewall. SAProuter assumes the control of this hole, providing you with the means of controlling access to your SAP BusinessObjects system.

Connections established using SAProuter do not require a connection between the SAP BusinessObjects Enterprise system and another PC on the network level. As an example, if accessing a desktop PC on a SAP BusinessObjects server with an SAProuter, it is not necessary to define the complete path between the two systems at the TCP/IP level. It is sufficient if both hosts can reach the SAProuter. From an SAP communication viewpoint, this represents a point of concentration in your network that serves as a starting point for each sub-connection. Each sub network stored logically behind a SAProuter is therefore reduced to the network address of the SAProuter.

SAP BusinessObjects is undergoing an evolution in supportability and part of this evolution adds capability for Primary Support engineers to open unattended connections to customer environments at their request. Administrators don’t need to be on the phone, at their desk, or even in the office in order to get an issue dealt with on the SAP BusinessObjects Enterprise system. In order to use this semi automatic opening, administrators need the Line Opener Program (LOP) which enables SAP to open service connections to the systems independently. Usages of semi automatic opening can be granted per system. If an SAP employee requires access to one of the systems, an opening request can be created.

Requests can only be sent to systems which administrators gave SAP explicit permission for independent opening. As an example if an administrator opened a connection to the Business Warehouse system, an SAP engineer can refresh a WebIntelligence report on their desktop at SAP against the remote database using actual data. Primary Support would no longer need to reproduce a whole plethora of environments in house, troubleshooting can now be performed on the remote environment. It is important to note that the administrator can define a time window in which the connection will be made available. Administrators can also define the connection type, for example, HTTP, remote desktop, remote debugging and RFC to name a few. The LOP checks periodically via https-requests to the SAP Service Marketplace to determine whether an opening request exists for one of your systems. If such a request exists, the LOP opens the connection between your SAProuter and SAP and the administrator gets notified by an e-mail that the network connection was opened.

Former Member
July 29, 2011 at 9:58 am
Customers have been waiting for this for a long time.  Glad to hear it is finally coming! Thanks for the post!