African Cashew Initiative Helps Small-Scale Farmers in Ghana through IT

The African Cashew Initiative (ACi) is a project aimed at helping small-scale cashew farmers in Ghana increase their productivity and income by offering training programs and materials. SAP Research is one partner in the project, which is co-funded by the Bill and Melinda Gates Foundation and the German development organization (GIZ). The SAP researchers are investigating how mobile business applications can support these farmers and their cooperative in bringing the cashew nuts to market. 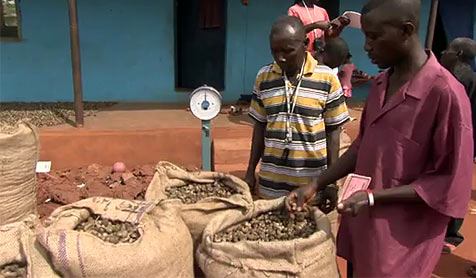 Through the introduction of smart phone applications and a geographical information system, the cashew farmer cooperatives are able to run their business in a structured, effective, and efficient way – thereby increasing the income of their members. Thanks to IT, the business processes and information flows between the informal and formal economy (including SAP customers like MIM Cashew (cashew processing), OLAM (wholesale trading), and Kraft (retail)) are sustained, and farmers get access to profitable markets.

During this year’s cashew season (March to May), about 120 tons of raw cashew nuts (a market value of US $ 100,000) have been traded via the system in five buying stations in Brong Ahafo, Ghana.

As a next step, the ACi will develop and validate a business case for SAP that takes the relevant facts into account (e.g., the raw cashew world market of US $ 2 billion, fast-growing markets (e.g., fair-trade), overlapping agricultural sectors like cocoa, shea, coffee, and cotton). In parallel, the SAP Research team has established a transfer project with SAP’s Sustainability Group that will prove the concept of a common agricultural platform (in this case, shea and cashew nut trading), addressing an entirely new customer base at the bottom of the economic pyramid.

Many thanks to Nicole Greguletz for help in authoring this blog article!