Adobe Document Services are widely used but it isn’t really a topic which pop ups much when performance analysis of a Java based SAP system takes place (as far as I have seen that is).

Navigating through help.sap.com I found some interesting information on multi-processing in the configuration documentation of Adobe Document Services.

You can check the performance of Adobe Document Service in Wily Introscope (part of diagnostics scenario for SAP Solution Manager).

I like the diagnostics scenario. One of the disadvantages the Java stack has compared to the ABAP stack is still the limited amount of information when problems arise.

I would recommend implementing diagnostics at least for your productive Java based SAP systems. It can make the difference to finding a root cause by having some information available compared to having very little information. SAPJVM 4.1 will bring some improvements compared to the current platform JDK use for SAP Netweaver 7.0x SAP systems.

The path to the performance data is <hostname> –> SAP Netweaver –> <SID>_<instance>_server<node no> –> WebServices –> Server –> AdobeDocumentServices_Config.

Wily Introscope has auto tracing on for certain servlets and one of these is the AdobeDocumentServices_Config which will show up in the trace tab (see picture 1.1).

You can see on picture 1.1 the total response time was around 6 seconds (6007 ms). Below the trace information you can find different views (see picture 1.2) which show you where time was spent.

Drilling down in the Tree view (also visible in other views) I can see that 38% of the time was spent on renderAllRemote (see picture 1.3).

The parameter poolmax defines how many parallel processes can be used for Adobe Document Services. You can find the parameter value in the parameter properties of the XML Form Module service in the Visual Administration.

The default value is four, meaning four processes can be used for the XML Form Module service. The recommended value is the number of processors used by your application.

How do you change the value?

You can change the value in the parameter properties of the XML Form Module in the Visual Administrator. If you want to apply the change to each Java server node you have running (in case you have more than one server node) it is best you use the global configuration tab (see picture 1.4) instead of the cluster tab.

After clicking update you still have to hit the save button on top of the right pane to apply the change. In order to use the value of the updated parameter, the visual administrator will request to restart the service (this will make your PDF printing unavailable for 10 seconds give or take). Once the service has been restarted, the service runs with the new parameter value.

The best option to test changes in the parameter settings is to have an actual business case where Adobe Document Services is used. That way you can generate load which is as close to the business use as possible.

An alternative if you don’t have a business case or you want to perform some test using simple PDF form printing, you can use ABAP report FP_TEST_00. 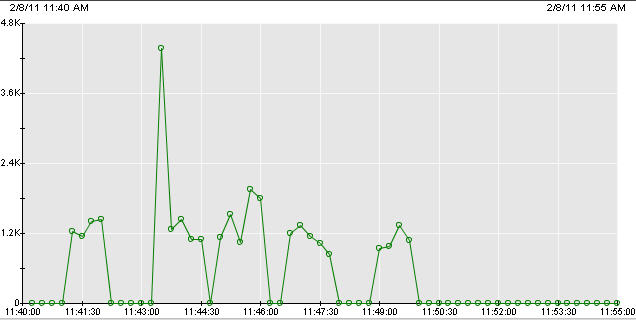 The first use of the service after a restart took place is very slow. This is normal so don’t panic if your response times are very bad when you perform the first test. You can see in picture 1.7 that between 11:43 and 11:44 the first run took place after the service was restarted.

The results after changing the parameter poolmax to a higher or even lower value is influenced by the amount of data that needs to be processed. If you have a server with multiple SAP instances and four processors, it might make sense not to set poolmax to a value of four.

If you have multiple SAP systems on that server, those SAP systems will also use resources and utilize processes to do so. You could end up with worse response times for Adobe Document Services as an effect.

If you only use ADS for PDF printing and you don’t really have any heavy use of ADS you will not gain much performance (if you gain performance at all) by increasing the poolmax setting.

The parameter is interesting when the ADS is used a lot and the data to be processed is large enough. Sad enough I don’t have a proper business case with heavy use of ADS to show more data or give proper results. I could only set load on the server using the FP_TEST_00 with multiple pages.

Thanks for this insight into ADS performance. I would just like to add that I think CA Wily gives great insight into exactly what is going on in the JAVA stack which is otherwise a bit of a black box. I have used it successfully many times to diagnose issues and bottlenecks for our customers. I tend to find most customers have it configured but fail to really use it or know what to look for when they use it. It requires a certain knowledge of how Java hangs together and the application being monitored to get the most out of it.

Out of the diagnostics scenario Wily Introscope bring the most value for me so I can definitely agree with you on that point.

The way I see it there is a serious lack of Java knowledge and skills necessary to properly support AS Java. It's also one of those things that I get called up for, visit a customer for a day to check their AS Java or give a training on Root Cause Analysis.

Nothing holding me and other community members back to exchange knowledge on the topic though and help each other learn how to efficiently manage AS Java. I'm always up for information exchange/collaboration.

I can only say I totally agree with your comment.

It's highly recommended to install CA Wily to monitor/interpret what goes on with AS Java based SAP systems.

Understanding how Java technology works (garbage collection etc) is important to provide proper support for AS Java based SAP systems.

I hope in the future we will see more knowledge sharing around Wily Introscope so we can all learn from it.

You highlight a very important point related to the use of Java applications such as Adobe Document Services.  Parameters that determine the number of available threads can easily restrict a Java application from using all the available hardware resources and performing to its full potential.

I have used Wily Introscope for similar investigations for Process Integration and Portal, where the default parameters caused significant bottlenecks as the load was increased.  It's a great tool not only for online monitoring, but also for investigating the cause of issues that once they have occurred.

Things like ADS performance and parameter settings are often overlooked when a SAP system is being reviewed or a service is performed on it.

It is indeed important to challenge what is supposed to be default. After all, who sais there is no better value that suits the specific use case.

The amount of application threads is a nice metric to test performance on through Wily Introscope. I have seen it scale with reponse times so it is definitely worth doing some tests on.