To start, a little flow chart diagraming the SDK upgrade options through the ages: 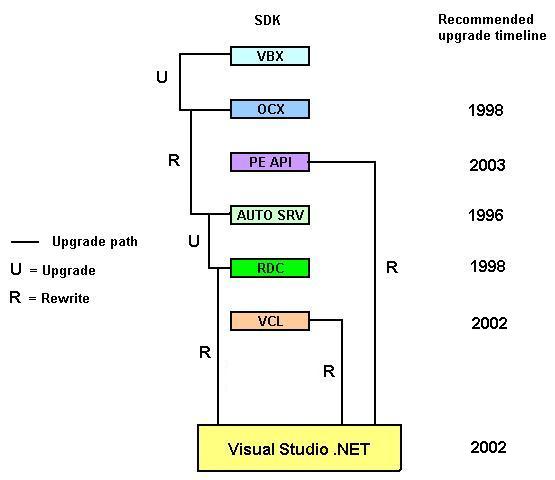 VBX was the very first SDK released for Crystal Reports. A cool technology for the day (1993) and VB 2. The VBX was replaced by the OCX (in some circles referred to as ActiveX). If you are still with an application that uses the VBX, I have nothing but condolences for you. You must still be on WIN 3.1. (Did the VBX work on XP? I don’t remember.) In any case, only one option for you; delete and move on to current technologies; .NET or Java.

Pretty well everything said for the VBX applies to the OCX. Though at one time or another I actually found a blog on how to work with the Crystal Reports OCX in VS .NET 2003. Do I dare link to it here… well, just for the fun of it, here is the link; Using Crystal Reports OCX Control in VB.NET 2003 (). But promise you will never, ever even think of posting any questions on this in the SAP Crystal Reports, version for Visual Studio (link to the forum only given for reference purposes). The OCX came in 16 and 32 bit flavors and was the first 32 bit SDK shipped for Crystal Reports. Moving on, .NET or Java should be your options.

Compiled Reports were not really an SDK, but they were such a great technology I’d be remiss not to mention it here. In a nut shell, versions of Crystal Reports (v. 4 (?) to version 8.5) allowed you to compile a report into an executable file and distribute the file to any computer. Imagine! An application exe without the development work! You could filter data, log on to a database, print, export, view… Oh, the good old days. No successor as such to this technology – other than the Crystal Reports viewer.

The Automation Server SDK was the Report Designer Component’s precursor. When it released, I always had a feeling that it was really an experiment to see if this “new” COM technology would work. And it did – very well actually. The Server, having a lifetime of only two versions, was quickly replaced by the Report Designer Component  (RDC). Once again, as far as upgrade, same story as for the above SDKs applies; .NET or Java.

Report Designer Component was the successor of the Automation Server – A better, faster more robust SDK that for the first time included Report Creation APIs as well as the Embeddable Designer (first for OEM partners only, later on for anyone who wished to add the necessary licensing). The RDC is present in Crystal Reports from version 6 to version 11.5 spanning 8 versions of Crystal Reports. The most long lived Crystal Reports SDK, unless you include the VCL but I don’t due to the issues described under the “VCL for Delphi” heading below. By CR 8.5, with the Internet becoming main stream, you could even build the first reporting web applications using the RDC. Crystal Reports XI R2 is the last version of Crystal Reports to include the RDC… Now, a word of defense here. Don’t say you were not warned about the RDC going away;

The Statement of Direction regarding the future of the RDC was published in 02 March 2006
On October 20, 2008, I wrote and published the blog Report Designer Component – Past, Present & Future
What’s New in Crystal Reports 2008 also discusses the termination of the RDC in CR 2008 (12.x)

More bad news; CR XI R2 is no longer supported – not since June 30, 2011. Thus, there will be no new updates or fixes released. You can not obtain phone support either. You can however post your queries to the Legacy SDKs – SAP Crystal Reports forum (SAP Crystal Reports – Legacy SDKs). Do not forget to use the search box in the top right corner of this web page – preferably before you post to the forum. The search will deliver KBases, Articles, wikis, blogs, sample apps and more. If you are upgrading from a version of Crystal Reports earlier than version 9, look at the following “must see” resources:

CR XI R2 can still be downloaded as trial version as well as an upgrade from the FREE TRIALS website. Also see the blog Where did all the Where did all the Crystal Reports XI R1 and R2 fixes go? as you want to ensure that you are using the latest Service Packs – always a great idea. Now the big question; What are your options if you want to move beyond Crystal Reports XI R2? Same as for all of the other above SDKs and technologies; VS .NET or Java. No ifs, no buts. It is your only option.

The original VCL was actually developed by a contractor in version 4, or 4.5 of Crystal Reports. Unfortunately, during one of the many take overs and other changes, the source code was lost. So  Frank Zimmerman ( a genius in his own right) who worked in CR technical support at the time, decided to rewrite the VCL from scratch. The technology is based on (wraps) the Print Engine APIs.
As a point of interest, the VCL was always purely a tech support technology and R&D never added a single line to it (not as far as I know anyhow). When you downloaded the VCL, you also got a “sample” application as well as all the source code (guess you can’t lose the source code if everyone has it…). The application was really a show case for the VCL. It was so good that many of us in tech support used it as a utility in every day troubleshooting of the OCX, the Print Engine APIs and even the early .NET SDK.

The news for VCL app upgrades is not as bleak as for the VBX, OCX, PE APIs or the RDC. The article Updating the Visual Component Library in Crystal Reports XI explains how to update the VCL so it will work with virtually any version of Crystal Reports. A word of caution here though. Remember I mentioned that R&D never touched the VCL? And that the Print Engine SDK was last seen in CR 9? The upshot of that is that features introduced in Crystal Reports after version 9 will not work with the VCL. An example would be dynamic and cascading parameters. And the further away from CR 9 you go, the more such issues you are bound to run into. You also have to be concerned with runtime deployment. After CR 8.5, it is pretty well impossible to deploy any CR runtime without using the appropriate MSM or MSI file(s). And since as far as R&D is concerned the VCL does not exist, there are no MSM or MSI files for the VCL. And tech support is not about to build these either. Solution? Use the appropriate version RDC MSM (see the wiki Crystal Reports Report Designer Component Runtime Distribution – Versions pre 8.0.x to 12.0) AND add the file CRPE32.DLL to your deployment project, ensuring the dll is installed into the appropriate Crystal Reports bin directory (e.g.; same directory as where all the other CR files are installed). OK, so that will take you to version 11.5 of Crystal Reports (CR XI R2). Since the RDC is not available after CR XI R2 there are no RDC MSM files either… One option; use the MSM files for .NET. Issue; you will have to ensure that the .NET framework is installed before trying to install the CR runtime. Probably not too much of an issue with any modern Operating Systems, but good to know.

Given the declining state of the VCL with each subsequent version of Crystal Reports, what is your option if you are using Delphi? Port the application to Delphi .NET. Trevor Dubinsky has written a series of blogs on Crystal Reports, Delphi and .NET. See the following:

SAP BusinessObjects BI Legacy Products
This forum is dedicated to all other development-related questions which are not directly addressed by other forums. This includes Business Objects SDKs, products, or technologies which do not fall under BusinessObjects Enterprise, BusinessObjects Edge, Crystal Reports Server, or Crystal Reports (for example Desktop Intelligence SDK, Universe Designer SDK, Portal Integration Kits, Java User Function Libraries, and other third party technologies or development languages).

If you are interested in phone support, see the On Line Store.