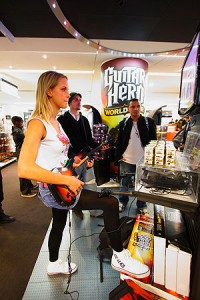 It was Ben Franklin who once said “in the world nothing can be said to be certain except death and taxes.” If Ben were alive today, I wonder if he’d modify his now-legendary quote to include gamification. I’ve delved into the topic before, but two recent developments have really piqued my interest and make it abundantly clear that gamification is not only here to stay, it might just end up saving the (real) world.

First up is an informative blog from Alexis Tsois at TechCrunch ( Bing Gordon: Every Startup CEO Should Understand Gamification). Bing Gordon is a former exec from Electronic Arts who made some very eye-opening remarks at a recent gamification summit. He said that gaming is the “new normal” because everyone who once had a Nintendo at 16 has a brain that’s more receptive to game elements. Here’s more from the TechCrunch piece:

Gamification is as important as social and mobile Gordon told me, which makes sense, as elements like rewarding people for behavior are pure human psychology. His talk was separated into a three-pronged approach, Acquire, Engage and Retain, “All your experiences are three part experiences,” he said.

In terms of user engagement, Gordon advised CEOs that first impressions matter, “Your job is to create a “Wow” within the first session … The value of gamification is the mechanics second and the mind of gamers first.”

It’s also a big deal that SAP remains steadfast with its commitment to gamification.  SAP just scored Jane McGonigal, Director of Game Research and Development, Institute for the Future as a keynote presenter at a SAP TechEd event in Las Vegas.  Why is this a big deal? Jane is a world-renowned creator of alternate-universe cyber games and is the New York Times best-selling author of Reality Is Broken. And she thinks we ALL need to be spending much more time playing and developing games in order to help solve some of the world’s most pressing issues. How much time? Check out the above video. It’s a pretty big number.

Do you think gamification is a sure thing? Can it help save the world?

So I thought what a perfect lead in to Innojam. From the web page here's a description:
"The theme of this year's SAP InnoJam is Gamification for Enterprises which will bring in new and exciting aspects to developing with SAP software."

Hope to see you there!  (It should be an amazing event.)