Last BPath lesson was presented some time ago. The performance investigations took slightly more time then expected, mainly due to other work. But let us concentrate on Bpath and the current lesson.

BPath. Lesson 05. Sub, String & Get-function(s) plus global variables brought us a view over quite a lot of functions. This time we have only limited content in respect to new functionality but a bigger chapter in respect to performance.

To allow easy access to the data we introduced the possibility to work on unstructured return types, such as integer values and strings. The rule is simple, if the declared return type is not structured; every write access to it is treated as writing to the value itself (irrespective of the target name used). Read access is not supported (use global vars instead).

The following example returns the index of the first passenger beginning with “S”.

Another useful feature is the possibility to sort the result table according to your needs. The feature includes the sorting of sub query result tables. Sorting is treated as feature of the structure definition. This means, in case you want to sort the result the structure has to be stated explicitly. Dynamic structure definitions as ~* are allowed. The sorting field names are added encapsulated by [ … ], the sort-order (‘A’ or ‘D’) might be added as option triggered with a colon (default is ascending order). ‘T’ option can be used to sort data as text. The star operator is used to indicate the current order, this means, if a star is part of the sort order definition, stable sorting is done.

The inner sort order is just for display purposes – the sub query returns anyway only one entry in the table (as every flight has only one connection).

The sorting is done at the very end of the evaluation. The sorting used for filtering, assignments, etc remains as defined by the underlying relations.

Up to version 2.1 (a BPath version not released to customers) any filter condition which returned a numeric value (e.g. n= 2 or n=-1) was implicitly evaluated with a check against the current index (means [ i =index()]). This is theoretically fine, but results in a very poor performance in case the numerical value does not depend on the attribute values.

With the released version any filter returning a numeric value is directly indexed, in case it fulfills certain conditions. Directly indexed means that only the requested entity is evaluated, all other datasets are ignored and not further processed.

The result of any query should not change, but the performance should be significantly better in case direct indexing can be used within large collections.

Please note that a negative indexing refers to entities counted from the end of the list, -1 is the last object in the collection. The syntax does not allow to use negative literals directly, [-1] has to be specified as [0-1].

A rather crude example:

Unfortunately it is not easy to discuss performance seriously, because of the following reasons:

The following simple evaluations were done in one of our systems, the goal of the investigations was to have an idea which performance you might expect and which guidelines may be considered. The machine where I did the tests was running in a solaris zone (virtual machine) with 2.6 GHz and 10Gb of RAM. It is a non-Unicode system.

See below the table of results. The first column contains the BPath query, which was always executed against a collection of 10 “flights”. The “result” column contains the number of datasets returned, whereas the “touched” column also contains all entities which were touched during execution. The “Frst” column holds a checkbox whether we measure the complete execution (“X”) or whether we measure without the startup time (means we reuse the parser). Only the first example is measured with startup performance, but it is anyway only about 3 ms.

The next column holds the needed time for the execution in microseconds, followed by the time required by the parser plus the stack.

The second last column contains the percentage of time elapsed in BPath compared to the time elapsed in the lower layers (GenIL, application specific coding as relation loading) whereas the last column simply holds time in BPath divided by number of touched entities. In other words the time required for BPath to evaluate an object lying on the execution path. 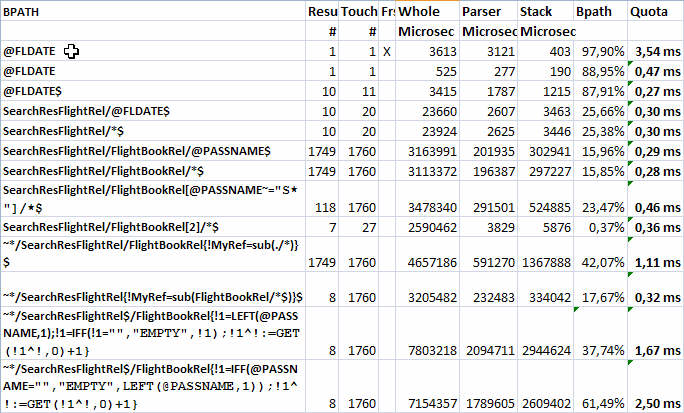 Well, all these evaluations are done against “Flights”, which are kind of artificial demo object structure. It is difficult to judge, how it looks when we work on real life objects.

So I did some more tests in another system, which contains better data. System characteristica are comparable.

My demo program reads a list of contacts with the BuilContactAdvancedSearch query where with telephone covers ‘0*’ and country is ‘DE’ to avoid working on irregular data. Then my BPath query simply tries to collect all addresses with the following query:

The query returns 33 entries, exactly one address per contact.

An execution of the BPath requires 683 ms against uncached data with 25.5 ms in our BPath code itself. This makes it to 0.38 ms per touched entity (we have 2*33  = 66 entities) within our BPath classes.

On cached data the whole execution time shrinks down to 32 ms, still with 25.5 ms in our BPath code. This means in this case Bpath directly causes for about 80% of the required time.

So, in the end this example fits to the results from the table above and I hope you now have an idea about the performance you can expect from a BPath query.

That’s it for today. Lesson 7 will cover the model check mode and parser reuse plus some small language topics as attributed parent relations and attribute longtext.

I really appreciate the blog series you started and have read all articles about BPath you published so far.

Now I found that BPath is a really lean way to get access to attributes of underlying relations in the GET_* methods of SAP WebClient. However I was wondering if it is not only lean by the lines of code, but as well in its execution times.
In this blog you gave some numbers and I was wondering how they compare to the "traditional" way to access attributes in BOL entities.

As you see BPath will be considerably smaller and in my opinion a lot easier to understand. But what about performance when this method is rapidly executed?

it is really difficult to provide a general answer in respect to performance questions. In a sense BPath can be an optimization in respect to maintainability, but when it comes tough performance requirements, straight ABAP coding will return faster.

As all steps which you mentioned in your ABAP code are basically also executed internally with the BPath execution, the BPath way is of course slower. The question is how much. Typically the fetching of the related entities requires much time (in case it is not yet cached) so the BPath related execution times fall not so much in the picture.

In general I would recommend to view it the other way round. Simply use BPath to code your requirements. Check the performance in real life and against the numbers from my blog. If performance (and other parameters) is sufficient, you may leave the code as it is, otherwise use the BPath statement as template / high level design for the real ABAP coding.

thanks for your opinion!

> As all steps which you mentioned in your ABAP code are basically also executed internally with the BPath execution,...

This was the part where I was unsure. I thought maybe BPath hat a different way to access the BOL layer. Hoped for some "FRIEND" relation ship.

> otherwise use the BPath statement as template / high level design for the real ABAP coding.

This is an interesting suggestion. Is it possible to generate the corresponding ABAP code for a BPath statement already? I am quite sure the BPath interpreter has coding like this in it. At least it ought to when it is working on the BOL layer.
Maybe this is a great idea for a new Wizard in the WebClient (hint) 🙂

as for the first part. There were some hopes to make it even faster with BPath since the complete task is known and not only a fragment. Frankly speaking I never really shared these hopes. There were some attempts to introduce something for more complex statements, but they were never completed. As for easy statements as the one above there is practically no way to achieve substantically better performance by internal ways, as long as I know.

As for the second question I have to disappoint you a bit. A compiler (to ABAP) is actually a completely different thing (e.g. for the implicite loops, the structure generations) and would require quite a lot of effort. I also thought in the beginning that at least for the main parts (relations, filters, ..) a compiler would be a funny thing, but after a while it turned out, that the effort is too high.

What about error handling in Bpath?

just by your reply I realized, that I never described the model check mode possibilities here, so maybe I do briefly describe it here in this comment.

In general BPath should be designed in a way that a syntactical correct statement has a defined output and never runs into errors. I hope that I have not overseen any possibility in one of the features where this is not valid.

But of course not all statements are syntactically correct, then an ABAP exception is raised:

As you may have noticed I refered to a Model Check mode along these tables. I am afraid that I never have described this mode, but in fact it is pretty useful on designing BPath statements as it not only checks the syntactical correctness, but also:

There are some specialities where the result data structure can not be fully determined at design time, i.e.

Syntax of model check is:

To use the syntax check or model check the exceptions caused by snytax errors have to be caught. For an explanation of all possible exceptions see above.

Well, I guess this is more of another blog, I will write it down into a new blog. I guess there are still some things left worth to be published, so they may follow.

Thanks for such a detailed explanation. I would be looking forward for your next blog.

However I am facing an issue regarding the exceptions for which I will start a new thread.

Thanks for a fantastic blog on BPath.

I can't get the sorting to work. I am trying with marketing permissions on a customer and sort them by CHANNEL and VALID_FROM descending, but no sorting happens. It just returns the list like if I do no sorting...?
Can you give a hint?