At the risk of sound redundant, we want to continue to underscore the value of SMS as a communications medium in trying times.  Apparently, according to news reports, a man was rescued after he texted his friend: “I’m alive.”

As with many world and regional events during this year and previous years, the devastating tornado that struck Joplin, Missouri on Sunday the 22nd of May, 2011, resulted in a surge of attempted communications as friends and families react and attempt to contact loved ones.  In such regional or localized situations, it is well known that many communications facilities would be overwhelmed or rendered unusable.   But, given the highly redundant architecture of today’s mobile networks, one would expect that many tower locations would be spared and potentially continue to operate.  Additionally, from a more regional sense, the wider region should continue to support increased communications traffic, immediately after the event.

After the Joplin, Missouri tornado, we were able to compare the SMS traffic, originating from area code 417, immediately before and after the event with the previous two days.   As expected, in the minutes leading up to the tornado hitting at approximately 5:40PM CDT, the SMS traffic was within “normal” amounts for that time of day.  By 6:00PM, traffic was up 30% and by 7:40PM, as word spread, SMS traffic peaked over 106% of normal and remained high throughout our evaluation period.  In our sample, all US Tier 1 operators were represented, as were several NUVO and Tier 2 operators that utilize 417 area codes. 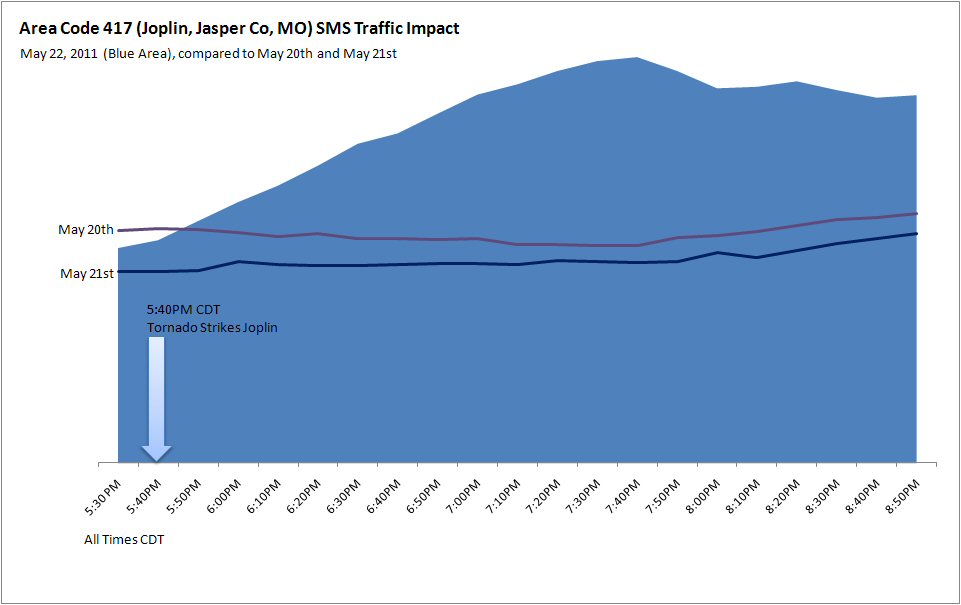 While we didn’t drill down to specific Joplin area (NPA-NXX), the area wide traffic still surged dramatically, underscoring the viability of SMS as an urgent and reliable communications channel.   There were other storms in the area.  Springfield, Missouri, the largest population center in area code 417 was also struck by severe weather, as were other communities.

The main Joplin tornado warning was issued at 5:17PM, after a separate warning for “NE Joplin” on a different storm at 5:09PM.  We did not note any unusual increase in Person to Person messaging, leading up to the tornado starting to hit Joplin and immediate areas.

Although extremely tragic, unlike other events, we have noted, this is an event with a very localized impact.  Outside of area 417 and a few adjacent area codes – especially in Okahoma  — overall messaging was not statistically impacted.  Still as our graphics show, the localized SMS traffic effectively doubled after that – whereas voice – both fixed and mobile may have been disrupted, due to communications infrastructure damage.   SMS can work with lower signals, when a mobile voice call may not be possible.

Finally, don’t forget that you can always text REDCROSS to 90999 to donate $10 to help the Red Cross support relief for recent tornado victims across the country as well as the recent flooding victims.