Setting-up an Environment for Ad Hoc Query – the configuration

Last week a colleague, who was exploring the Ad Hoc Query transaction, sought some help in configuring the query from end-to-end. I explained him the steps needed to build the Query environment for end-users. He was happy to do it by himself and to see his confidence in configuring the query elements I just thought why not to share our work with a wider community as there could be someone looking for the similar thing. Thus, I illustrated the basic steps to setup a query environment and here’s the copy for your review & comments.

I hope the beginners, who are my target audience, would be able to ‘configure’ the query following the steps stated in this small piece of writing. Though the topic is intended for beginners, suggestions / comments from gurus on SCN would, of course, also be appreciated.

Our approach of configuring the query

While setting-up the query, we followed a very simple approach which was to configure the minimum but to cover end-to-end process. So we 1) configured the InfoSet with only 2 Infotypes, 2) created a user group and 3) assigned a single user & the InfoSet to the User Group. When I told my colleague that the basic environment was ready to run the Ad Hoc Query transaction, he couldn’t believe the activity to be that simple. Anyways he followed the steps and I could see a good query there!

I think it’s time for you to ‘believe’ on what I was saying. So let’s start! Look at the summary below to have an idea of what we’re going to do! 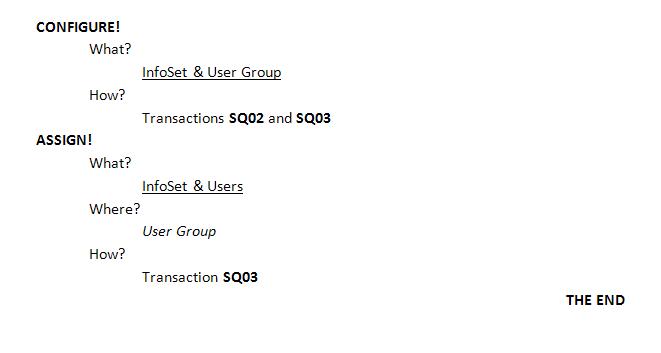 You’re done with the technical part. Now your end-user can create queries and save the templates for future use. You may refer your users the following steps.

Surely we can do a lot more to fine-tune the technical part as well as the end-user side. However, the blog serves the different purpose; it just outlines the steps. If you think these should be explained further with screenshots, please suggest and I’ll try to expand the topic further in my next blog.