Since this is a performance blog, I recommend that you use all these different techniques only if you really need them. Many checks that are executed at compile time for static code have to be postponed until runtime and are then executed repeatedly for every execution when you use dynamic programming. As a result, the performance of dynamic program sections is always poorer than that of static ones.

Today I want to discuss a memory problem that can occur if ABAP Runtime Type Creation (RTTC) is used extensively. Sometimes you need to provide code that is capable of working with internal tables that have a line structure which is not known at design time. In such a case it is convenient to create the internal tables dynamically at runtime.

In the following code snippet, I first create a simple structure type my_struct dynamically, and then from this structure type, a table type my_table. This is done using the CREATE methods of ABAP Runtime Type Services (RTTS) classes CL_ABAP_STRUCTDESCR and CL_ABAP_TABLEDESCR. At the end, an internal table is created with the CREATE DATA statement:

Now, in a real program, such generic code might be executed many times, and one often observes that the identical structure type or table type is created over and over again.

To simulate this, I put the table type creation into a DO … ENDDO loop, see code below.

When the program reaches the BREAK-POINT statement, I get into the debugger and open the memory analysis tool. In my first compilation of screen shots you find that ≈ 969 kB of ‘ABAP Application’ memory is allocated by ‘Dyn. Memory Objects’, most of it (≈ 963 kB) by the internal table ADMIN_TAB of RTTS class CL_ABAP_TYPEDESCR. During the execution of my little program this table grows up to 10,003 entries. What is even more important: the overall allocated memory (line ‘Allocated’ in area ‘Total’ below) is around 12 MB! 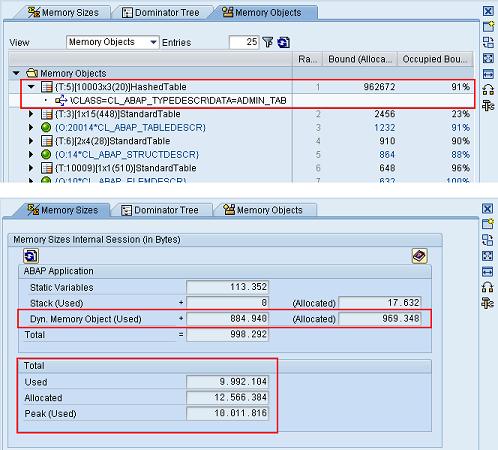 What happened? While I repeatedly created table types with an identical line structure, always a new entry was entered into the ADMIN_TAB table of the class CL_ABAP_TABLEDESCR. But where does the high amount of ‘Total’ memory come from? This memory is allocated by the ABAP kernel and most of it corresponds to memory objects that represent the numerous table types I created in my ABAP program. The kernel memory is not under control of the ABAP garbage collector, and often is only released at the end of the user session.

You can easily imagine, that when a program is making massive use of dynamic type generation, the memory allocated by the internal table ADMIN_TAB and the associated kernel objects can become very large. In fact, at one SAP customer, the ABAP extended memory was blown up to its limits – with the result of short dumps due to memory overflow.

I repeated the execution of my program above, but this time the following statement was inside the DO … ENDDO loop:

See the effect on the memory allocation in the second compilation of screen shots below: 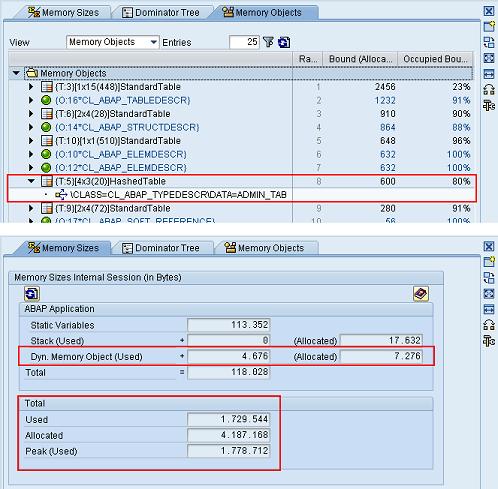 As you see, the memory allocated for ‘Dyn. Memory Objects’ is only ≈ 7 kB, and the size of the internal table \CLASS=CL_ABAP_TYPEDESCR\DATA=ADMIN_TAB is down to ≈ 600 Bytes for 4 entries. The ‘Total Allocated’ memory is now only 4 MB – which is the default size for an initial user session. The ‘Used’ memory has reduced from nearly 10 MB to 1.7 MB.

If you call the GET method repeatedly with identical parameters, it is guaranteed that the returned type objects are at least ‘move compatible’ with each other – that is, a MOVE between data objects created from these type objects will always be possible (this is the kind of compatibility that can also be checked with method APPLIES_TO_DATA of the RTTS classes). A higher degree of compatibility is neither guaranteed by the SAP NetWeaver layer, nor needed by a normal consumer.

So my recommendation for you is: if you really need to create a lot of type objects (structure types, table types, or reference types), and there is a high probability of identical type objects, use the appropriate GET method of the RTTC class instead of CREATE.

Sandra Rossi
March 27, 2011 at 1:45 am
Thank you Randolf for bringing that fact to our attention! I would prefer to always use GET in case the code is used inside a loop. Do you know what is the time difference between a unique GET and a unique CREATE? (and does it depend on the number of types in memory, or not)
Sandra

we compared the runtime for the first GET in a loop with that of the first CREATE and found that the CREATE was 5-10% faster. But this is on a very low level of some 100 µs for the whole method call. We did not check this for a varying number of types in the memory, but this should also play no role, since it's always a hash table access.
So even if a loop is only executed once, using the GET method instead of CREATE would be of no harm. If the same type object is retrieved a second time, the GET is about 30-40% faster.

thanks for this blog. It's always good to know such 'secrets'.

Is there a way to release the memory allocated by the ABAP kernel, programatically?

No, I don't think so. And even if there would be some way, it surely would be one of the best kept secrets of ABAP kernel developers.

This blog is amazing .It really saved us .Thanks a  lot for sharing this.Looking fwd for more such useful blogs from you .

Thank you, this is really amazing.