In the old R/3 days, ABAP programmers rarely needed to analyze memory consumption in their programs.  The simple and robust ABAP memory model made it very hard for anyone to program a serious ABAP memory leak.

With the addition of more types of dynamic memory objects – not just internal tables, but also strings, anonymous data objects, boxed components – and a trend toward transactions that live longer, it’s now possible to write an ABAP program that can run into memory problems.

Since ABAP programmers can no longer ignore memory consumption, the ABAP Workbench has greatly enhanced the memory analysis tools in the New ABAP Debugger and in the Memory Inspector (transaction SMI or S_MEMORY_INSPECTOR).

This weblog showcases the enhancements that come with EHP2:

You may also notice that doing memory analysis in the debugger is much more comfortable, and that we have made improvements in the user interface in the Memory Inspector as well. But we do not go into these UI changes in detail, nor will we look at the Memory Inspector transaction in this blog.

The New Features in Practice in the Debugger

You do memory analysis usually for one of two purposes:

Let’s see how the new memory analysis features work if you are in the debugger, just checking how much memory your program uses. Maybe you’re just being cautious in doing this checking – or maybe you’ve learned:  a long-running transaction or service with lots of dynamic memory objects means, you better check the memory consumption before your customers find out about it for you.  What you see here on the new memory analysis features applies just as well in the separate Memory Inspector transaction.

Here we have two tables that have the same number of rows, and we happen to know that they contain the same data – except that IT_CUSTOMERS contains extra data.  Even so, IT_CUSTOMERS is smaller in memory.  How is the difference explained?   Does IT_CUSTOMERS offer a more efficient way to organize the table?  A closer look shows that we don’t understand how IT_CUSTOMERS is organized. The table statistics don’t seem to match the memory size.

The tool that was available before EHP2 was the Memory Objects view, shown below in its form in NetWeaver 7.0 EHP2. This tool shows you the memory objects of the program (the representations of dynamic variables in the memory management system) ranked by size.

Memory Objects also shows you which variables reference each memory object.  But the view does not help us to understand the differences between the IT_CUSTOMERS and IT_SCUSTOM tables. Essentially we just have an unstructured list of memory objects ranked by size. 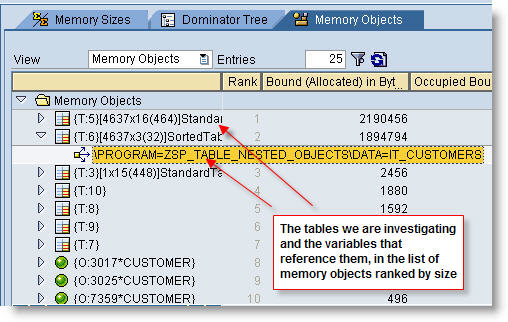 Here’s where the new Dominator Tree view (below) shows how useful it is.  In this view, it’s immediately clear how IT_CUSTOMERS is structured. The rows are so short because they contain only an object reference. The CUSTOMER objects in the table contain, by the way, a further object, ACCOUNT.  The CUSTOMER objects are also keeping several strings – variables NAME, ADDRESS, and CITY – alive.  The bound storage of the table is so high because the table is keeping all of the customer object hierarchies alive.  (Without the references from IT_CUSTOMER, the ABAP garbage collector would clear the objects away and free the memory.) 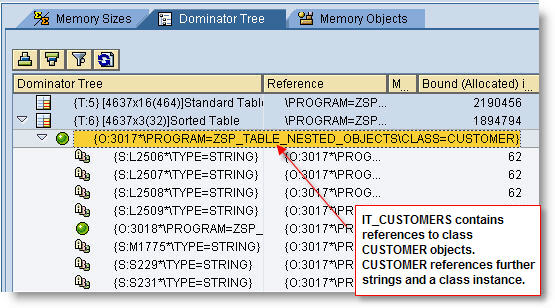 The organization of the table is now clear. Where does the advantage in memory use of the IT_CUSTOMERS table come from, compared to table IT_SCUSTOM?

The Dominator Tree shows only strings and instances of classes that belong to the bound storage of each CUSTOMER class object. These are the objects that CUSTOMER keeps alive. The Memory Object Explorer, by contrast, also shows objects that are referenced by more than one CUSTOMER instance, memory objects that are in effect shared. Can it be that sharing of objects accounts for the reduced storage use?

We follow a CUSTOMER object to its referenced objects and then check some of the referenced objects themselves in the Explorer. COUNTRY looks like a good variable to check for sharing among multiple CUSTOMER objects. So we go from string {S:S9} ADDRESS-COUNTRY up the memory hierarchy – Higher-Level Memory Objects – to see the parents of this string, objects that reference this string.

And in fact, as you can see below, the more efficient storage use in table IT_CUSTOMERS than in IT_SCUSTOM could be due to massive sharing of string objects in memory.  There are many CUSTOMER objects from our table that reference the same COUNTRY string. 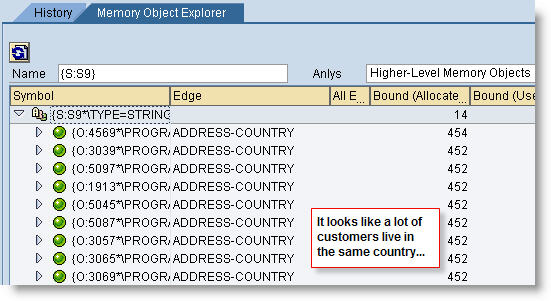 The IT_CUSTOMERS table design takes advantage of the fact that string variables that have the same content share a single memory object.  (See ‘value semantic’ in the ABAP Online Help (transaction ABAPHELP or at help.sap.com).  ABAP gives a string or other value-semantic object its own memory object only on an as-needed basis – if the string is changed.

In many applications, a table like this list of customers is rarely changed, but is used instead to guide processing. In this case, it may make sense to make use of memory object sharing to reduce storage consumption.  In this application, CUSTOMER attributes like the country-of-residence reference the same string, as long as the same country is being referenced.  You can check out whether the strategy is really worthwhile – when filling a table, when reading a table, in the event that object attributes are changed – by doing some testing of the alternatives in the ABAP Runtime Analysis, transaction SAT. (See the weblogs by Olga Dolinskaja on the new SAT.)

An advantage of doing memory analysis in the debugger is that you can see what the value of the variables is. This is something that you cannot do when you analyze memory snapshots in the Memory Inspector (transaction SMI).  A double click on string {S:S9} above shows us what country all of those customers inhabit: 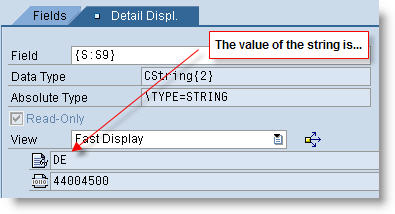 But the Memory Inspector, in turn, has the advantage of being able to compare memory snapshots and show changes in memory use over time. That’s an invaluable capability for checking for leaks in a long-running ABAP application.