The Single Transaction Analysis was extended recently and has some great new features. This blog shows you what you can expect from the latest version.

ST12 is delivered as a part of the Service tools for Applications (ST-A/PI). SAP note 69455 describes how to get the latest version of the ST-A/PI. Watch out for the 01N_* version which is RTC (released to customer) since 21st of March.

Please note that the ST12 transaction is not officially documented / supported and only available in English language. Although it is mainly intended for use by SAP or certified Service consultants during SAP Service Sessions, you can use it for you own performance analysis. A brief description of ST12 is given in SAP note 755977 (ST12 “ABAP Trace for SAP EarlyWatch/GoingLive”). A few blogs on ST12 can be found in the ST12 WIKI in SDN: http://wiki.sdn.sap.com/wiki/display/ABAP/Single+Transaction+Analysis

Let’s have a look at the new elements on the main screen of ST12 in figure 1. 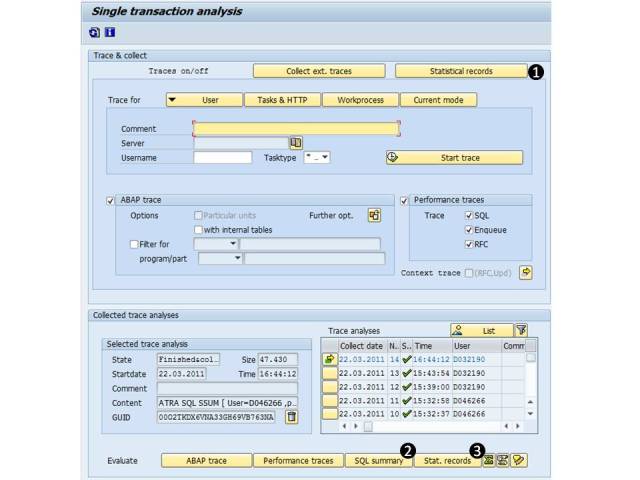 The button “SQL summary” (nr. 3 in figure 1) will forward you to the SQL trace summary which has been collected and imported automatically by ST12. The SQL summary (figure 3) is as well stored together with the trace in the database. This data is independent from ST05 after import. That is you can do an explain plan (nr. 9 in figure 3) for a statement within ST12 without leaving to ST05 and without having the data of ST05 available. Furthermore some additional data (nr. 8 in figure 3) like”% of the time of ABAP trace time” for the SQL statement or additional statistics (e.g. min, avg, max execution time) per calling position is available in the SQL summary.

With the button “Statistical Records” (nr. 1 in figure 1) in the top of the screen you can manually collect data from an existing STAD record and store it together with the trace analysis to the DB. This button brings you to a pre filtered list of possibly matching STAD records where you can choose the right one. All important KPIs of the STAD record chosen will be imported and stored together with the trace in the database. Up to now the import has to be triggered manually; future versions may offer an automated import. The statistical data can be accessed with the button “Stat. records” (nr. 3 in figure 1) after they have been imported.

Now let’s have a look at the new options on the Trace list (after clicking on the list button). 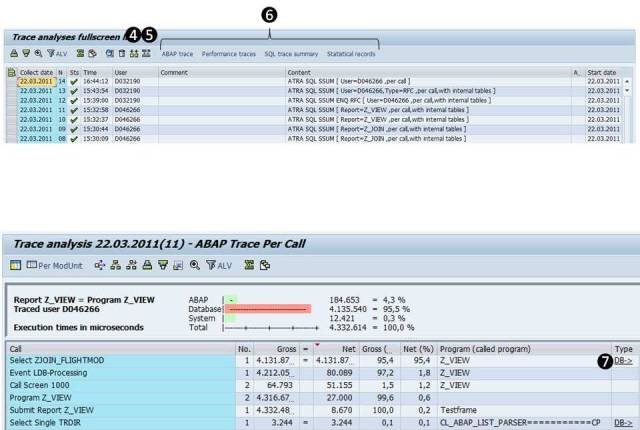 In the new version it is possible to compare (nr. 4 in figure 2) and merge (nr. 5 in figure 2) ABAP trace files. The comparison of trace files will be further extended in the near future. With the buttons below (nr. 6 in figure 2) you can directly evaluate the data starting from the trace overview list. Furthermore it is now possible to mark multiple traces e.g. to delete a bunch of traces. Please note that for the comparison you have to mark two traces and for the merge at least two.

In the ABAP trace analysis we can see some UI changes an ALV is used now which makes the analysis more convenient.

Another great option is the link between ABAP trace and SQL SUMMARY (figure 3). For SQL statements you can see a DB-> (nr. 7 in figure 2) sign at the end (which appears only if you have clicked on SQL summary before, see (nr. 3 in figure 1). This button opens the matching SQL records for this source code position from the SQL summary (figure 3) for the ABAP trace entry you just clicked on. This is like a join between ABAP trace data and SQL trace data which makes analysis even more powerful. 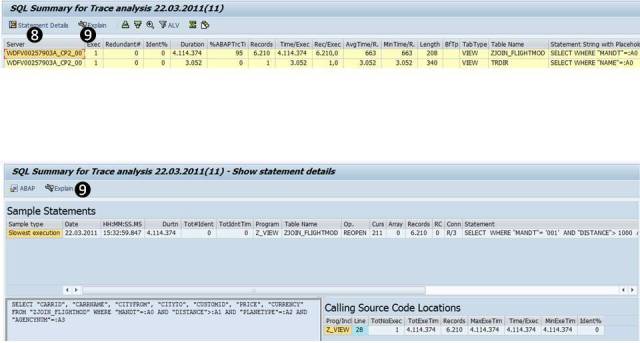 In the last months ST12 made a great leap forward. The options introduced above will make performance analysis more easy, convenient and powerful. As soon as I have some time I’ll blog about the new features in more detail, so stay tuned. You will find these blogs in the ST12 wiki mentioned below.