Most of the PI/PO adapters are running on Java. With PI 7.3 also the IDoc and HTTP adapter will be available for Java. Therefore for most of the scenarios Java only processing of messages is possible using Integrated Configuration objects (ICO).

For classical ABAP based scenarios the parallelization was mainly triggered by adjusting the parallelization of the ABAP queues in the Integration Engine. Now, since all the steps like mappings and backend calls are executed in the same queue the tuning of the Java based Messaging System queues is now essential. This blog tries to summarize the aspects that have to be considered when tuning the Messaging System queues.

The description is valid for all SAP PI releases. Newer versions have additional possibilities that will be explained where necessary.

Note: All this information will also be made available in the next version of the PI performance check via SAP Note 894509.

Wily Introscope is a prerequisite for the analysis discussed below. For more information on Wily please refer to SAP Note 797147 and http://service.sap.com/diagnostics.

There are four queues per adapter. All the queues are named <Adapter>_http://sap.com/xi/XI/System<Queue_Name>.
<Queue_Name> here stands for:

An example for the JMS asynchronous outbound queue is JMS_http://sap.com/xi/XI/SystemSend.

In a classical ABAP based scenarios a message transferred e.g. from JDBC to the JMS adapter will pass the Adapter Engine twice and will also be processed on the ABAP IE. The ABAP IE is responsible for routing and calling the mapping runtime. This is shown below:

In an Integrated Configuration all the steps (routing, mapping and modules) are processed in the Java stack only: 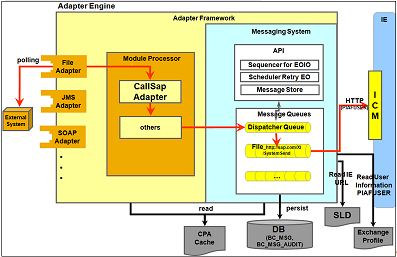 In a classical scenario a backlog will be most often seen on the receiver (inbound) side. The reason for this are the tasks executed in the Messaging System queue. The consumer threads on the sender (outbound) side only have to read the message from the database and forward the message to the Integration Engine. Since this are purely PI internal tasks this is usually very fast. However on the receiver (inbound) side the consumer threads will also be responsible for the Adapter module processing and the connection to the backend. This is more complex and external factors like network bandwidth or performance of the receiving system play a major role here.

In a Java only (ICO) scenario all the processing steps in the Messaging System are executed in the sender queue. The receiver queues are not used at all. Additionally to the above mentioned steps the consumer threads are now also responsible for routing and mapping. All these steps are executed by the sender consumer threads and therefore more time is required per message and a backlog is more likely to occur.

In general backlogs in the Messaging System can be caused in the following cases:

If further tuning is not possible also here the task is to avoid any blocking situations with other interfaces and avoid an overloading of the system.Based on the above description the aim of tuning of the Messaging System queues is to reduce the PI internal backlog but also ensure that connected backend systems can handle the messages received by PI.

In general backlogs on queues can be recognized using the Engine Status (RWB -> Component Monitoring -> Adapter Engine -> Engine Status) information as shown below. 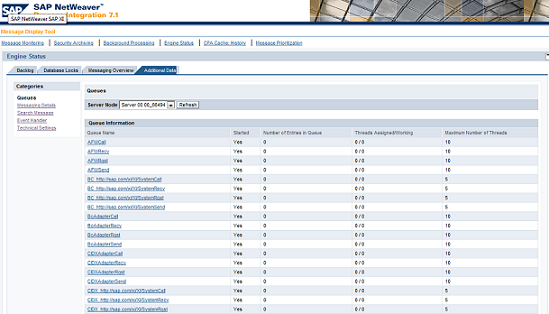 You can see here the number of messages in the queue and also the threads available and currently in use. This page only represents a snapshot for one server node. It is not possible to look at historical data or verify the thread usage on several server nodes simultaneously.

Therefore Wily Introscope is highly recommended. In the PI Triage dashboard you can see all the information in one screen and also analysis of historical data (per default 30 days) is possible. For efficient tuning of your system Wily is therefore mandatory.

Only a couple of parameters are available to tune the queue processing in the Messaging System:

2. Restrict the number of threads per interface:

4. Adapt Concurrency of Communication Channel:
Many receiver adapters like File, JDBC or Mail work per default sequential per server node. They use a synchronization barrier as shown below to avoid overloading of a backend system:

Since they only process one message per server node at a given point in time you should not dedicate too many consumer threads to it. As an example it makes no sense to simply configure 20 worker threads without setting maxReceivers.

To increase the throughput in such a case you also have to adjust the parallelism of the communication channel. For File and JDBC adapter this can be increased using the “Maximum Concurrency” value shown in the screenshot below. By doing this you will ensure that all worker threads that are allocated per interface are really processing messages. Of course the degree of parallelism highly depends on the resources available at the backend system. Setting “Maximum Concurrency” higher then MaxReceivers makes of course no sense.

5. Tuning the MS step by step
Via Wily it’s pretty easy to recognize a backlog. The screenshot below shows a situation where on both available server nodes most of the available worker threads are used for around 15 minutes. In case another runtime critical interface would send messages at the same time they would be blocked.

In case you notice such a backlog you should increase the number of consumer threads for the identified queue as described above.

6. Tuning the number of threads used per interface (classical ABAP based scenario):
Tuning of the Messaging System has to be done carefully since it has a direct impact on the resources required in PI and the connected backend. Often PI is a very powerful system and can overload connected backend systems easily.

The Wily screenshot below shows such an example. It is a batch triggered interface that sends in a very short timeframe a lot of messages that are balanced across all server nodes and then processed for a period of more than 20 minutes. 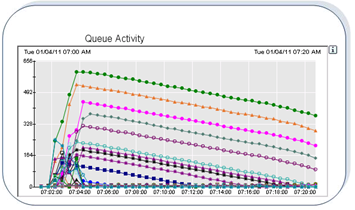 As stated earlier in such a situation per default all worker threads could be used with messages waiting for the backend system to finish processing. Thus, this interface can block all other interfaces from the same adapter type, who would rely on the same group of worker threads.

To overcome this restrict the number of consumer threads per interface using the parameter queueParallelism.maxReceivers. Looking at the below example we can see that the system has 40 worker threads configured (right graphic) but only 5 of them are used for processing the backlog. The reason for this is that queueParallelism.maxReceivers is set to 5. Thus, the remaining 35 consumer threads are available for other interfaces and no blocking situation would occur. 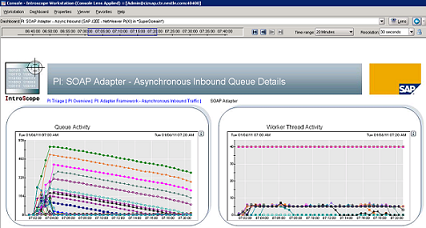