When I get asked what do SAP Mentor do? My favorite answer is: Create magic 😉 Here are 16 examples of last year’s mentor magic moments. [Putting this post together I realize how many there were and I am convinced that I missed many.]

1) Mastering SAP at the beginning of the year is a TechEd not run by SAP down under in Australia. They listed 9 Keynote presenters to convince their audience to come to their event. The first 6 of these listed where SAP Mentors. It worked, otherwise they wouldn’t have invited so many SAP Mentors again. Go to their 2011 home page and see a picture of the amazing knowledgeable humble Thomas Jung. Don’t miss the Inside Track the day before. 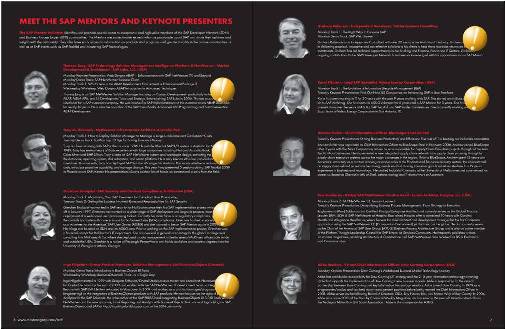 I added the SAP Mentor icon or lemon as some call it lovingly 😉 for an easier distinction.
2) Reportapalooza
I love the concept and execution of a reporting competition with audience participation. SAP Mentors Mico Yuk and Jamie Oswald were two of the 4 contestants that rocked the house.

3) Certification 5 are for me the poster child of passionate SAP Mentors getting together rolling up their sleeves and changing SAP. They wrote a 55 page white paper called: SAP Certification: A Fresh Perspective.

During Sapphire they got Bill McDermott’s attention and he kicked off an internal change project. 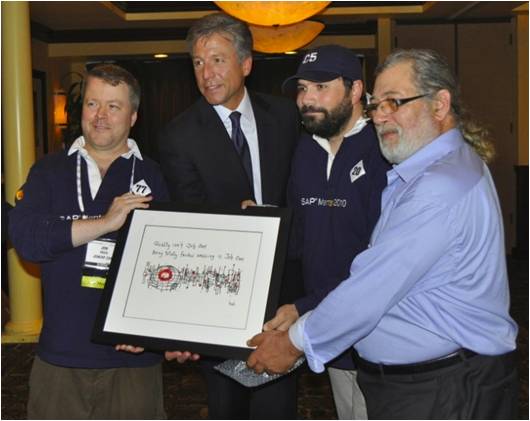 One of the outcomes is the forming of an SAP Certification Influence Council involving SAP, customers, and partners. 2 seats are reserved for C5 representing the independent consulting view/SAP community.

4) SAP Mentors asked the most questions at SAP Press conferences
Of course it helps to have Dennis Howlett on your team, but also without him at Sapphire and especially at TechEd the questions from the SAP Mentors were genuine, thoughtful and interesting. 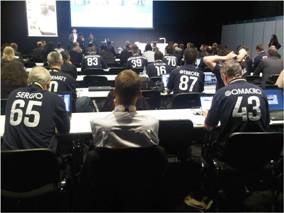 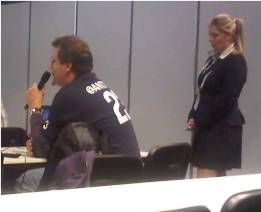 5) Catch the Snabe
On a lighter note, Tobias Trapp and Thorsten Franz invented a little game on the monster touch screens that were available at Sapphire and made a little video about it.

5) SAP Inside Tracks
Oh my, do they have grown. Was it really only in 2008 that Darren and Nigel organized the first one in London? 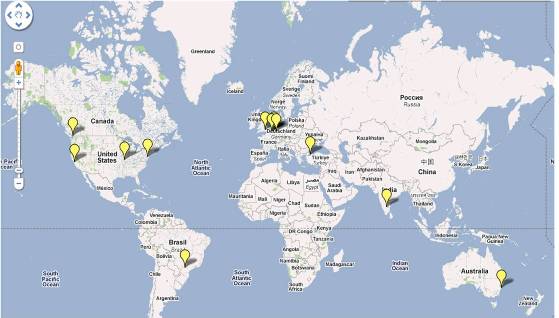 In 2010 there were 13 mostly driven by SAP Mentors. I especially loved Rich Heilman MCing the Philadelphia one. Who would have thought that this silent developer would rock house like that?

Also special kudos to Aslan Noghre-kar for enabling all of the inside tracks to be broadcasted and recorded. Really gave the whole thing a new dimension and enabled the next magic mentor moment. 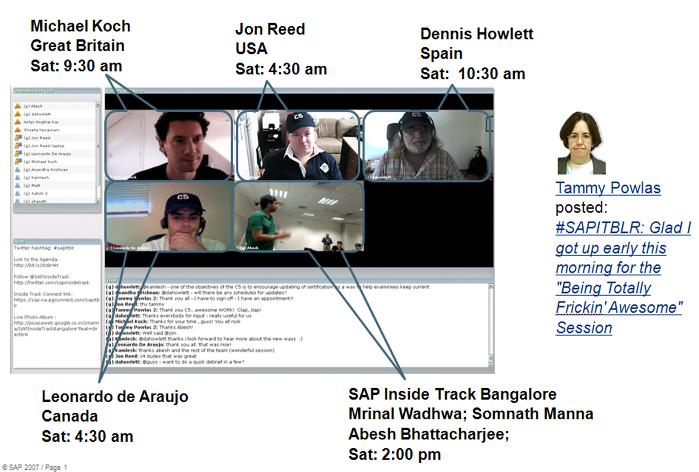 This screen shot I made my desktop background. On a Saturday in Bangalore about 50 SAP enthusiasts came together organized by Mrinal Wadhwa; Somnath Manna and Abesh Bhattacharjee. The screen shot shows Leonardo, Jon, Dennis, Michael presenting and sharing their insights for over 3 hours. For some of them it was 4:30am in the morning. Did I mention that it was a Saturday? The killer was when the folks wrapped up in Bangalore the C5 agreed to hang on for another 15 minutes to go over the lesions learned from the day.
8) Martin Gillet stickers
My favorite is this one: 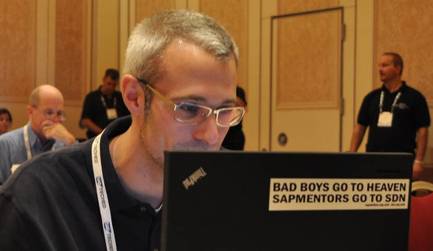 Because it creates a cognitive dissonance in my brain: I thought the bad boys go to hell? Now they go to heaven? So the SAP Mentors are the good ones, but if the bad ones go to heaven, are the mentors going to hell? Ah wait, is SDN therefore Hell? Why would they go there? And shouldn’t it be SCN? Something is wrong. Let’s read it again. And the loop starts anew 😉
9) Code Exchange
What Code Exchange is only magic moment number 9? Well this list is a bit chronologically and Code Exchange got formerly released during TechEd in the fall.

This is the future of how products will be developed. The idea was first presented to the mentors and received genuine approval. The SAP Mentors helped collecting and prioritizing the Code Exchange features. They were so integrated into the development that they were called the extended Code Exchange product team. That wasn’t even enough magic. SAP Mentor Gregor Wolf put the icing on the Code Exchange cake by developing versioning for it. Just marvelous!

It continues. If you check out the Code Exchange projects, many of them are created of have SAP Mentors as active members. 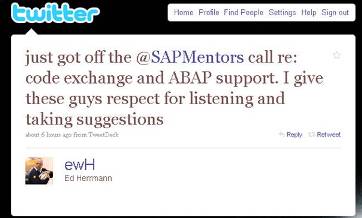 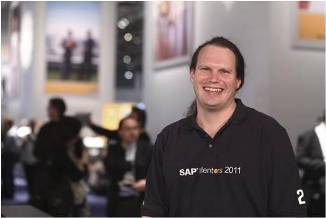 10)SAP Mentor Booth at UK-I User Conference
Idea and throwing the UK-I User Group confernce door wide open by Dennis Howlett. John Appleby grabbing the opportunity and running through that door with booth skins under his arm and DJ Adams, Phil Kisloff and Own Pettiford in tow. Let the magic mentor show begin. Check out Dennis’ We’re Not Selling Anything post. To be continued.

11) You guys always seem to have fun.
Herve Couturier brought Bjoern Goerke with him to his traditional SAP TechEd pre-conference mentor session. 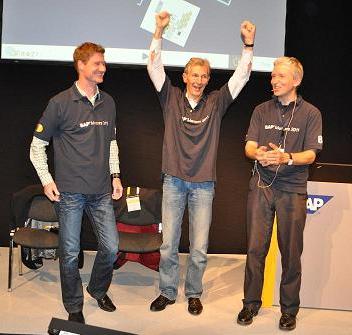 With Bjoern having the overall NetWeaver development responsibility the SAP Mentors had a lot of questions for him. After the sessions in Berlin and Las Vegas, Bjoern offered to continue via a webinar. It was a serious conversation with deep probing questions, but also with our usual banter on the side. At the end of the webinar he stopped shook his head and said: “You guys always seem to have fun.” Serious fun, another trademark of the SAP Mentor initiative 😉 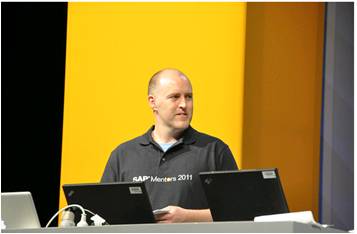 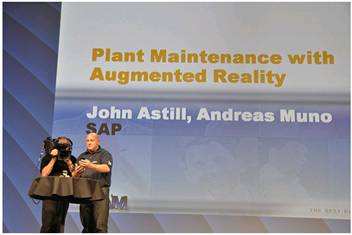 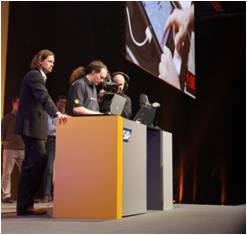 14) SAP Mentor Quarterly
New SAP Mentor Otto Gold saw an opportunity for a magazine kind of publication around SAP Mentors. Even though some SAP Mentor old timers including me coutioned that it is a lot of work, he still went ahead, got a handful of mentors to write an articles and edition 0 is out, I am scrambling to make sure that I write something in time for the first real release. 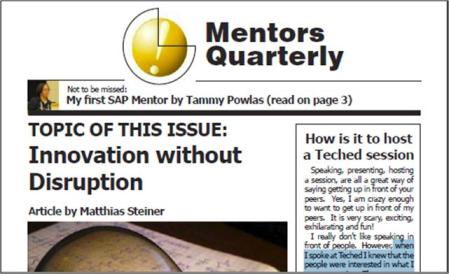 15) Student BI Club University Dallas Texas
I updated the SAP Mentor Introduction slides and asked the mentors to add what I missed and Tammy Powlas created a page for the Student BI Club of the University in Dallas. Apparently she is providing lectures and mentoring to college students.

Student feedback: I am very grateful to have an opportunity to work under such experienced people and create dashboards. We are going into a world for structuring data at the end of the day to discover hidden relationships and learn to differentiate the wheat from the chaff, hence, the program, the idea, excellent!This session really worked for me. I have learned about the reporting tool. The online session and demo lecture were really organized well.

16) Vishal Sikka happy to be an honorary SAP Mentor 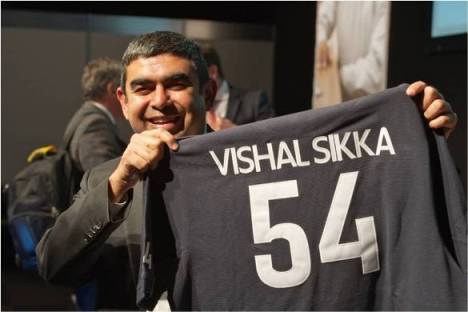 As you can see from his smile on this picture Vishal was really genuinely happy to receive his shirt.

I am convinced I am still missing many of the magic moments that the SAP Mentors created last year, with 100 of them around, it is hard to keep track. Please post yours in the comments.

If you think you can run with the friendly SAP Mentor Wolfpack (we have teeth, but we don’t bite), get Nominate New SAP Mentorsto become the next one.

Have updated the text, Demo Jam was a team effort of Alistair and Matt.

Daniel Graversen
January 21, 2011 at 3:30 am
That is a lot of different events. I'm amazed that all this could be done in one year.
+ a lot of excellent mentor online sessions.

Great stuff on the list and respect for the SAP mentors. Keep on creating magic! Catch the Snabe was very entertaining as well, looks like a fun game to play.

Former Member
January 21, 2011 at 8:29 am
And while people often make fun of me for having all those mentor stickers from Martin Gillet on my laptop, other people have stopped me and asked where they can get one...

Great blog. How come I don't get the mentors quarterly?