Splitting a SAP Netweaver BW 7.0x Dual Stack using SAPinst export/import is not supported but not impossible either.

It’s not the intention to go and get everyone on board to go do unsupported work. I have written in some of my blogs that I interpret “impossible or not supported” as “not been done yet” and this sometimes pops up while I’m at work and as a consequence I won’t hesitate to try something out. Writing it without given any example is not really clean so this blog can serve as an example.

If in the past no one started cutting open a corpse to learn more about the human body, they would not know as much as they know today but someone had to start doing it. 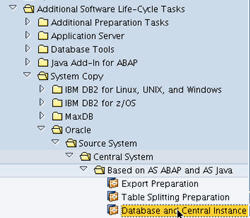 Exporting the java stack is done by using the regular procedure (you can follow the SAP guide available).

On the screen with header SAP System > Database Export you only select the Java Schema (see picture 1.2).

Continue and let SAPinst export it and finish

Result is that after this procedure you have an export directory with your Java stack.

Once you are in the first screen, stop sapinst (don’t clean up). Pick to option so you can continue sapinst later.

A short interruption and some information on SAPinst XML files.

In the directory from which you run SAPinst you also have the XML files which SAPinst uses:

It’s possible to modify one or more of these xml files and start SAPinst up again. When SAPinst starts up again it will read those xml files (to know where you left off and what parameter values are set etc) and continue the installation. This can serve for many different purposes:

The question is where does it go wrong? SAPinst will notice that the export you have and place available is from a dual stack SAP source system (due to the labels, files and folders that are part of the export). Because of this, the SAPinst installer will know and will throw an error that it’s not possible to import an export taking from a dual stack (although you only selected java stack) into a single stack Java.

“Importing the Java dump from a double stack system into a Java Only system is not supported.”

This is checked by the control.xml file using some java coding:

if (!hasABAP && hasJava) {
ASSERT(arguments.callee, sourceInstanceIsJavaOnly, “Importing the Java dump from a double stack system into a Java Only system is not supported.”);
}

Throwing out these lines from control.xml (perhaps I threw out or changed more lines but it’s not my intention that everyone will start doing unsupported work), saving control.xml and starting up SAPinst again and the import of a Java dump from a double stack system into a Java Only system can begin.