ASUG BI/BusinessObjects 4.0 Roadmap and Strategy Webinar Review: “Pumping it Up!”

As part of our year-round planning for America’s SAP User Group, we asked our great ASUG SAP Point of Contact Ingo Hilgefort to set up webcasts on BI BusinessObjects 4.0.  He did not disappoint and as usual, exceeded our expectations.  Although we had 33 successful webinars last year and we were named ASUG Community of the Month last April,  the ASUG BI Community has already “pumped it up” with 17 webcasts already scheduled, thanks to our great partners at SAP.

Our first 2011 webinar was on Business Intelligence Strategy and Roadmap, given by Dan Kearnan, SAP.  The focus of this webcast was to first explain the SAP BusinessObjects Business Intelligence Platform, and its connections with SAP applications. Then he reviewed the roadmap of what is new in BI 4.0.

As part of the overview, Dan explained that SAP will not enhance or expand out the BEx BI tool set but will still support it.

With 4.0 coming out around the corner, all the BI tools will be able to leverage this new BICS connectivity. 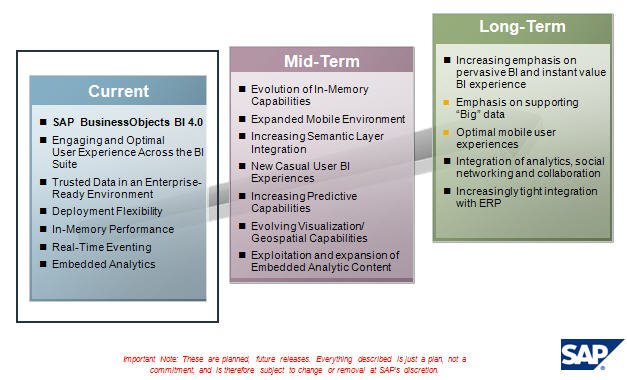 Dan explained that BI 4.0 was 2 years in the making.  BI 4.0 is in ramp-up today, meaning the release is “code-frozen” – ramp-up customers provide feedback.  Once they meet the key performance indicators for ramp-up, then general availability is expected in Q1 or early Q2 of 2011 for use in SAP and non-SAP landscapes.

Dan said the message of 4.0 is all information, all people, one platform.  For “all people” a user design team started 2 years ago on how to improve the user interface and their touchpoints.  For platform, you will see improved system monitoring.  For smaller companies there will be lightweight deployment options.

Dan said the Common Semantic Layer is a new feature on 4.0, expanding on the 3.x Universe.  Dan said it  is “the universe on steroids”.

In the past, Web Intelligence was the primary tool to access the Universe.  Three take-aways for the Common Semantic Layer:

Dan suggests to go to ASUG Annual Conference this year to learn more about the Common Semantic Layer.

New User Interface to Increase End User Adoption
BI 4.0 provides consistent view of how tools used across the board – Crystal, XCelsius, WebI, will have a similar UI.  This is similar to what MS Office did in 2007 with Excel, Word.  SAP did the same thing with menus, color schemes, layouts are  part of one family – moving from one tool to another – same for BI Launchpad.

For platform improvements, see The Road to BI 4.0 blog.  Additionally, BusinessObjects Enterprise will be part of Solution Manager to be monitored.  BOE Lifecycle Manager will be integrated with SAP CTS+.

SAP took best of BEx with the intuitive look and feel of Voyager to produce next generation of BEx: Analysis.  With Analysis, you can access to BW as well as other OLAP data sources such as MS Analysis Server.

Embedded Analytics within the Business Suite:

Dan said the typical SAP Gui user doesn’t like to leave the business suite.  So with Enhancement Package 5 (coming in 2011)  Crystal Reports and Xcelsius dashbards are embedded into the SAP application.  The market name for this is Business Suite Innovation 2010.

When the Embedded Analytics comes out, using the enhancement package concept, you can install and choose what to install and one component will be the embedded analytics.  Dan said hundreds of Crystal Reports and XCelsius dashboards are pre-delivered.  He said it depends on licensing model if you can create or change XCelsius or Crystal Reports.  He said this is the ”more pervasive” – one BI experience.

Some Q&A from the Webinar Chat – questions from webinar attendees with Dan’s answers:

Q:When you refer to Business Intelligence platform, do you mean BOE server v4.0 or all BObj/BW applications?

A: We mean SAP BusinessObjects Enterprise 3.x or 4.0

A:   It will still be supported.  Check this SCN link for BEx 3.x support

Q:I heard functionality of BEX Query designer will be done at Common Semantic Layer (CSL). If this is true whats the future of Query Designer and how will transition from Bex queries to CSL happen

Q:is there free delivered business content (reports/dashboards) for Business Objects? if so, where?
A: SAP Integration Kit – some standard reports

Q:Where does BEx query designer fit into this picture?
A: It is still part of strategic direction going forward

Q:How are customers taking the strategic direction going forward for SAP BI?
A:  When Dan talks to customers, they ask when is the best time to move to BusinessObjects?  We already have an investment in BW.  Dan says to do a gap analysis – see what end user requires, tools today, and see gaps.

Q: When is 4.1 planned for release? Need to know since 4.0 does not offer all the functionality that 3.1 is offering
A:  4.1 is traditionally planned about 6 months after the general availability of  4.0.

Q:Is there a new licensing structure planned for 4.0+?
A:  Not dramatic but tweaked and more streamlined – see your sales rep.

Q: So are you saying that WEBI, etc will connect directly via BICS in ADDITION to Universes?  A constant struggle for us is Universes built on BEX.
A: Over the last 2 years improved WebI connections to BW…done via BAPI’s via service packs/enhancement packs.  WebI will use BICS in 4.0

Q: Does the Common Semantic Layer replace all the features of legacy Crystal BUSINESS VIEWS as well as Universes…?
A:  CSL does a lot of business views in past…Business views are not part of strategic direction going forward…parallel – can use 3.x universes along with 4.0.

So what was the feedback we received from our first webinar?  From an ASUG member on ASUG.com posted “It was a really good webcast … lots of interaction and feedback.”

We have 10 more BI 4.0 webinars to go plus ASUG Annual Conference this year.  I am particularly looking forward to Ingo Hilgefort’s January 27th webinar SAP BusinessObjects 4.0 – Integration with SAP.

The ASUG BI Community thanks Dan Kearnan for this webcast and Ingo Hilgefort for arranging a great set/schedule of BI 4.0 webinars.

Bringing new innovations to the way we learn BI in 4.0