I will be the first to admit that I had never heard of Quora prior to the beginning of 2011 when almost out of the blue everyone seemed to be talking about it. Let me give you a little background about Quora.

Per Wikipedia, Quora is an online knowledge market, founded in June 2009, launched in private beta in December 2009, and made available to the public on June 21, 2010. Quora aggregates questions and answers to many topics and allows users to collaborate on them.

Dennis Howlett a very respected analyst and SAP Mentor chimed in with a good write up called Quora: the latest craze you might wish to explore. You can sign in with your twitter or facebook account which would explain help explain the viral growth as almost overnight my inbox was being flooded with new followers. Being a big believer in the value of twitter for an SAP professional I thought I would give Quora a test drive and started by asking the question “What value can Quora bring a SAP Professional” 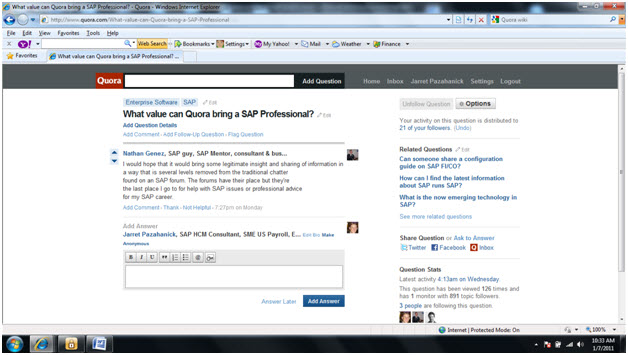 “I would hope that it would bring some legitimate insight and sharing of information in a way that is several levels removed from the traditional chatter found on an SAP forum. The forums have their place but they’re the last place I go to for help with SAP issues or professional advice for my SAP career”

There seems to be a general sense in the marketplace that if you ask a question on Quora you are going to be able to get a specific answer from an expert. Quora believes it has a plan in place to maintain a high level of quality but I question whether it will be able to maintain its “campfire atmosphere” and avoid a deterioration of quality in both questions and answers as it grows.  As a SAP forum moderator I think it is pretty obvious that deterioration has already occurred within SCN forums, which is understandable to a degree given a community with 2.3 million members.

Using Quora got me thinking about the SCN forums as it is one of the main areas where SAP questions and answers are currently exchanged. I will start off by saying that I personally don’t think Quora will ever be a threat to the SAP forums as everyone knows the amount of SAP expertise that is active on SCN. That said I think there is a real opportunity for SAP to enhance the functionality within the forums or add a new area for “Quora” like questions.

SAP has done a great job through the years with the SAP community network and I think this may be an opportunity to enhance SCN to ensure that the valuable information and experts spend their time here versus a Quora or Quora “like” product. I don’t have all the answers but am hoping this article starts some good discussion on the topic.

Darren Hague
January 14, 2011 at 1:42 pm
If you think Quora is good, you should check out Stack Overflow and the other Stack Exchange sites - much more developer/technical-focused, and a pretty good reputation system too.

Disclaimer: My own opinion, not SAP's!

Martin Voros
January 16, 2011 at 8:32 pm
My comment is slightly off-topic but I use it as a request for a new feature. When user enters a title for his new question stackoverflow system automatically looks for similar questions and displays it to user. This is in my opinion a killer feature which might significantly reduce number of questions is some forums here on SDN.

So personally, I would rather see some more cool features implemented here on SDN than migrating to new site.

Thanks for your comment and I think adding functionality to the forum so the same question cant be asked twice is a great idea (I actually had it in the first draft of article). I would recommend you putting that idea out on the idea place http://www.sdn.sap.com/irj/scn/idea-place

Jarret Pazahanick
Blog Post Author
January 17, 2011 at 3:55 am
Need to spend some more time on Quora to see if I think it is good/valuable as the jury is still out.

Thanks for the tip on Stack Overflow as I will check it out.

Former Member
January 14, 2011 at 4:30 pm
I heard somebody today wonder if LinkedIn Answers would go away because of Quora. I think it depends on many factors...where experts decide to congrate and in how many places people want to be a member. I am following Quora loosly but am not too excited about being member of yet another community. I don't see it as a specialiced forum (yet). I had a question about editing a flip file and did not get a good answer...

Jarret Pazahanick
Blog Post Author
January 17, 2011 at 3:49 am
Thanks for the comment and I am currently the same way with Quora as I am really just keeping my eye on it to see if it is something where the effort/time committment with be worthwhile. I think we can all agree that the SAP experts are using SCN and I dont see that changing anytime soon.

Martin English
January 16, 2011 at 8:37 pm
The functionality of the underlying forum software has some impact on how popular a given site is.  However, more important is the sense of community around the site; for that reason, even though both Quora and Stack Overflow ( http://stackoverflow.com/questions/tagged/sap ) have a fair number of SAP related questions, there's no specific SAP community around them.

Obviously, this can change over time; the question is how and when.  This isn't dependent purely on Quora and / or Stack Overflow; for an extreme example, if the SDN rules changed so that you had to be SAP certified to answer forum questions, that would drive a lot fo people away.  On the other hand implementing tighter SSO between SDN, CodeExch, Idea place and the service marketplace would make all four more usefull (and therefore more attractive) to SAP practitioners.

Personally, I find the integration that already exists to be useful enough to make SDN my major goto site (although I'd like more !!), but its only one of many sites I use daily.

Jarret Pazahanick
Blog Post Author
January 17, 2011 at 3:52 am
Thanks for the comment Martin and SDN is my major go-to site for SAP as well although over the past 6 months I have spent as my time on Twitter as SDN.

SCN does have a great community and that will be something that will be very difficult for Quora or Quora like product to duplicate.

Witalij Rudnicki
March 25, 2011 at 11:18 am
Curious about your thoughts about Quora today, as dust has sattled on it?

Jarret Pazahanick
Blog Post Author
March 25, 2011 at 11:25 am
I am typically not an extremely early adopter of new technology as I get in about 10% of the way in (which is still earlier than most) and if I find value than I work to make up for lost time.

On Quora I was actually early and maybe to early because I have only logged in 3-4 times in the past two months. Part of it may be that answering questions from strangers isnt my cup of tea or the fact that I am not smart enough to see the value Quora brings for an SAP professional.

I think that for the first person there is value but SCN, Twitter etc add a lot more value and would be the first places I would recommend if SAP pro's have time.

Former Member
March 30, 2011 at 8:42 am
Vitaly, not that you asked ME :-), but I've been using Quora quite a bit and have only gotten about 2 out of 5 questions answered at all. Only one of them satisfactorily.

On the other hand, I found many of my answers on Twitter, and in record time. It tried LI Answers and did not get any response, even though I asked about LI functionality. Last, I tested FB questions and it seems like a good tool for advertisers (oh no). I see the place for all these tools but especially after the hype Quora got in the press, I am disappointed. Other views?

Witalij Rudnicki
March 30, 2011 at 4:22 pm
Natasha, my perception is that Quora did not become viral website besides the whole viral hype surrounding it 🙂

I agree with both of you on Quora. I wish I would have been earlier on twitter as there is some real value there but I am doing my best to make up for lost time 🙂