A Spotlight on the New .NET Connector 3.0

SAP .NET Connector 3.0 is now released and you surely want to know more about it.. In this weblog I want to

By learning some relevant details of the two demo applications you will get some understanding of the new programming model of the .NET Connector 3.0. In addition, I mention some other use cases such as stateful or transactional scenarios without going into any details.

The Benefits of .NET Connector 3.0

For mass transactions or heavy load scenarios the NCo is an important alternative to Web Services or SAP Process Integration. Maybe you are still using NCo 2.0 and do not really know if and why you should upgrade to the next NCo release. So what is the benefit of upgrading to NCo 3.0 and why should you invest in this procedure. After reading this weblog you should be convinced that the payoff for upgrading to NCo 3.0 is worth it. In particular you will learn that NCo 3.0:

This weblog is a spotlight that should give you an impression of what using the new .NET Connector 3.0 is like and a first idea of how to work with this new release of the NCO. If you are interested in some more details look at this overview document on which my weblog is based.

If you want to download the .NET Connector 3.0 and you have a user in the SAP Service Marketplace you can download the new NCo and its documentation here: https://service.sap.com/connectors -> SAP Connector for Microsoft .NET.

SAP has spent quite some effort on making the new NCo more secure and has placed a special emphasis on security concerns. In particular it is now much more difficult for an intruder

In order to store configuration data in a secure way you can now keep it on a central LDAP server and read it on the fly from an LDAP by using the following approach:

When the .NET Connector needs logon data to open an RFC connection to an Application Server ABAP, it looks into your code for the relevant information. In order to provide it you need to implement the interface IDestinationConfiguration and register an instance of that class with the .NET Connector when you start your application. These are the necessary steps:

Using this approach you obviously can write simple configurations for demo scenarios that have the configuration in clear text in the code as well as real world configurations that draw the relevant configuration data from an LDAP server, an encrypted file or some other source of your choice.

One main difference to .NET Connector 2.0 is that there is no need to pay any attention on how to handle the connections. The internal technical details of opening, closing, and managing connections are no longer handled by the application developer. Instead, the complete connection management is done by the .NET Connector. You no longer have to worry about this. Another important difference lies in the way the parameters that are exchanged with the ABAP application are handled.

Take a look at the simple application below to get a first impression of what working with the .NET Connector 3.0 is like. This way you will easily grasp many of the advantages of the new NCo 3.0.

As I mentioned, for creating a demo application it is, of course, still possible to store the configuration data including the password in clear text in a configuration file. In our little demo here, we take the password from a simple implementation of the provider method GetParameters of a class that implements the interface IDestinationConfiguration. But you should not do this in a real world application. It is just a handy way to provide the logon information in demo scenarios.

In order to give you an example that runs on your system, I show you a complete small application. So this is what the class providing our configuration data plus some declarations looks like:

Creating the client coding is very simple and straight forward:

Though the example is very simple just some comments on the relevant steps (confer the outcommented digits at the end of the lines):

If you are familiar with .NET Connector 2.0 two main differences will strike you:

If you take care of closing all the brackets in the example, you can copy it to your development environment, reference the relevant .NET Connector libraries and input the configuration data for a real Application Server ABAP that has the BAPI BAPI_COMPANY_GETDETAIL. If the user that you provide in your configuration has the authorization to call this BAPI the program will run on your system and output a result in the console

How to Keep the State

The example I have shown you works with a stateless synchronous RFC which means that the invoke method not only gets a connection from the relevant pool and executes it, but also resets the session on the ABAP system and returns the connection back to the pool.

The two Invoke() calls for the first and second BAPI check, whether there is a connection bound to the current thread, and if they find one, they use it for their call. Also the context of the relevant ABAP session is kept until the EndContext() detaches the exclusive RFC connection from the current thread, performs a backend context reset on that connection and returns the connection to the pool.

If you work in the context of a .NET Server with a session management of its own you just need to create your own ISessionProvider object and register it with the RfcSessionManager. But this is something I will not show or explain in any detail here.

The .NET Connector as a Server

If you use the NCo 3.0 as a server the philosophy behind the programming model is the same as in the client use case: The NCo handles many things for you so that you need not worry about many problems, because the SAP connectivity team has solved these problems for you.

In particular this means: First of all, as in the client case, the management of the connections is done completely by the NCo, and again you can store your configuration data outside the application proper wherever you like in any form you like. Secondly, you need no longer trouble yourself with another quite complex task that you had to take care of with the former release of the NCo: By default, the thread management is done by the NCo 3.0.

Again I will show all relevant steps by guiding you through a simple example that presents a basic stateless NCo server. It consists of three new classes:

So let us start with the class providing the server configuration:

As in the client example we first need a class to provide the necessary server configuration, technically this is a class that implements the interface IServerConfiguration and as a consequence has a GetParameters method. In this case we define a configuration with the name PRD_REG_SERVER.

For the server in NCo 3.0 with dynamic metadata lookup, you need two connections: one client connection for the DDIC lookup and a server connection to enable the ABAP system to call the .NET Connector server. And as a consequence you need two sets of configuration data:

As for the client connection we reuse the configuration data from the previous client example PRD_000. This means that you have to include the class MyBackendConfig (but without its main method, because we do not need this method here) if you want to run this server example.

As for the server connection you have to connect to the ABAP system by using an intermediate SAP Gateway. This is shown in the figure below: 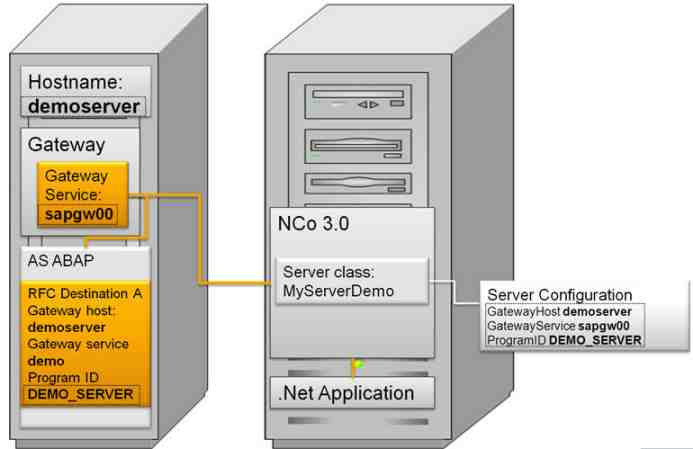 To those familiar with how to configure an NCo 2.0 server it will be no news how you connect via the intermediate SAP Gateway. Still, I want to spend some words on it for those who don’t know how to do this. You need these three values:

in order to identify the server destination uniquely. You must provide the same values for these parameters both when defining the .NET server configuration as shown above in the code example and when defining the RFC destination as a TCP/IP connection in the transaction SM59 as shown below in the next figure: 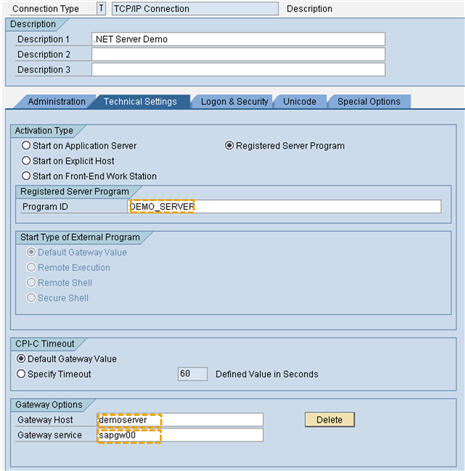 So much for our explanation of how to get the configuration data of our .NET server program. Next we need a class that provides the handler method for a call from an ABAP system that calls a function module STFC_CONNECTION on our .NCo server.

Creating a Handler Method in the Server

In general to provide one or more handler methods, we have to implement one or more methods that will process incoming RFC calls. In our example we choose one static method for each function module. We assign an annotation to the method as shown below:

The two parameters context and function are provided by the .NET Connector runtime when the method is called.

You could also have one static method as a default for all function modules that don’t have an explicit method assigned to them. Just set the attribute Default in the annotation to true. It is also possible to work with instance methods in the same manner. You should use this if you create a stateful server, but I will not show this in any detail here in this introductory weblog.

So this is what the handler method for the function module STFC_CONNECTION looks like in our example:

Create and Run the Server

With the configurations defined and a handler class with the relevant handler method prepared we have now all we need at hand to write the server class:

This is what happens in this method (see the commented-out digits at the ends of the lines):

That’s all. This simple code suffices to set up a server that can not only handle calls of the function module STFC_CONNECTION, but handle up to 5 parallel calls because we have set the RegistrationCount to 5 in the MyServerConfig class.

Just remember: To make the program run, copy the code of all four classes MyBackendConfig (without its main method), MyServerConfig, MyServerHandler, MyServerDemo plus the information on used name spaces to your .NET development environment. You must also adapt the configuration data accordingly so that you can connect to a real SAP Gateway and a real ABAP Application Server.

Of course there is much more that you can do with the new .NET Connector 3.0 and much of it is described in the overview document I have already linked above. Just to mention a few more scenarios that are possible with NCo 3.0:

Apart from any details, all these use cases have one feature in common: You need not directly interact with connections, that is, open and release them. Instead all connection handling is done transparently from you by the .NET Connector 3.0. All you have to do is to provide the relevant configuration data. Of course the tRFC/qRFC/bgRFC examples are more complex as they require you to provide the storage of the TID and the payload data and some more code. But this is another story and as many other details beyond the scope of this introductory weblog.

You have now seen how easily you can write a stateless client and stateless server scenario using the .NET Connector 3.0. You certainly have realized that the code is far more transparent because of the separation of concerns realized in the new .NET Connector architecture:

As mentioned, other scenarios such as transactional calls are also possible in the server and the client case. They are sketched elsewhere. I hope this weblog has shown you some of the many advantages of the NCo 3.0 and inspires you to try out the new .NET Connector 3.0. I am sure that sooner or later, you will adapt your existing applications for NCo 2.0 to NCo 3.0 and thereby make them more transparent and secure and profit from the better design that comes with the separation of concerns.