Two months ago, I argued “Why Mobile Business Apps Will Flower in 2011“. My blog post got some backlash from readers who didn’t believe that companies were starting to understand the benefits mobility could bring them.

Here’s some evidence backing up my original argument. In a survey released today by Kelton Research and sponsored by Sybase, 90% of IT managers said they planned to deploy new mobile apps this year (see the press release).

The online survey quizzed 250 IT managers in the U.S. and UK at companies with revenue of $100 million or more. It had plenty of other interesting findings: 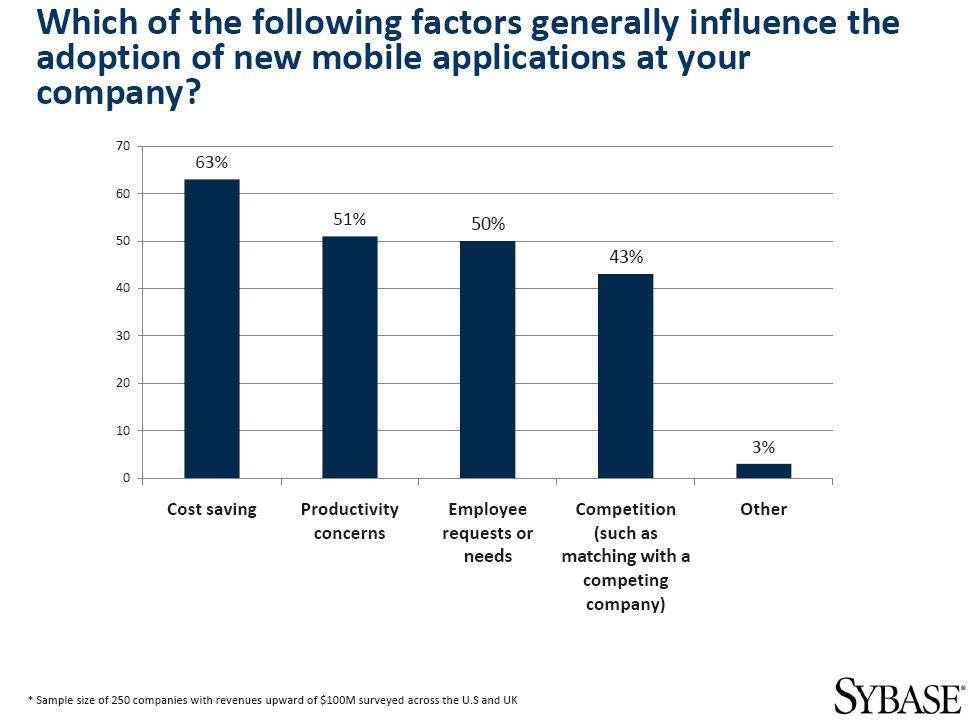 1) Saving money is the most popular reason (63%) for companies to deploy mobile apps. Frankly, I expected employee demands to Bring Their Own Device or IT managers trying to keep up with the Jones/competitors would be the top reasons. Not so according to the IT managers surveyed. It’s heartening, as it shows that mobilizing appears to be a fiscally sound strategy, not something with a pie-in-the-sky ROI. 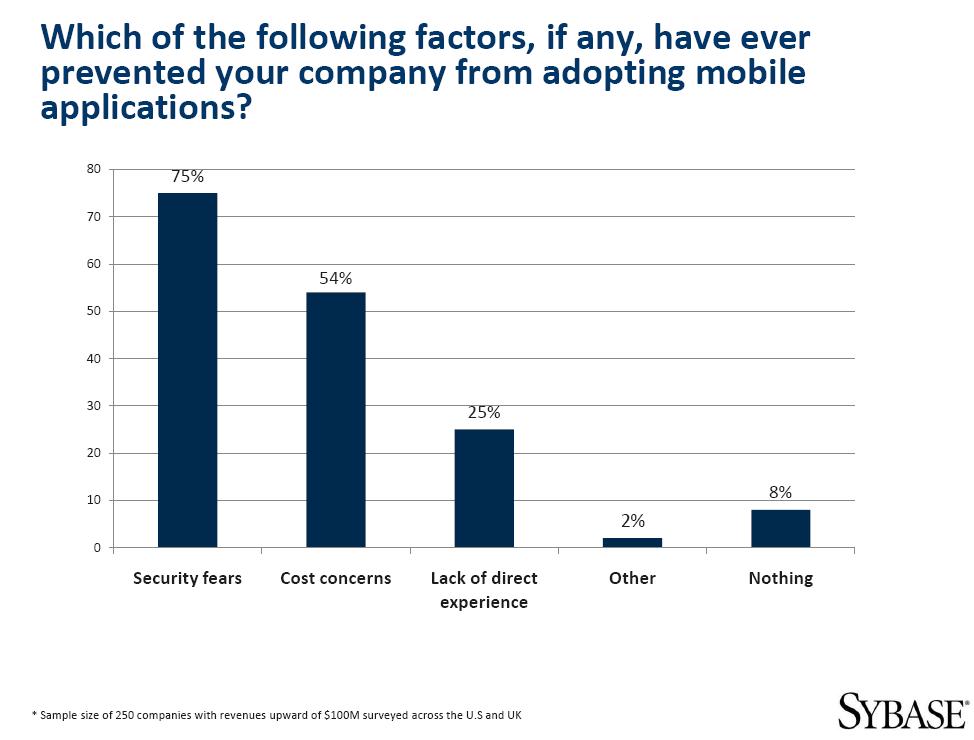 2) Security remains the biggest inhibitor (75%) to deployment. Which is too bad, since there are a number of proven solutions out there, including Sybase’s own market-leading Afaria product, and the mobile device management service based on Afaria technology and hosted by major telecom partners including Verizon Business, Orange and others. 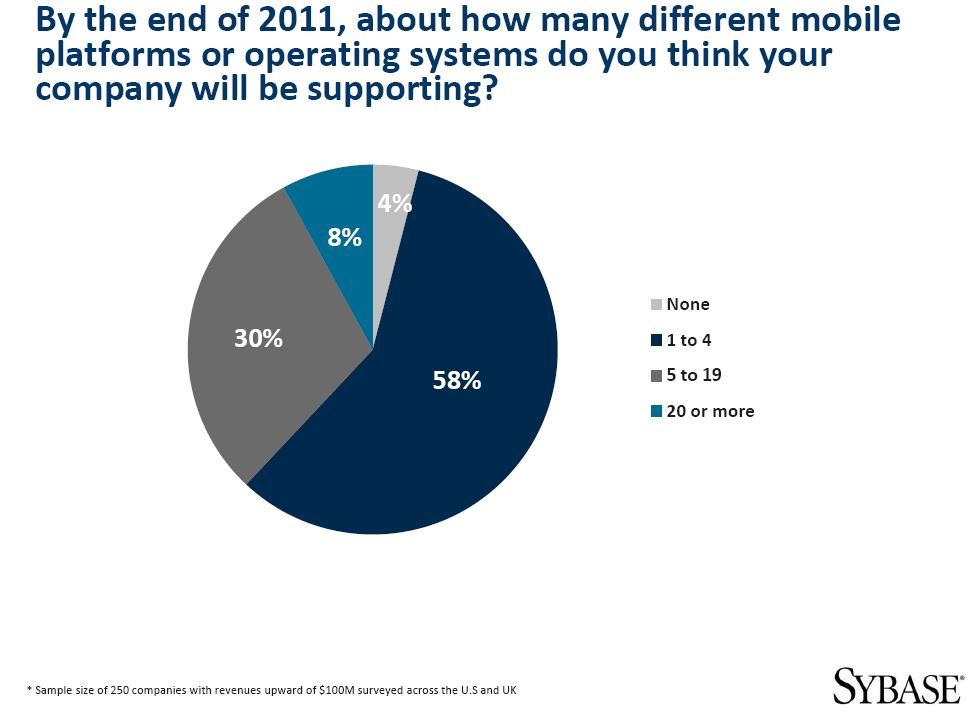 3) Diversity rules. Nearly four out of 10 (38%) of enterprises expect to support five or more mobile platforms or operating systems. 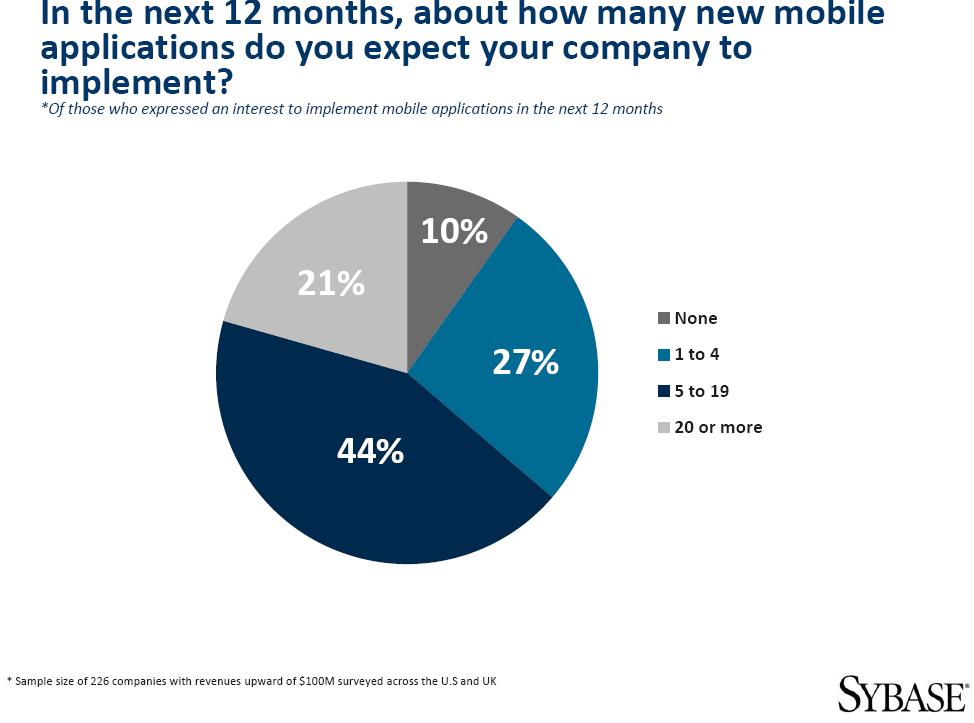 4) Apps are taking off. Consider that 2/3 (65%) of respondents said they’ll deploy 5 or more mobile apps this year. 21%(!) say they are deploying 20 or more. As my Sybase colleague Dan Ortega put it, that’s a fast, running start towards mobility that will likely help those companies leapfrog their competitors, the same way that e-business separated the innovators from the laggards.

5) Mobile fans are in the majority in most IT departments, with 56% seeing it as “crucial to business,” and 55% espousing a timeline for rolling them out.

Former Member
January 13, 2011 at 6:18 am
Thank you for sharing this information!  I’m excited to see the mobility trend continue to grow and not just be something that’s talked about.  Being in the younger generation, mobility is important to me and should definitely be considered by most companies.