In an earlier blog, I wrote about the Banking Industry Architecture Network (BIAN), an independent organization that is defining standards for service-oriented architecture in the banking industry.  BIAN’s members are banks and software providers.

I explained that BIAN is breaking down banking functionality into discrete modules, and defining service interfaces to those modules.  BIAN calls this breakdown the Service Landscape.  The idea is that an agreement among banks and software providers about the boundaries of and interfaces to these modules will make it easier to integrate modules developed in-house by banks with modules obtained from software providers.   Ideally, providers will make clear which of the modules in the landscape their offerings cover.

In that blog, I showed Version 1 of the Service Landscape, which starts with a hierarchical, functional breakdown of banking into Business Areas and Business Domains (see the figure below).  The modules with the service interfaces are contained within the Business Domains.  For example, the Marketing Business Domain of the Sales & Service Business Area breaks down into the following service modules: Campaign  Management, Campaign Automation, and Lead Management.  This three-level breakdown is the BIAN Service Landscape. 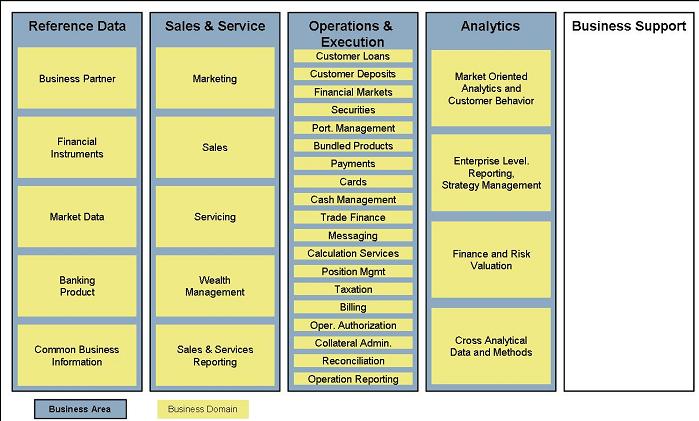 As BIAN members took Version 1 out to a constituency that is considerably broader than the initial membership, they made an interesting discovery.  The boundaries of the service modules held up quite well when inspected by other parties, notwithstanding that all recognized that BIAN had so far identified only a fraction of those modules.  However, different banks – and even different divisions within the same bank – had widely differing functional breakdowns at the top two levels of the hierarchy.  The implication for the next version of the Service Landscape is that BIAN service modules are elemental building blocks that can be assembled within different hierarchies of Business Areas and Business Domains, as in the figure below. 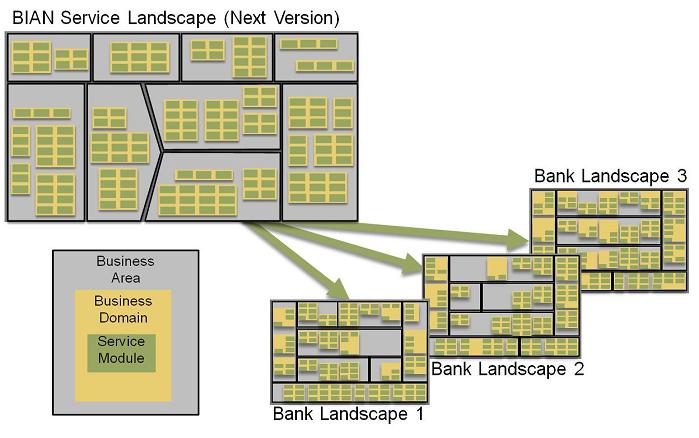 Consequently, as BIAN works on its next release of the Service Landscape – which will define a much more complete set of service modules – it will position the Service Landscape somewhat differently than previously.  The top two levels of the Service Landscape – that is, the levels containing Business Areas and Business Domains – will constitute a reference model only, to which banks and software providers are not obligated to align in order to be BIAN-compliant.  The service modules within the Business Domains, however, will be official BIAN standards, meaning that banks and providers have to respect their boundaries and interfaces to be BIAN-compliant.

The upcoming version of the BIAN Service Landscape should be released in the first quarter of 2011, so stay tuned…