I lived in the “Windy City” of Chicago, oh, about 3 decades ago.  As it was the formative years of my life (but which ones aren’t?) I recall high points in my professional career development, my world views (or my conceptual continuity), and the lows.  I lived in several multiple tenancy buildings, with multi-tenancy now being a buzz word in vogue.  I’m going to talk about some architectural abominations, and a few distantly related concepts. 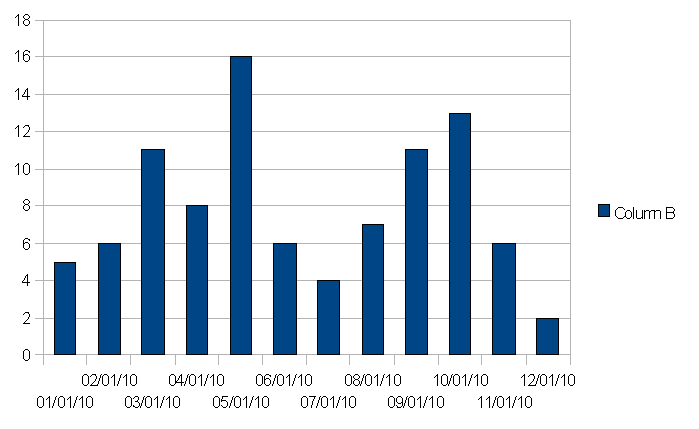 Above is a quick/dirty chart.  It resembles a traditional city skyline, maybe Manhattan with a downtown surge, and a mid-town bubble, certain areas enjoying common growth because rich buildings want to hand around with each other, it’s no fun being a skyscraper, or big kid on the block, unless you’ve got other big kids to compare yourself to.  A basic playground axiom, if you will.

That’s not what data this chart represents though.  These are the numbers of blogs I’ve posted on SCN each month during 2010.  I thought I was slowing down in the fourth quarter, but it looks like my “downtown” is still bad (Leroy Brown).  I have another 2 weeks.

Back to the architectural meme.  In Chicago, as in other cities in the late 20th century, housing space was at a premium in the pricey neighborhoods.  Developers wanted to make those quick bucks filling in the niche plays where large lots and huge opportunities were slim.  So they took to grabbing plots of land where a single family house stood, or perhaps a small apartment building, and erecting a tall, but extremely skinny building, often quickly, and sometimes in the middle of a block of 3 or 4 story buildings there would be a 20 story anomaly.

What does this have to do with software?  Think of the stately old mansions on a quiet leafy street as your enterprise architecture.  It works, it’s functioning and all the components get along.  Then suddenly one of your neighbors sells out to the schlock slingers from get-rich-quick needle software company and they’ve leveled one of your platforms and are throwing up a monstrosity all out of proportion with the grace and elegance of your working class neighborhood.  Sort of like what I think about “mobility” as the be-all-and-end-all of enterprises today.

Just this week, fellow SAP Mentor John Appleby SAP Influencer Summit 2010: What’s really happening in Enterprise Mobility? about SAP Netweaver Mobile and the evolution of that niche of Darwinian specialization.  The answer, or an answer, came from SAP pretty quickly.  Too quickly in fact, as the architectural plans and specifications that were posted in reply, or rebuttal, to John’s challenge (“kiss of death for Netweaver Mobile”, reminiscent of the “kiss of death for Java and SAP”) was inelegantly dismantled before our very eyes.

In an almost unrelated piece, another fellow SAP Mentor, Jon Reed, wrote about the just-completed SAP “summit” meeting, held with a tinier selection of voices this year, in what turned out to be a poorly chosen time frame.  Jon’s analysis is hard to quibble with, particularly as I wasn’t there (not invited either, not that I would have been able to make it),  and maybe Jon and I should do a podcast, but a few conclusions or predictions stick in my craw. “The next version – NetWeaver 8 (and I’m paraphrasing wildly here) – will coexist peacefully with older versions”.  Baloney.  Old and new software versions almost never get along, any more than rich yuppies in needle buildings get along with the old timers and their toy poodles.

I’ll have more to say about HANA and the BO4 platforms after I speed read through the 350 or so abstracts for the ASUG 2011 Annual Conference in my bucket, another large slug out of the 2,000+ proposals we now have to deal with by this time in January, if not sooner.

I should also write about the SCN wiki progress.  But it’s time to get to the paying job. 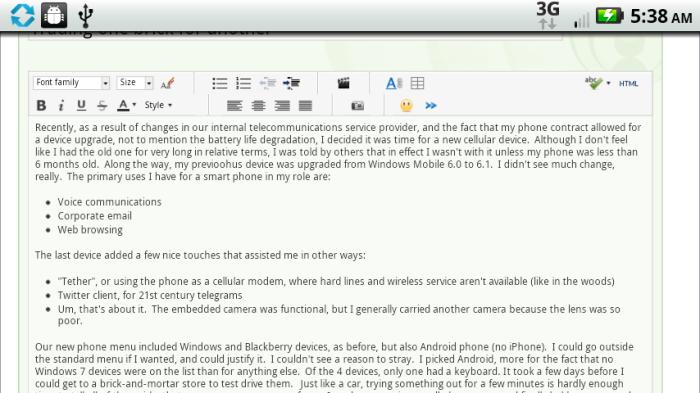 I’ll leave off with one more Mobile note, now that I’ve had my Android phone for over 2 weeks and am a self-professed expert user.  There isn’t convergency in this field, there’s competition over customer earlobes, eyeballs, and finger swipes.  I expect to see more fractionation and disparity here, not less, as 2011 rolls forward.

Oh, and SAP TechED EMEA in Spain?  Miss.  I’m planning to meet the gurus in India.

appreciate your comments and the sanity you bring to the SCN crowd. however, both old/new coexistence and mobility are here to stay and they will be disruptive to many of us.

i'm glad your Android upgrade is progressing well (did you get it on the same hardware, too?), but on my iPhone i have access to the full ECC 6.0, BI 7.0 BEx, OSS Notes and some other minor SAP stuff (workflow, anybody?).

so, as far as i'm concerned my needle is piercing through to some of those 'quaint lofts' as well.

i didn't really have to go to the summit as the $3.7B worth of twitter took me there. i also would prefer Bangalore gurus to Spain's padres as far as IT (finance) is concerned, but wouldn't complain about another Messe Berlin, either.

Jim Spath
Blog Post Author
December 16, 2010 at 3:49 pm
Greg:  I'm not sure which of us you're referring to as a bean counter, and won't take it as an insult, however (I can imagine a Sanford and Son sketch something like that).  Could I write a blog as easily, including charts, screen scrapes, and link harvesting, on my tiny screen with finger numbing pointing exercises?  Perhaps, but fortunately I have no need to try.  I blogged on my Windows phone from the woods or remote sites in the past.  When the time comes, I'll do the same with this device.

"full ECC 6.0, BI 7.0 BEx, OSS Notes and some other minor SAP stuff" - that is pretty scary.  When I think of the screen real estate occupied by the transactions I often inhabit, such as the "new and improved" database interface, that don't work at all well on a laptop at 1280x800 (my Droid 2 screen shots are 854x480), I can't imagine working productively like that.  Alerts, abbreviated highlights, perhaps some blinking lights on the phone, sure.  Beyond that, I pass.

The Android OS upgrade happened within minutes of activating my phone.  Everything else has either been me learning what it can do, or downloading a suggested application to try out.  The built-in camera, GPS, and hence Google maps and directions have been a bonus.  Otherwise, the thing hasn't done much my previous Windows OS phone didn't do, though it does have a bigger and brighter display.

I bow in your general direction.

Jim Spath
Blog Post Author
December 16, 2010 at 3:34 pm
Robbo - that almost sounded like a "dare you to get to 100 this year." 😉  I probably have 5 more topics that I could write about; whether I'll have the spare time remains to be seen.  Blag and Marilyn have conversed with me about 1, there's the leftover crumbs from TechEd, there's stuff about the wiki, and more on mobility.  That will get me to 99. Deal?  Or "just one more thing?" Jim

Clearly there are 2 peaks at SAPPHIRE and TechEd. Guess that makes perfect sense.

Seems that SAP didn't like my message that NetWeaver Mobile is dead but they haven't reached out to me in anger. I'm still hopeful that they will put out some great communications on this.

Not sure I will go to Spain either. Hmm. We have at least 2 Spain based Mentors at least.