An Introduction to Modern BI

As the first decade of a new millennium winds down, it would be prudent to pause and look back at the key events that have shaped the Business Intelligence Industry during last ten years. While it can be argued that the history of BI could be traced back to the 70’s, and would be incomplete without mentioning such pioneers as Inmon and Kimball, for the sake of brevity, we are only going to look at a more recent timeline and evaluate the efficacy of BI in improving bottom line of 21st century businesses.

A Decade defined by Economic Meltdowns

Without a doubt, the last decade could most aptly be defined as a decade of economic melt downs. First, there was the post dot com recession which wiped out billions of dollars from stock exchanges in North America (circa 2000), but whose ripple effects were nonetheless felt all over the globe. No sooner did the businesses were back on their feet, they were hit by the “Great Recession” (circa 2008) led by housing market crash, which engulfed other related industries with it and whose lingering effects could be felt to this day.

These two events combined, wiped out entire corporations from existence, bankrupted numerous institutions and caused significant financial loss to millions of individuals in terms of net personal worth. Clearly, if the cyclical nature of economic growth is unavoidable, then it is merely a matter of time before we are presented with another challenge. The question for us is then, are we going to be prepared for it? 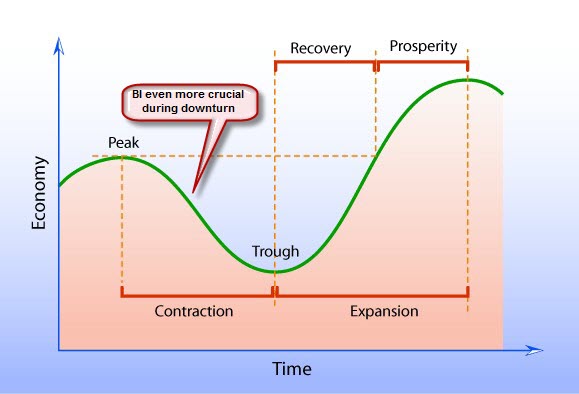 In recent history, Business Intelligence has played a pivotal role in navigating through turbulent economic times. Instead of relying on gut feeling, the strategic planning and long term vision is now guided through sophisticated data mining models. There is a better understanding and appreciation of BI analytics and dashboards in providing information on KPIs, allowing what-if analysis scenarios and an overall outlook on general health of an organization. These capabilities have provided businesses with means to not only make profitable decisions during positive growth cycles but also to prepare for unforeseen events of economic collapse or recessions (see Figure 1).

Hence, BI has indeed evolved from a nice to have capability and established itself as a must have competency for businesses to flourish in 21st century. In order to align business and technology objectives, it is no wonder then that the visionary organizations have begun to modernize their BI Competency centres or acquire on demand services to fulfill their analytical reporting needs for decision making.

Just as the customers have realized the need to acquire BI Capabilities, the major vendors in BI Industry also realized the need for consolidation of BI Platforms and Technologies. Of particular interest is the year 2007, when SAP formally acquired Business Objects, Oracle acquired Hyperion and IBM acquired Cognos. Each of these (several billion dollar) mergers had a strategic value for these vendors.

Lest we forget, it is worthwhile to mention that Microsoft also consolidated its Performance Point Server with SharePoint and offered it as part of the MOSS 2007 platform. Prior to that, Microsoft had acquired the MDX specification (written by Mosha Pasumansky at Panorama Software), which is now the industry standard for querying OLAP databases. This gives us an idea that these big four vendors in BI space must have realized the importance of consolidating BI platforms and offering their respective customers one stop shopping model for state of the art BI tools.

SAP also acquired OutlookSoft to modernize the Planning and Consolidation Suite of its BI stack. This application is now known as BPC (Business Objects Planning and Consolidation). Together with Business Objects (BO) analytical and reporting tools, SAP has provided a roadmap of its future direction. This allows SAP to have a significant advantage in terms of customer retention as well as capturing market share of its existing ERP and R/3 customers because of the pre-configured Business Content in its BW Server (see Figure 2). 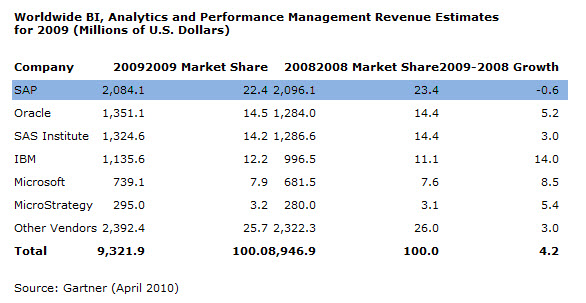 Modern Trends in BI and DW

It is also worth mentioning how the Data Warehousing and Business Intelligence have evolved over the years. We have come a long way from the days of Closed, Proprietary Architectures to Open Standards to allow for BI applications be compliant with Web 2.0 standards. There will still be “super” and “power” users, but the end user of analytics and dashboards is being more empowered. Web Intelligence (SAP Business Objects) is one such example where the end users are able to self-service analytical reports using meaningful Business Contexts. Likewise, there have been enhancements on the Data Access, Deployment, Mobility and Collaboration Fronts.

On Demand BI (SOA, On Demand and Cloud Computing Options)

The arrival of Cloud Computing has created new opportunities for the BI vendors to offer On-Demand flavour of BI tools by utilizing the Service Oriented Architecture. Already, there is an SAP Business Objects On-Demand offering as a low cost alternative to small and medium organizations (see Figure 3). However, in all likelihood, the large corporations will still need to maintain their own BI Competency centres. Nevertheless, the Software as a Service (SaaS) and SOA is another milestone in the history of BI and will most likely find its market share in the performance management and decision making applications. 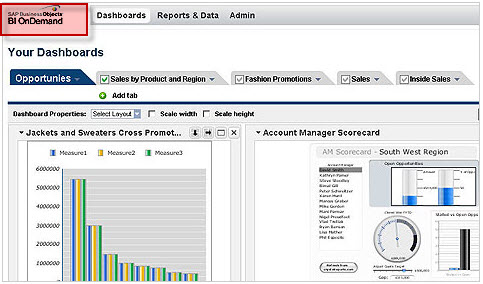 Well, the recent history of Business Intelligence has certainly been an eventful one. Now that the organizations have begun to invest in BI Systems, it remains to be seen whether the “great expectations” will materialize quickly enough to enable organizations make informed decisions in time. There is one certainty nonetheless; the BI is here to stay and influence the way businesses are run and the best run businesses using BI effectively will prevail!