Learning Content to Use With the New ABAP 7.02 Trial

With the recent release of the ABAP 7.02 trial edition, many people might be looking for good learning materials and demos to try out all the new functionality available in this release level.  In this blog I try to collect some of these sources.

One of your first stops after installing the ABAP 7.02 trial (or if you are looking for something to read during the installation process), should be the What’s New in ABAP with SAP NetWeaver 7.0 EhP2 page here on SCN. It does a nice job of summarizing the high level feature areas and give you an excellent starting point to perform further research.

There have also been several blogs released in the last week, all focused on the 7.02 ABAP topic and of the things you can try in 7.02 once you have the trial installed.

All of these provide great starting points, particularly for learning new ABAP syntax or workbench capabilities.

Although not directly SCN hosted, it’s probably important to note that the 7.02 version of help.sap.com is now live. I personally find the New Features section of the online help useful when learning the delta features.  For example if you want an overview of the new functionality in Web Dynpro ABAP in 7.02, here is the link you should start with on help.sap.com.

TechEd was also a great source of information on the new features in ABAP 7.02.  Don’t forget that many of the sessions were recorded and can be viewed at any time. These sessions can be viewed here: http://www.virtualsapteched.com/

Particularly on the topic of new features you want to learn about in this trial, you might watch the replays of CD105 – What’s New in Web Dynpro ABAP 7.01 and 7.02 and CD203 – Best Practices for Designing Web Dynpro ABAP User Interface.

If you attended TechEd this year, you might have noticed that we didn’t give out the source code to the attendees for many of the usual workshops.  This was mostly because the source code was based upon NetWeaver 7.02 and without a trial edition at that release level yet, it wouldn’t do anyone much good.  Thankfully we now have the 7.02 trial, so we have started uploading some of the code to the SAP Code Exchange.

I have created a Code Exchange project to house transports that can be imported into the 7.02 to deliver some of the demos and exercises we used at TechEd: https://cw.sdn.sap.com/cw/groups/sap-teched-2010-abap-702-examples-and-demo

Currently I have uploaded the content from CD160 – Introduction to Web Dynpro ABAP, CD105 – What’s New in Web Dynpro ABAP 7.01 and 7.02, CD203 – Best Practices for Designing Web Dynpro ABAP User Interfaces, and CD266 – Update Your ABAP Development Skills to NetWeaver 7.0 and Beyond.

If you access the Code Exchange project and go to the Releases tab (after accepting the Terms of Usage), you will see individual download files. Each contains ABAP transport files for the various areas covered.  There is a file for all the CD266 Exercises and the CD160 exercises.  There are also transports for the various demos, such as the performance demos used in CD203 or the Flash Islands and Silverlight Islands demoed in CD105.

If you need any general advice on how to import transports into the trial edition ABAP AS, I would recommend this blog: ABAP Trial Version for Newbies: Part 9 ‘ Importing a transport into SP11/12 ‘.  Its a little bit older now and focused on an early release level, but the overall process of performing transports is sound.

If you are interested in the 7.02 features for ABAP development, then (at the risk of some self promotion) I would also recommend the new SAP Press book – Next Generation ABAP Development 2nd Edition which is schedule to start shipping in early January. This new edition of the book was extended and revised specifically to cover the new features in ABAP development in NetWeaver 7.01 and 7.02. For example, the syntax all throughout the book has been updated to include the new statement chaining and extended expressions possible in NetWeaver 7.02.  There are also completely new topics like Business Objects integration, BRF+, Page Builder, Islands, etc.

The book also comes with a CD that contains the source code of all the projects discussed in the book – source code that you can now actually install and run thanks to the recent release of the 7.02 trial edition.

UPDATED: For a limited time you can use discount code 2011NGABAP2E in order to get 10% off the regular price of the book if you order directly from the SAP Press website. 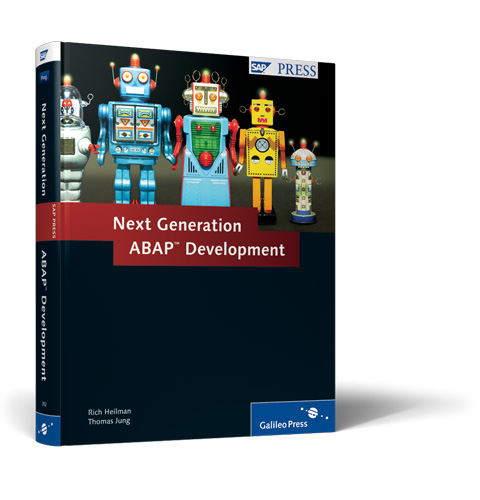 Congratulations to the cool cover with vintage tin toy robots.

Sweet update that I am sure will be super popular once it is out.

All the best, Mark.

Christian Braukmueller
December 13, 2010 at 10:04 pm
Hello Thomas,
thank you for sharing the demos and the very good sessions.
For everyone who didn't had the chance to join the sessions at TechEd:  It's highly recommendable to  watch/hear the replay and play with the examples!
(I'm curious if we can see all the Mentors inside the SAPGUI like in the TechEd-System) 🙂
Best regards
Christian

Thomas Jung
Blog Post Author
December 14, 2010 at 4:52 am
>I'm curious if we can see all the Mentors inside the SAPGUI like in the TechEd-System

Actually I didn't include the ZTECHED10_WELCOME package that contains the mentor pictures in any of the transports on CodEx. That development required an enhancement to standard SAP programs and I try to keep any such changes out of transports that go into customer systems (even sandboxes). However if anyone ever wants the mentor pictures for their system, I happy to supply it.

Peter Inotai
December 15, 2010 at 4:26 am
Hi Thomas,
Thanks for these nice collection of information regarding 7.02 news.
I'm looking forward for the 2nd edition of the book. I liked the first one, too.
It's a pity, that it's not available this year. It would have been a nice Xmas present for me 🙂
Peter

But my file size is always only "1.837.289.009 bytes".
I have tried to download the file with 3 different browsers on two different computers.
I think the "Part 2" file on the SDN server is corrupted...

Because of that i get en error during install. Please help.

Thank you very much in advance.

Thomas Jung
Blog Post Author
January 4, 2011 at 12:08 pm
I don't have anything to do with the creation of the ABAP trial itself or its hosting on SCN. This blog is only to help people to find content to support their learning 7.02 via the trial.

You should consider instead posting this question in the ABAP trial forum or using the Contact Us link on the main SCN page if you believe there is something wrong with the file download itself.

I can tell you that I know people who have downloaded the trial and successfully installed it.

Former Member
January 7, 2011 at 2:23 pm
Hallo Thomas,
Thanks once again for a nice blog and looking forward for the Book to order.

I've ordered the book today and hope to enjoy the new features next week.

Peter Inotai
January 11, 2011 at 7:35 am
It's available under the German SAPPress here:
http://www.sap-press.de/download/dateien/2447/sappress_next_generation_abap_development_2..pdf
Enjoy!
Peter

Former Member
January 12, 2011 at 7:58 am
This book has a good insight for persistent manager concept.

Peter Inotai
March 2, 2011 at 11:45 pm
Hi Thomas,
Finally I received the book. Our company had the first edition, I liked that one.
I've just received the second edition. I like the new chapters about 7.02 related topics. Now I only need time to read it and play around with the examples. This book is almost as huge as the ABAP Objects book 🙂
Peter
PS: I've just noticed that there was discount code. Too late 🙁

How do you create your code with ABAP_DEV while the rest of us are BCUSER ?-}

>How do you create your code with ABAP_DEV while the rest of us are BCUSER ?-}

I might have a system named NSP, but that doesn't mean it runs under the trial system license ... Benefits of being an SAP employee.

I tried this link from the book, but it doesn't work. Has it moved ?

how to import the transport files into the trial edition:

I really don't see that link anywhere in this blog.  The is correct in the source of the blog here on SCN:

Did you see this link in a copy of this blog on another website perhaps?

the link is from your book "Next generation ABAP development".

The link in the text itself?  Of course that can't be updated.  All the SCN URL structures changed when they migrated to the new platform last year.  Try the link I placed above.  It covers the abasics of how to import a transport.

Thanks for the Nice Blog