The Freeze At The End Of The Year

Since returning from SAP TechEd in Germany, I’ve put my nose to the grindstone on a number of projects, inside the office and out.  Most I can’t talk about for business reasons; others either I don’t think are interesting, or I’m at a loss for interesting ways to describe them.  Here are several areas I can talk about.

I posted a question about a month ago, concerning business processing of credit records.  Apparently an SAP system can get out of whack, and you need to run suggested code to get level again.  Since it requires a quiet time (it locks sales order entry, for Pete’s sake), that’s less and less feasible as the user base grows globally.

No one responded with an “ah ha” answer (yet), and I’ve also posted the same question on the ASUG forums.  When I looked at the code, I discovered that there are several enqueue calls, none of which have exit code checks.  When I learned to program computers, I was taught to verify what subroutines did.  Maybe the writers of that SAP code skipped that class?

I also got a heads up about legacy coding decisions affecting calendars at the end of this year, way before the Mayans hit.  If you run SAP, you need to read this note:

Other activities I’ve been involved include discussions about the SCN recognition process (see Active Contributor Status: A 12-month rolling period), moderating blogs and the Sustainability & CSR, attending SAP Mentor webcasts, and a spot of work on the wiki.  The last one can be a real time sucker, with little to show for the efforts.  Removal of dead end pages, random questions with no answers (because they are unanswerable since they are on the wiki, not in the forums), and turgid prose masquerading as helpful advice (“Customer relationships are seen as a strategic asset.” DUH!).

I have not written about the most recent wiki sites upgrade.  It’s on my list.  If you have comments, good or bad, let me know so I can shape my tale better.

The call for speakers for the 2011 Annual Conference ends, like, tomorrow, and I’m behind the eight ball to finish a collaborative topic I want to share about virtualization, plus audit the content previously submitted.  The process this year is different yet again.  Please send in a topic!  We may extend the deadline, or we may not.

There’s more stuff going on, SIGs realigning and reinvigorating, a meeting of volunteers in Chicago in January, plus we’re planning a holiday meet-up of several of my BITI team peers.  Shrewsbury may never be the same.

On December 7th, I was the host of a webcast where Rui Nogueira talked about the SAP code exchange, including the recent change in terms of use.  The slides are on the ASUG site, and the recording should be there soon.  A podcast I did with Rui is on ASUG, and on SCN. See: Code Exchange? Is that like the stock exchange for programs?

As mentioned above, it’s year end freeze time, with change control extra rigid to prevent abnormal risks to holiday retail season and fiscal calendar closing.  I work with the enterprise scheduling team, and the workload is sometimes scarey.  It all looks so easy on the TV commercials.

I’m also supporting efforts for our continued merger integration, as we decide which assets to keep, what to move and what to change. If my topic is accepted to the ASUG Annual Conference, I can talk about sizing and performance tuning on the merry-go-round in May 2011.

In March 2011, I’ll be in Australia for the first time, at the Mastering SAP conference.  As I proposed several ideas, now I need to shape them into hour-long coherent conversations.  Expect to hear more as I lay out the tarot decks, I mean slide decks.

After a great summer camp in July, our troop had a few changes, with boys moving away, and others joining the group.  We have a couple more successful camping trips, including a pretty cold one last weekend.  I’m spening time getting their advancement records updated, so they can be recognized for their efforts.  It’s like the SCN recognition system, though I’d venture to say that “Eagle Scout” means more on a a resume than does SCN level.  Especially when those points don’t bleed through to LinkedIn.  But let’s not go there.

On a different plane, I’m working with Scouting’s Honor Society, the Order of the Arrow, and in 2011 will be administering our member database.  The outgoing lodge adult leader was happy to hear I “know SQL”, though what I learned with SAP ERP systems needs to be unlearned when working on a smaller scale, especially when we’re talking about personal relationships and accomplishments, not sales of widgets.

I recently completed the fourth “reenactment” of historic Baltimore City hiking trails.  You can find the links to blogs (look for Crumbs From The Spork) on my SCN wiki profile page.  I think.  My next challenge will be the North Point trail, the route the British tried to take in 1814, over land, while Francis Scott Key was help captive on the sea by the British Navy.  At least, that’s our story.

To prepare for the next-to-last-half Harry Potter movie, I re-read volume 7, and am re-watching the first 6 movies.  But I keep getting distracted and have not been yet.  Soon.  Maybe.  Other priorities.

I also wrote up a “Top 10” movie list for 2010, after seeing Blag mention he was going to blog about his top 10 SCN blog picks.  Mine were easier choices, though, and the movies won’t talk back to me.  See:

And, a picture, so this tale isn’t totally dry. 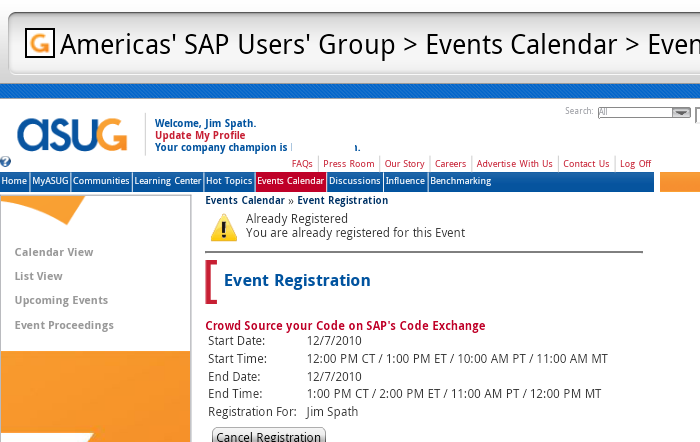 Oh look, I’m blogging on my new Android phone.  I should talk about that.  Maybe?

Tammy Powlas
December 8, 2010 at 2:27 pm
just as 2011 annual conference is winding up!  Thanks for the excellent post, and I look forward to Shrewsbury...Cracker Barrel and all that.
Tammy