The data of your infocube might be lost If you add new characteristics and dimensions, after upgrading the release of BW (3.x to 7.x), after a system copy or just simply executing the report RSDG_CUBE_ACTIVATE without applying the last version of note 1444514. The correction of this note is delivered incompletely with Support Packages SAPKW70024, and SAPKW70107

II. – How to detect this loss data: 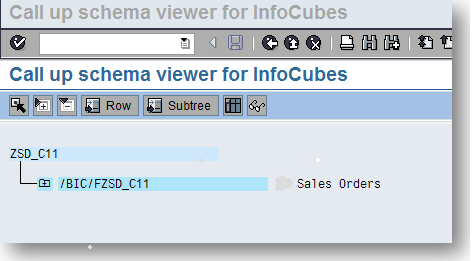 2.1. Empty infocube: Generally after executing the above report, the cube does not have data in fact table however you can see the requests into tab “Content” in Manage infocube.

2.2. Partially loaded: After executing the above report, the new requests are saved into the fact table and these are displayed into tab “Content” in Manage infocube.

Like this example, it has only 5.220 entries and it looks to have a few entries.

Display the number of requests for this infocube by using the table RSICCONT which contains all loaded requests into the cube->680 requests… it is very clear that it has many requests and it should have more entries than the records in fact table.

To confirm that the entries into infocube are higher than in facttable, goto RSA1 – Modeling – Infoprovider, find the cube i.e. 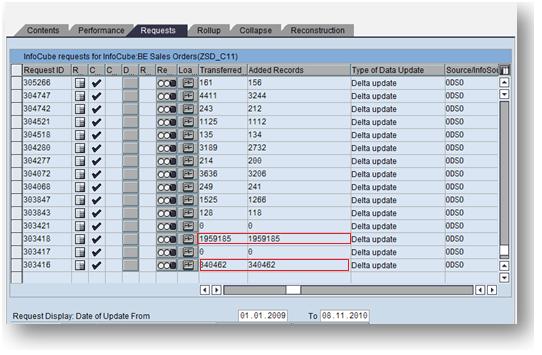 As you can notice only the two outlined items has more than 2 million of records.

III. – How to know if the report was executed RSDG_CUBE_ACTIVATE:

Go to tx.code SM37 and find Job name with RSDG_CUBE_ACTIVATE.

1. – Restore your lost data on your BW system, because the note 1444514 will not correct the current situation but rather, prevent it from happening in the future.

In order to see Hot news you have to access: service.sap.com/notes and customize it      to your BW version and service package level.

As a hint, in case you are using BW 7.0 with EHP1, I would recommend you to create two filters. One for your current package and additional one for its corresponding release in 7.0, and take both in consideration.

Additionally, if any prior version of this note was implemented, you must now implement the latest version to avoid the error.

The correction of this note is delivered incompletely with Support Packages SAPKW70024, and SAPKW70107. As a result, there is the risk of data loss when using the RSDG_CUBE_ACTIVATE program. For the above mentioned support packages, this note must be considered as HotNews.

Additionally, if any prior version of this note was implemented, you must now implement the latest version to avoid the error.

When a cube in a source system contains no data, a user can set the Line Item flag to TRUE for a particular dimension. If the user then decides to transport this into a target system in which the target cube DOES contain data, the dimension table is dropped and recreated. As a result,

DIMIDs in the Fact table now point to invalid entries in the new Line Item dimension. This change should NOT be permitted and the cube activation should be aborted instead.

For more information like corrections about this note, refer to last version of note 1444514 directly.