Several SAP customers have standardized on TOGAF and often times the customers pose a question, “what is the relationship between TOGAF and SAP EAF”.   Also they would like to understand how they can leverage SAP EAF to address any gaps during the development of their Enterprise Architecture by applying TOGAF.

This blog is first in the two part series to provide an answer to those commonly asked questions.  In this part, the focus is on clarifying the relationship between the two frameworks at a very high level.  In the next part, I will discuss how customers can leverage SAP EAF more effectively.

First and foremost TOGAF and SAP EAF are complementary to each other.  SAP EAF has been developed by building upon the foundation of TOGAF 8.1 and by introducing several extensions.  By the time TOGAF 9.0 was commissioned to be developed by The Open Group SAP had become a member of Open Group.  Hence the content of TOGAF 9.0 was enriched by drawing upon “notable” to “significant” contributions from SAP.  It is important to note that several elements of SAP EAF content were included in TOGAF 9.0.

Thus the relationship between the two frameworks can be described in a nutshell as follows: TOGAF 8.1 served as the foundational source for SAP EAF and subsequently SAP EAF served as one of the key sources for TOGAF 9.0 content. 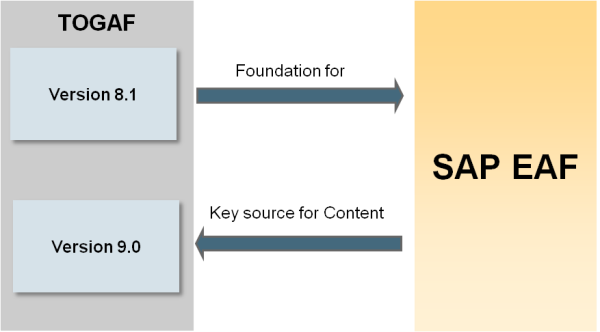 TOGAF has several characteristics namely open standard based, vendor, solution, technology and industry agnostic, is offered with no license fee and supports several types of architectures.  Several enterprises have benefited from adopting TOGAF. But TOGAF had a couple of significant gaps namely, it was not most appropriate for applying to enterprises that has a significant footprint of packaged software (such as SAP) and did not address Services Oriented Architecture. Also TOGAF 8.1 mentioned that “The ADM is a generic method for architecture development, which is designed to deal with most system and organizational requirements. However, it will often be necessary to modify or extend the ADM, to suit specific needs”.

TOGAF, being an agnostic framework, is by design left generic and therefore a significant effort is required to apply the framework.  TOGAF did not define all the terms explicitly leading to different interpretations by the practitioners.   Also TOGAF 8.1, prescribed what outputs are needed in each phase of ADM without either offering guidance on how the outputs need to be produced or providing concrete example of those outputs.  It took a seasoned practitioner to apply the framework to develop the Enterprise Architecture.   Hence, SAP EAF was developed within this context and by applying a set of first guiding Principles as described in the next section.

Based on customer and analyst input, during the second half of 2006, SAP launched the development SAP EAF exclusively to be an extension of TOGAF and designed to support the effective adoption of packaged software in a services oriented enterprise. While developing EAF, SAP applied the following two overarching principles namely (a) assume TOGAF is correct, adopt content directly and extend where necessary (b) do not re-invent the wheel by developing a framework from scratch.

In remaining true to those Principles, EAF retained all of TOGAF’s key terminology as-is enabling SAP experts communicate with TOGAF practitioners easily and effectively. SAP included several extensions to TOGAF within EAF and those extensions are highlighted below.

Open Group introduced several changes to TOGAF 9.0 including the following

Contributions from SAP towards the development of TOGAF 9.0 are highlighted below organized by the Part the content was added to. 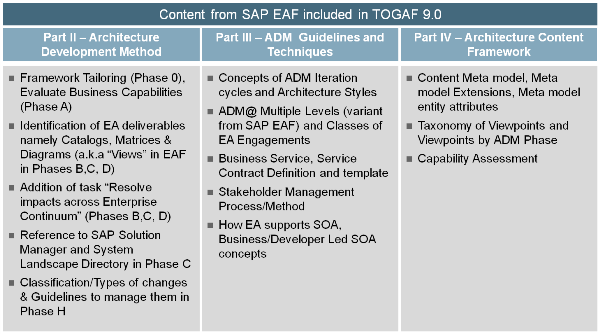 Introduction of SAP EAF is a cornerstone of SAP’s Global Enterprise Architecture Program. The EA framework offers a structured methodology and the EA program has served as one of many ways for SAP to make successful inroads into supporting and realizing our customer’s business strategy into actionable roadmaps/plans.  In conclusion, both SAP and Open Group have mutually benefited. SAP has benefited from TOGAF by utilizing it as a solid foundation to build its own EAF. Similarly, SAP has made significant contribution to the Open Group by way of offering content to enrich TOGAF 9.0.

Former Member
April 15, 2011 at 3:20 am
I had a great doubt why contents of TOGAF 9 are available in SAP EAF. This blog clear it. TOGAF 9 is the extended version of SAP EAF 🙂

Like TOGAF,SAP launching SAP EAF wiki? If you are aware of it, please let me know.

What is the basic skills required for SAP Enterprise Architect.