No support for letters in SAP CRM Campaign Management – SAP bring it back!

The channel letter is back! Check out the Note 1573981 – A channel is missing in EHP1. There are correction instructions for CRM 7.0 and 7.0 EhP1. It was hard work to get SAP there and I’m still fighting some problem that I have with the SmartForms.

In the moment I’m managing the upgrade project from SAP CRM 5.0 using PC-UI to SAP CRM 7.0 with the CRM WebUI. We support our sales and marketing department with this CRM Processes:

We have a CRM 7.0 including the Support Package Stack 6 running as a Sandbox System. Here I’m checking if all the current business processes are still supported.

10 days ago I’ve discovered that SAP had stopped to support the channel letter in CRM 2007 (6.0). I’ve raised the SAP Support Message 881232/2010 to get a clarification. Unfortunately my observations where proved right. There is no support for the channel letter anymore.

Since our CRM 4.0 implementation 5 years ago we do also use the Campaign Management. It allows the channel mail (printed letter) where a Mail Form generated in the SAP GUI transaction CRMD_EMAIL could be inserted. We used this possibility to send out a letter with a complimentary ticket for the light + building trade fair. The next image visualizes the campaign automation that we setup to do this: 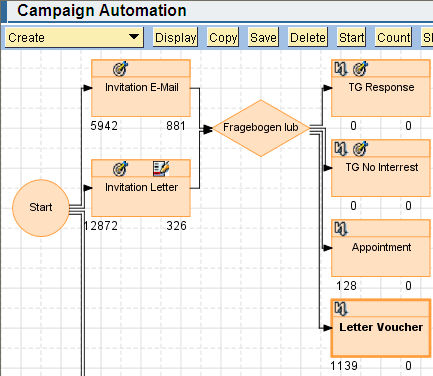 When the Campaign is started we’ve sent out 5942 E-Mails and 12872 Letters. The E-Mails contained a personalized link that pointed to the survey. If our customer flagged the checkbox “Send me a complimentary ticket” then the process “Letter Voucher” was triggered and in total 1139 letters where printed in our advertising material warehouse. The person working there had only to pickup the letter from the printer, get the ticket and put that into an envelope.

This was possible by specefying the Campaing Element “Letter Voucher” with the Communicaiton Medium “Mail with activity creation”, the Mail Form Letter and a Print Profile as you can see in the next screen shot:

This process was triggered by the Survey that was evaluated according to the following rules: 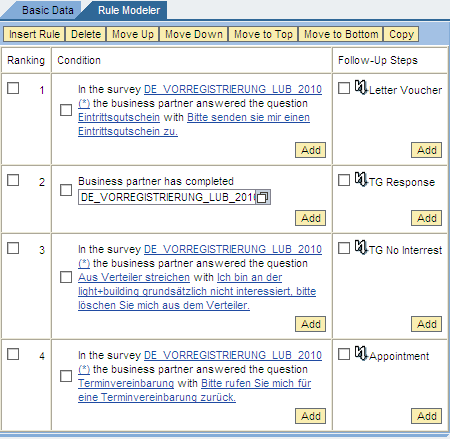 According to the Upgrade Master Guide SAP CRM 7.0 SR1 (Page 38) SAP CRM has now the following restriction: “Letter is no longer supported as a direct channel; sending letters should be performed via export channel.”

With that our campaign automation process which is successfully used since 5 years will fail when we execute our planned SAP CRM 7.0 upgrade! The provided workaround isn’t a real alternative. The suggestion is to use the export channel. So I had to:

That would lead to a much higher manual, costly, error prone process.

As it seems that the SMARTFORMS based functionality can’t be used anymore due to architectural changes SAP had to provide a replacement solution based on Adobe Forms.

I need your help

Do you have implemented similar processes using the channel letter? Make SAP aware of that and vote for the Idea I’ve created on SAP Idea Place: Bring back channel letter (print) in Campaign Management for CRM 7.0. Unfortunately the Idea there looks bad due to problems with the editor.

Former Member
January 7, 2011 at 2:36 am
Hi Gregor,
I was looking for "how to use letters in campaign mgmt" and ran into your blog. I agree with the fact that it is a shame that the channel "letters" is not suppotred anymore. Using the export (open channel) function is an alternative, but is devious and not error free. The use of a webservice could be an option to fill the word templates...
Best regards,

unfortunately the WebService to fill Word Template is not really a solution. It will still require a frontend PC and user interaction/automation to do the printing in Word. I hope to get back the Smartforms based solution or a Adobe Forms replacement which can be used also in background processing.

Thanks a lot for this blog. As a consultant I opened 3 different OSS messages about this (for 3 different customers) thinking that someone at SAP would finally come up with a decent solution... But I ended up using the export to file scenario together with a custom report to print the desired smartforms.

Which is definitely less paintful than implementing the full export to channel fonctionnality, but has a huge disadvantage: we cannot use export to file as secondary communication method in a communication medium... So we had to use campaign automation as a workaround (emails are sent in a first wave, and then export to file is used to contact the BP that were not contacted in the first place).

thank you for commenting on my Blog. I wasn't aware that I haven't updated it with the latest information. The channel letter is back. Check out the Note 1573981 - A channel is missing in EHP1. There are correction instructions for CRM 7.0 and 7.0 EhP1. It was hard work to get SAP there and I'm still fighting some problem that I have with the Smartforms.

Nicolas Busson
August 8, 2011 at 10:21 am
THANK YOU !!!
I ordered the latest OKP but couldn't find any information about it. Also I double check the release notes on a regular basis, but it seems to be too fresh piece of information... So I wouldn't have found it whithout your help.

Thank you so much for sharing this trick with us.
Take care,
Nicolas.

thanks for your "lobbying". I'm on the verge of using this feature and I was very desappointed to explain to my french users that their former 5e/months crm could do what SAP crm couldn't! 🙂

Going through the .csv export file wasn't an option for my users

thanks for this descriptions. Do you know if this function is also available for CRM 7.0 EHP 2?

I also contacted SAP Support to get a note for this release, if I get an answer I will write here again.

I hoped that the notes 1573981 and 1587963 where already up-ported. But there were not. So please push SAP via an Support Message to do that. And please ask also to include it directly in EhP 3.

I recently opened an OSS message concerning this topic, because I tried to implement the notes and it did not work. SAP told me, that the notes you mentioned were released by accident and should not be used. A colleague of mine made a test in an EhP 2 system but there the notes could not be implemented as well.

So now I am a bit confused - does SAP support the letter again or not. Should I answer the SAP Support again? Whats your experience with that?

I know this blogpost is quite old, but as I'm facing the exact same problem each time I need to implement marketing processes on a project, I opened a new customer message again hoping for a happy end. Here is the answer:

This communication channel was downgraded since CRM5.1. It was enabled by mistake by development, but later on was removed. You cannot enable it once again. Please refer to Note 1338221 for details.

Letter communication method was removed, and file export / open channel is the option. Communication medium Letter is no longer available.

Solution Management is already aware of this issue. This is the final

say regarding your query. [...] there is no plan to develop Letter communication channel in EhP4.

Thank you and kind regards,

IMHO that's incredible. But that's the way it is.

the good thing is that SAP doesn't seem to know what SAP knows :-).

Yeah... I know: that's the first thing I told SAP when opening this (umpteenth) message. But this note cannot be implemented in CRM7.02 upward, and no support will be provided. In case you would like to get more details about my conversation with both Support & Solution Management, I converted the whole discussion into a PDF file that is available here:

Even SAP sales rep. whom I'm working with on 2 requests for proposals couldn't believe it. Now they are looking for an older system from which I could copy/paste the missing pieces of code...