Before Export Check
I do not know how you organize your BW development team to collect their changes on transport requests. SAP recommends to always use the transport collector in transaction RSOR, but for organizational reasons, this might sometimes not be applicable. However it is, you probably know the situation, that you get errors in the import post processing when importing a transport request to a BW target system. Usually, the error is caused by some missing objects, e.g. an InfoObject is missing for an InfoCube. If you are developing BW content, this problem of inconsistent transports is even more complicated, because you will see the error not before the content is installed. Now this problem is tackled already at the root: The releasing of the task or transport request will start a check of the BW objects contained on the task or request. The following conditions are checked:

In case one of the conditions is not fullfilled, you will see a popup like the following: 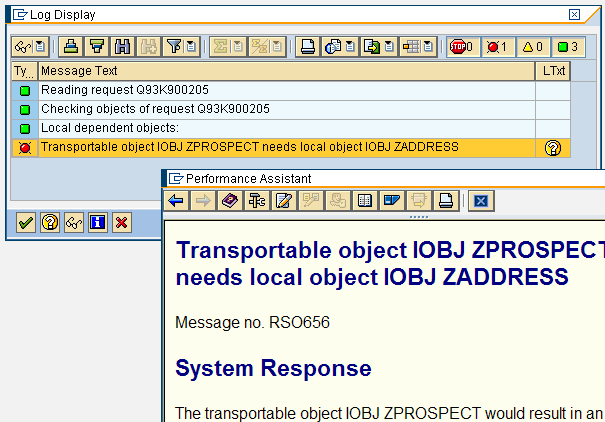 On above popup, you can press the red cross (abort), which will stop to release the request, and is recommended, but you may also press the green check, which will give you one more warning that the request contains errors. If you confirm it, the request is released despite of the errors.

If the popup contains only warnings, you also may press the red cross or the green check, in latter case the request is released without additional warning. A little surprisingly for those of you, who know the performance of RSOR, this Before Export Check is quite fast, so there should be no need to switch it off, which is – nevertheless – possible,  both in general and for a particular request or for particular objects on a particular request.

Here, before BW release 7.00, only one “Target source system” per “Original source system” could be entered. Since BW release 7.00, for the mentioned 7.x objects more than one target can be entered per original and the 7.x objects are imported several times even though they were exported only once. The additional targets are flagged with the “7.0” flag in the view. The InfoPackage, being a 3.x object, is missing in above list of objects, even though it is still relevant in a pure 7.x data flow as well. But finally, with release 7.30, this gap is closed: Also InfoPackages count as 7.x objects in V_RSLOGSYSMAP and can be distributed to several source systems in the BW target system.

Now, nice concept, but you might have figured, that you need to duplicate the whole data flow onto the Dummy Source System just in order to change one little property like the scheduling options. And creating BW objects is such a lot of work! But behold – there is a solution for this also in BW 7.30: The DataFlow Copy Wizard. But this shall be covered in another blog.

Ah, and by the way, you can reach the creation of dummy source systems by right-clicking on the header line of the source system tree:

Jason Muzzy
July 6, 2011 at 11:11 am
The before export check is one of the features I am most looking forward to.  Hopefully it works for query elements, routines, etc.!