Zen and the Art of Community 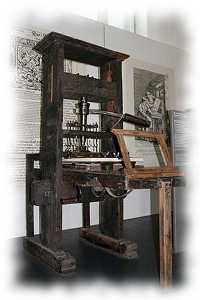 The printing press, developed in the 19th century, ushered in a new era in the distribution and dissemination of information. People were able to obtain larger amounts of information more easily, as compared with before. It was primarily academics and wealthy individuals that were able to take advantage of this however, because books themselves were still not affordable for the average worker.
In the mid-20th century, the world experienced a boom in technological advancement, efficiencies of operation, and increased productivity due to the free (conceptually) sharing of information by computers and other means. The precursor to the Internet, called ARPAnet at the time, brought forth two primary tools – email and file transfer – both of which were designed for sharing information more quickly and easily. 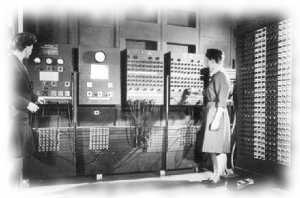 We now refer to this, in retrospect, as the Information Age. And this represented an amazing shift in the ability of the organization and the individual to advance their own knowledge and capacity. The actual process of sharing that information however was not free (monetarily). To take advantage of this transfer of information, you had to have access to the tools by which information was shared. Computers, in these early days, were assisting in the spread of information, but only large companies and academic institutions could afford them or knew how to run them. It was beyond the reach of the average individual unless they were employed by, or studying at, one of these establishments.
Today, for your average worker, the barriers to access to information are all but gone. Information can be obtained from virtually any readily obtainable device – traditional means like colleges and books still exist and are very affordable on average wages, but now electronic books, webpages accessible from computers and mobile devices, even information being pushed in the form of social media outlets like Twitter and Facebook, make it immensely easy to partake of the wealth of information. Everyone, it seems, has access to the Internet. 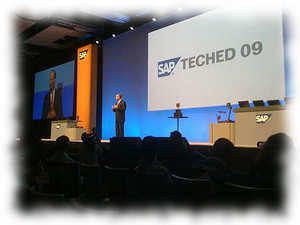 So information is more easily accessible, and that’s a positive change, but information alone does not make one successful. The real groundbreaking improvement in recent years is in the access to expertise to help you interpret and derive value from that information. Nowhere is this more visible than conferences like SAP TechEd where you can listen to sessions from experts, authors and developers, and then ask them questions directly about their material. Most of them will make their contact information available for follow-up. Many of them have even dedicated time in the networking lounge for no other purpose than to take questions and provide answers to those in need.
This is what I like to refer to as the Information Sharing Age. Access to Information makes things possible, but to derive optimal value from information requires the ability to understand and comprehend it, and with the culture of sharing thanks to the advent of social collaboration tools, those that need the information can get it directly from those that have it.
So what is the enabler of this information sharing? It’s not the tools themselves that provide or derive the value, but the users of the tools… the Community. 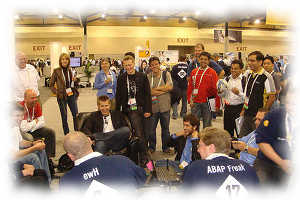 Community, regardless the tools it employs, enables more rapid access to information and expertise. It encourages information sharing, and all community members derive benefit from it, and can do so more quickly and efficiently than ever before!
So why am I writing about this now? I am motivated primarily by my experiences at the SAP TechEd conference in Las Vegas last week, where I like to think, relative to community and information sharing, I practiced what I’ve preached, so to speak. The most obvious ways are the sessions I led, but I’d rather focus on two other instances.
The preaching:
I was honored to be invited by Gail Moody-Byrd to participate in an SAP customer panel on the value of Community. Mark Yolton was the moderator, and I was on the panel with such distinguished community mentors and members as Tammy Powlas of Fairfax Water, Karin Tillotson of Valero Energy, Greg Myers of SEI and Derek Loranca of Aetna. I won’t go into too much detail about this panel as others have blogged on it already, but suffice it to say that all of these visionary technologists understand first-hand and can communicate the value and importance of community involvement.
Not only is this understood, but it is integrated into their daily lives, being SAP Mentors, ASUG Volunteers, and in other areas generally available and willing to help others by sharing the experiences they have gained over the years so that others will not have to endure the same trials and errors, but rather can learn from their toils. I felt honored to be in the presence of those that are the epitome of the Community ideal.
The practicing:
Additionally, I was privileged to be invited by Jon Reed, SAP Mentor and head of JonERP.com to participate in a Video Blog: SAP Solution Manager Reactions/Preview Live From TechED Las Vegas on the current and future state of SAP Solution Manager – something that was high on my priority list to address while at TechEd. This, to me, was a great way to actually participate in the execution of the community concept itself.
I was joined by Tony de Thomasis, SAP Mentor and independent Solution Manager consultant from Acclimation in Australia, as well as Marc Thier, SVP of Application Lifecycle Management from SAP, and of course our host, Jon Reed. I was gladthat I was able not only to share some of my feelings and experiences on Solution Manager, but I was able to learn much from these experts as well.
Overall, after attending the SAP TechEd conference off and on for the last 14 years or so, I can honestly say that this was the best one yet. There are a few reasons for this, the first and foremost being the fact that, for the first time, I was fully engaged in the conference, not simply taking it all in, but giving as much as I could as well. I was able to share a little bit of my learnings to help others, and I also got an immense amount of information, along with guidance from the experts to help me and my company gain benefit from that information.
And lastly, and most importantly, I made contacts that may help me and my company become more effective at managing our SAP applications for many years down the road.
I hope that many of you were able to take advantage of the opportunity to attend TechEd as well, or will in the upcoming Bangalore or Shanghai events, and encourage you to not only attend, but to fully participate, in the future. And if you can’t attend a conference, then participate here, in the SAP Community Network. But by all means, one way or another, join in.
The Community depends on it!
And just to wrap up this blog, I’ll add the following quote from my company’s founder, which seems quite appropriate, even 44 years after his death:
“Our heritage and ideals, our code and standards – the things we live by and teach our children – are preserved or diminished by how freely we exchange ideas and feelings.”
— Walt Disney
Alerting is not available for unauthorized users

I agree with you that get a lot more from the community by giving back; it makes the experience that much more rewarding.

I am amazed you found time to play the guitar - my TechED time was packed - it all just flew by.

Susan Keohan
October 30, 2010 at 3:28 am
David,
Excellent blog - and hat tip to you.  As you know, ASUG volunteers and passionate SCN community members have a lot in common, and you have captured one of the best reasons for that passion here: that by sharing our knowledge - we also enrich ourselves.

Well worth waiting for 🙂
Cheers,
Sue

Sylvia Santelli
November 1, 2010 at 10:09 am
Walt Disney quote is the perfect closer.
Thank you for sharing this with the community.

Marilyn Pratt
November 2, 2010 at 6:17 am
Loved meeting the man behind the fabulous mouse twitter avatar @sapdba.
I really enjoyed this blog and thought about what the democratization of knowledge does historically and even here: on SCN.
I would also like to add a thought to your founder's quote. Beyond preserving what we have as a heritage of knowing (or sheltering it from being diminished) I believe the more we give and share and teach and learn from others(our children included) the wider our own horizens grow and the more our world expands.
To think that "best TechEd in 14 years" is the outcome of selfless and engaged giving, sharing, active participation, makes this community advocate's heart soar.  Thanks for communicating these thoughts.  They seem to resonate with many of us.

Former Member
Blog Post Author
November 2, 2010 at 8:19 am
Thanks everyone for the positive comments! And @Marilyn, regarding your comment about our world expanding when we share, I couldn't have said it better myself! Thanks for that! 🙂

Former Member
December 13, 2010 at 12:12 pm
Hi David
I have not yet read your blog, however I got lost with the date of printing press invention. I could confirm at wikipedia that it was invented many years before 19th century.
As a matter of fact: "By 1500, printing presses in operation throughout Western Europe had already produced more than twenty million volumes"

Marilyn Pratt
December 14, 2010 at 6:52 am
I can confirm that as well having been lucky enough to actually hold in my hand an addition of the Gutenberg book of Ester.  Moveable Type circa 1455. But we are all wrong about first according to Wikipedia: "The world's first known movable-type system for printing was created in China around 1040 AD by Bi Sheng (990–1051) during the Song Dynasty".  The printing press in this post comes from Germany in 1811 (again according to Wikipedia): Printing Press

Former Member
Blog Post Author
December 27, 2010 at 4:41 am
Sorry, yes, that was a typographical error on my part. I mixed up the date with the date of the picture I was looking at.

I hope this simple error didn't prevent you from getting past the first sentence of the blog.