While the Geeks Are Away, The Suits Can Still Play

With TechEd Las Vegas going on this week, a number of IT folks are out of the office, but that doesn’t mean that you can’t make any necessary changes to your planning or consolidation application, that is, so long as you’re using SAP BusinessObjects Planning and Consolidation (“BPC”).  SAP bills BPC as “A unified planning, budgeting, and consolidation application that is designed to be owned and managed by business users” and for the most part, I’ve found that to hold true, especially compared to our previous planning application SEM-BPS.

As a former business guy (I’m a CPA who’s somehow found a home in IT, but that’s a blog post for another time) and one of the key members of our company’s BPC implementation team, I find BPC to be an easy application to work with.  It helps that the primary facing tool used by the application is Microsoft Excel, something that most business users hold near and dear to their hearts.  Creating simple input templates and reports is a breeze after spending a couple hours in a training session to learn the ropes (may not be quite so brief if you want to write more complicated input templates and reports).

If you’re a business person who’s squeamish about writing your own input templates or reports, BPC is delivered with some out of the box templates that can be utilized.   I’ve yet to extensively use these delivered schedules myself, given that my company’s on a slightly older version (7.0 for Microsoft) and the schedules delivered with this version don’t utilize the newer EVDRE function; however, EVDRE input templates and reports are available in version 7.5 (both Microsoft and Netweaver) and I’m sure that you would find them useful. 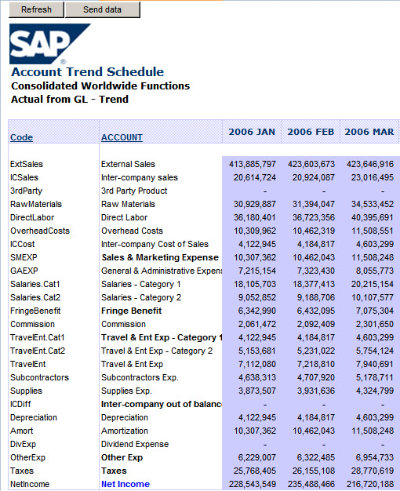 Whether you build your own input templates and reports or you utilize the ones out-of-the-box, BPC allows you to harness the power of Excel and use it as a front-end to store your planning and consolidation data in a database.  By storing the data in a database, you no longer have to email Excel files back and forth or store them on some sort of shared drive; everyone with access to BPC can simply login and get the most current data.  I like to think that there’s nothing that I can’t accomplish in Excel and BPC doesn’t prohibit me from doing anything that I’m used to doing in Excel.

An advantage that I’ve found in BPC is being able to re-use Excel files that have been used historically by our business users to generate their budgets.  We’ve got a couple of ‘models’ that our business users have built/tweaked/improved over a number of years and they didn’t really want that hard work to be lost upon moving to a new planning system.  By wrapping BPC functionality around these previously existing models, we were able to keep the functionality of the models exactly the same, but still enable them to interact with the BPC database.

When it comes to making changes to dimensions and applications in BPC (think ways you want to slide/dice or otherwise report on or input your data), the Admin Console is very intuitive and easy to understand, which also lends itself well to being maintained by a business user.  Changes to security are also made in the Admin Console, which means that you no longer have to wait for IT to grant security to new users or make changes for existing ones – which is really nice for those crunch times where a lack of access can come back to bite you. 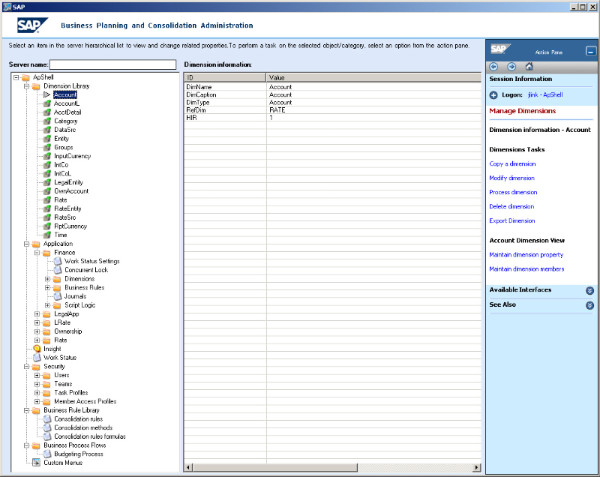 In the above screenshot, you’ll notice the Action Pane on the right hand side of the screen – this is a context sensitive menu which guides both users and administrators through BPC (in both Excel and Admin Console), and is really the key piece of functionality that makes it straightforward, allowing business users to ‘own and manage’ the application.  The Action Pane intuitively knows where you are in the system and provides you with a series of options, tasks or activities that are available given where you are.

While I’ve been hyping the ability for business users to ‘own’ the application, I don’t advocate zero involvement from IT when it comes to BPC – there are certain technical aspects that definitely lend themselves to getting IT involved, such as moving data to/from BPC and other systems or writing script logic (or other logic) to help manipulate data behind the scenes, just to name a few.  But, once these back-end processes are set up by IT, the tasks themselves are able to be executed by the business user, allowing optimal control of planning and consolidation processes.

A prime example, and one that’s used in most BPC Administrator training courses, is the ability to ‘seed’ a budget by copying actual balances from the current year to the budget year.  Executing what’s called a Data Manager package allows this to be accomplished with ease – simply fill out the intuitive parameter selection screen and let it fly.  The data is copied into the budget year and is ready to be updated via the input templates that are available. 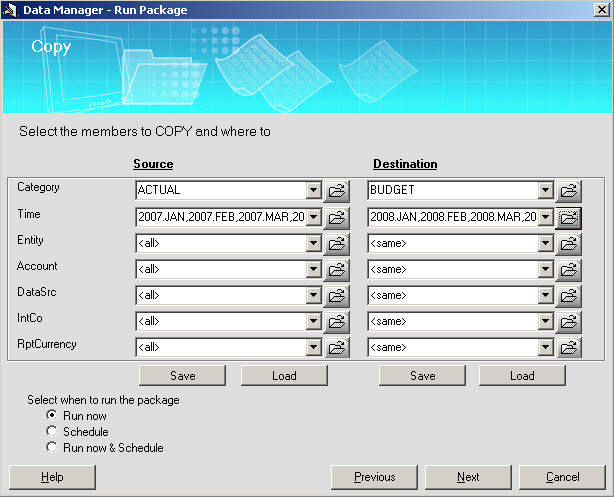 You could always elect to leave some (or all) of the administration of BPC within your IT department (like we have at my company) – just don’t expect your IT folks to be available to make changes this week while they’re off learning at TechEd. 🙂