My Bucket List finally came full circle in Berlin, when I attended SAP TechEd 2010. I met almost everyone who I had wanted to meet and had a lot of fun during the 6 days I was there and of course TechEd more than satiated my thirst for SAP Technology. So much so that I am eagarly looking forward to SAP TechEd in Bangalore on the 1st – 3rd of December.

But let’s begin from the beginning, shall we ? 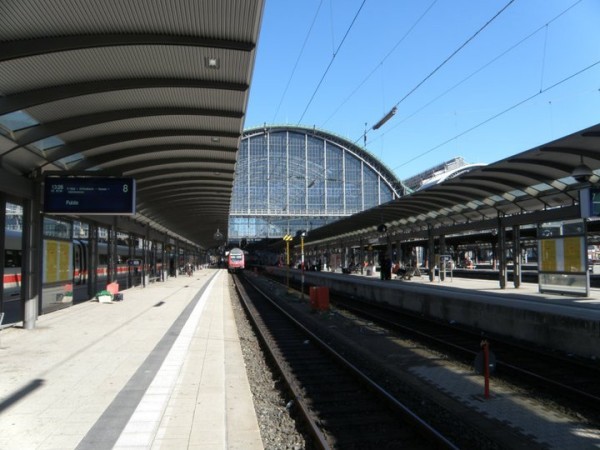 I landed in Frankfurt Airport on the 9th of October, at around 9:00 AM. It was a good 6 hour wait before I boarded the cluetrain. Therefore, long story short : train ride to the Frankfurt HauptBahnhof, breakfast, met up with Fred Verheul and finally boarded the train  only to find out that that Mark Finnern was aboard too (with some fabulous home made Linzer Torte) though in the First Class 🙁 (Though he spent most of his time with us). The next few hours flew by, sorta happens when friends gather together after a long time. Craig Cmehil, Rui Nogueira, Jim Spath, Gregor Wolf and I were also accompanied by Andy Singleton (CEO of Assembla) and we had a ball of a time, geeking out on the cool things Gregor was doing with Selenium and generally picking on each other. No one was spared 😉 It was brilliant and in the end I just did not want to get off the train. I hope I get to do it again ! 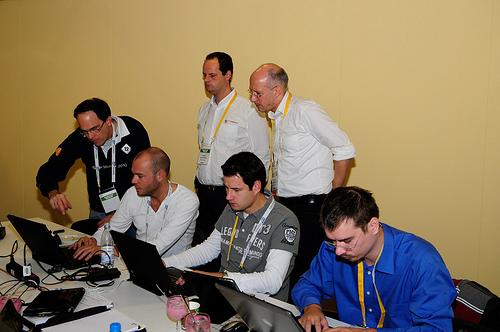 Give a geek some beers ( and Jaeger ) and a problem to solve with code and he’s the happiest person on earth. And doing it with friends is just the icing on the cake.

Innovation weekend was just that. I got introduced to quite a few technologies, Sybase Mobile was something that I was interested in as well as BusinessObjects and I got a good overview of what to expect from each of them. Then the business cases were discussed and we got down to hacking. We had an awesome team : Richard Hirsch, Twan van dem Broek, Casper Bellemans, Christian Braukmüller, Oliver Kohl, Matthias Steiner, Otto Gold, Jochen Saterdag and others. For the next 30 hours with little sleep while we toiled to get a solution up and running, we networked, got to know each other and forged friendships that will go a long way. In the end we could not get a working demo up and running, mainly because of problems with OAuth & SAP Streamworkbut the takeaway was much more than that. It was friendship and a feeling of cameraderie. And oh, I did learn a lot about 3 tools that I would not use for serious Android developement. 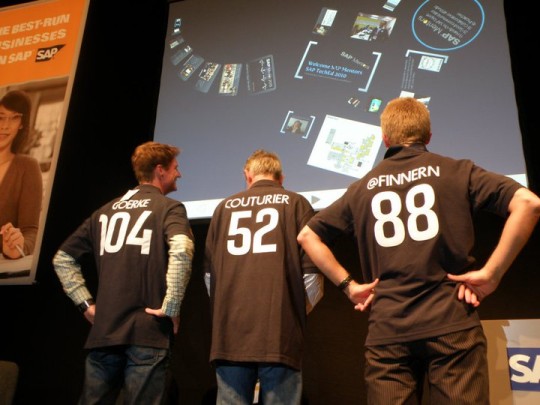 It has been a ritual with the SAP Mentors that they get to meet up with Herve Couturier for updates and this time he was joined by Bjoern Goerke giving us insights about the direction SAP was taking with technology.

The Mentors presented the T-Shirts to Bjoern & Herve who sportingly wore it right then and there giving us an awesome photo op. 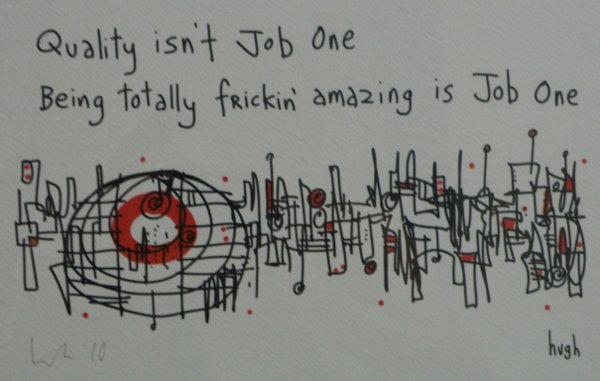 Hugh Macleod‘s cartoon on Quality has gathered quite a buzz around the SAP community. Dennis Howlett and the C5 used it quite a few times in their prezzos and also gifted one to SAP Co-CEO Bill MacDermott in Sapphire Orlando, 2010.

I had wanted one since the time I had laid my eyes on it… who wouldn’t ?

Dennis had floated the idea around having a T-Shirt made out of it for the SAP Mentors which I thought was a brilliant idea. I was plesantly surprised when when all the Mentors received two copies each of the Cartoon, one to keep and the other to give to someone who we thought lived by the motto.

It was sort of a dream come true for me as the cartoon neatly summarizes what my fellow brethren of SAP Mentors do “be totally frickin awesome”. 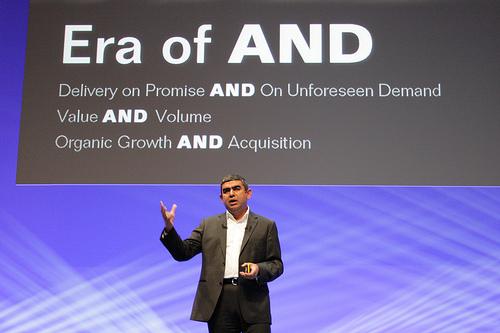 I think I can say with confidence that it was one of the best, maybe even THE best keynote I’ve heard in a long time. Vishal Sikka‘s message was crisp, clear and fun. It was the “Era of AND”. New products platform & technologies : SAP Netweaver 7.3, Project River, Project Gateway, Event Insight, HANA, Sybase mobile, it was like “Christmas came early” for us geeks and by the times the demos were done and Vishal was off the stage, I wanted more. I would sum it all up by saying that if you work on SAP Technologies The Future looks quite exciting…

Dennis Howlett, fellow Mentor had an awesome post up on ZDNet : SAP’s Sikka: “I am not a donut.” True. And he wowed the SAP TechEd crowd and I’d  add that #iamnotadonut too 🙂 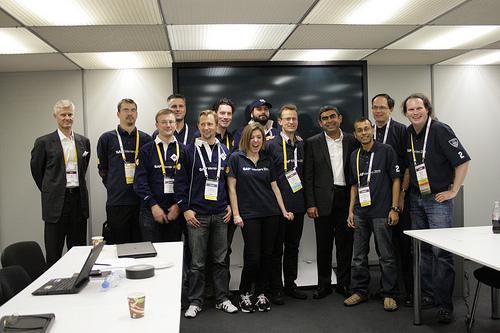 The next couple of days were spent in Mentor and Blogger Sessions, after hour parties, catching with with old friends and meeting new ones. I had an indepth overview of Gateway, River and the Sybase Unwired Platform and though it was more information that I could possibly retain in my small head,I did not want the flow of knowledge to stop.

We had sessions with Vishal Sikka about the new and upcoming products and then some more with Rainer Zinow, Sven Denecken, Jacob Klein, Ingo Breckmann, Andre Fischer, Iam Thain & Thorsten Stephan on a wide range of topics from Cloud Strategies, BPM, Gateway, River, Sybase Mobile, Business ByDesign and many many more. 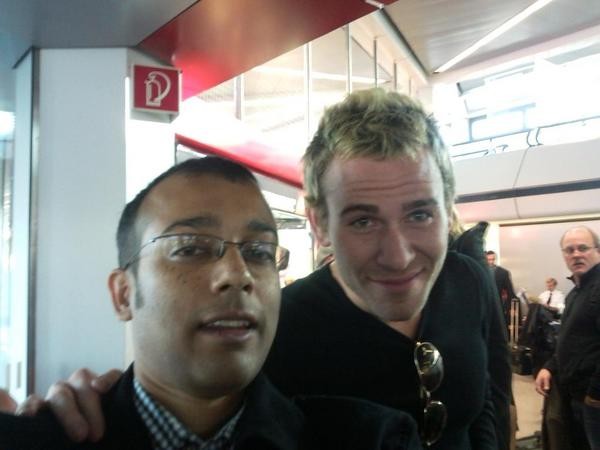 The Lifehouse concert was amazing. I was introduced to their song Hanging by a Moment in college and they’ve regularly featured on my iPod playlist. And being in the front row with a beer in your hand. Priceless…

I was also lucky to catch these guys again at the Berlin Tegel Airport and I was richer by a couple of photos and an autographed guitar plectrum. 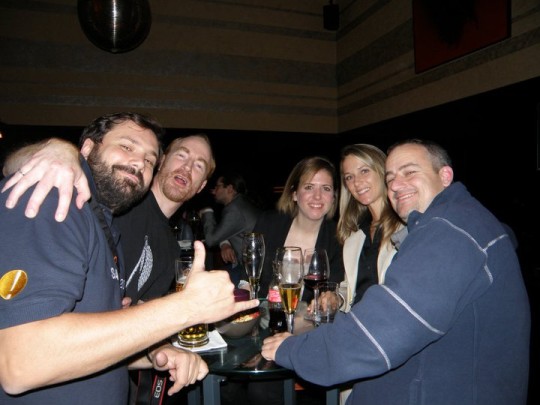 What would events be without friends ? Cluetrain with Gregor Wolf, Rui Nogueira, Andy Singleton and Mark Finnern, working together during innovation weekend with Richard Hirsch, Twan van dem Broek, Casper Ballemans and Christian Braukmüller, having fun backstage with Phil Loewen, listening to James Governor kick some butt with Michael Bechauf, going out on short cigarette breaks with Matthias Steiner, Christian Guenther and Oliver Kohl, just hanging out in the hotel bar with Tom Raftery, Anne Katherine Petteroe, Martin Gillet, exchanging notes meeting after a long time with Gali Kling Schneider and Marilyn Pratt, Jim Spath & Craig Cmehil always having my back, Chip Rodgers turning out of thing air every time we needed him or discussing my impending fatherhood and how that can be a lifechanging experience with Michael Koch.

These are but just a few moments.

Thorsten Franz, Uwe Fetzer, Luis Felipe Lanz & Dennis Howlett. I hang around with these guys all day on twitter and would have loved to meet them.

I had the opportunity to meet Dennis for the first time ever in Sapphire Orlando, 2010 having known him for a long time and he was a mine of information and a blast to hang out with. Really missed him at Berlin.

Most of the information that we had the privilege to know in one-on-one and roundtable sessions for Mentors & Bloggers were under NDA.  It was like tying up the hands of a hungry man and then spreading a buffet for him. Would have loved to blog or write more in depth about what I learnt had I not been scared of breaking one NDA or another 🙁

I work in the Manufacturing area and it is a really interesting and growing area to specialize in right now with lots of interesting things happening. Unfortunately I found nothing related to manufacturing as such in either the sessions or the demo pods which disappointed me a bit.

Abesh Bhattacharjee
Blog Post Author
October 20, 2010 at 8:58 am
That, I'll leave it to you and Craig to explain 🙂 I get distracted even when I think about it 😀

Marilyn Pratt
October 20, 2010 at 1:46 pm
Second the motion. Really good summary. But I have another take away from our time together.  I have been acting Squirrel this whole week so thanks to giving a name to my ADHD tendancies. Oops Denis Browne speaking to mentors. Vegas.

a wonderful review catching up the vibes of this great 5 days in Berlin.
>> #saptechedblues <<
>> #saptechedvibes <<
I'm happy that i made it to the more rocking video.. :o) Yeah!
Hopefully CU you all soon again

I am somewhat disappointed that I didnt get a mention as one of the folks you missed.
Just kidding. Glad you had a great time and I hope certain plans come true in the near future.

Thanks a lot for sharing your experience in Berlin, by your tweets we felt almost there, but for sure we miss the chance to share time in this escencial event.

But you know that SAP World is so small(beside the size of this wonderful community), so i'm sure we will have the chance to share nice time, maybe in another great TechED.

PS: Neil, c'mon move your body out of the island and come to visit us !!

Nigel James
October 21, 2010 at 5:56 am
It was wonderful to meet you Abesh after so long communicating in the virtual world.
Thanks for a great write up of TechEd Berlin.

really loved your blog! It's been great getting to know you - it's soo much fun to hang out with someone as funny, energized and passionate as you are. Hoping to see you again at ... maybe at DKOM?

PS: Oh, and you may be interested in my own blog - Impressions from TechEd 2010 Berlin - it's a little scarry, I just say "Great minds think alike!" 🙂