Mapping one corner of the world – Two Patterns: Consumption vs. Integration

At the TechEd in Berlin, there were a variety of new technologies that were introduced (such as River) or already introduced innovations (such as Project “Gateway) where more details were provided.  What was missing was an indication of how these new technologies fit together and how they relate to the existing architecture.  There was often confusion, because the big picture was missing.

I’ve created a quick diagram of how these new developments relate to one another.  Obviously, I’m not going to include all technologies / innovations that were presented at the TechEds. 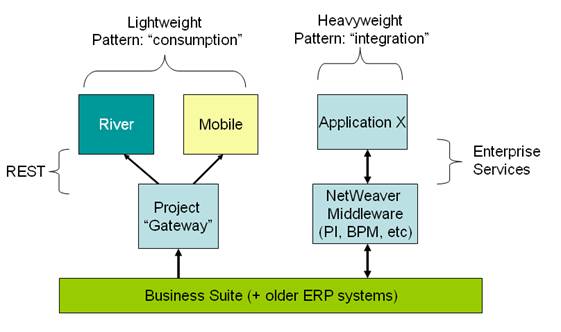 Initially, I’m not making a distinction between on-demand and on-premise offerings although the emergence of the on-demand has created the foundation for the new tools.

For me, the most important is the focus on the lightweight offerings that are REST-based and are primarily directed at the mobile market.  The basic desire is to increase usage of the fundamental business functionality in the Business Suite.   As Kaj van de Loo suggested at the Innovation Weekend “We need to open up our systems for consumption to all users. Project Gateway will help. Sybase UP will help too”. Equally important is the reassurance that the Enterprise Services aren’t going to disappear – indeed, without them, SAP would have had difficulty to move ahead with Project Gateway – but are focused on a different set of use cases.

There are indications, however, that Gateway represents a shift for SAP. The development platform choices that are the platform targets for Gateway currently don’t include Java (see picture below) but focus on web-technologies not usually associated with enterprise settings (PHP, Rails, etc.).

How does this new emphasis on lightweight applications relate to those “heavy” business processes for which SAP is so well-known? Slicing and dicing existing on-premise processes to fit this new model probably won’t be successful. The true challenge is to transform existing processes to reflect the inherent revolutionary qualities in these new devices.  Whether SAP has this knowledge or whether Sybase’s experience in mobile platforms will prove the necessary foundation for success is still open to debate.