Against All Odds – Programming of Communicating (S)ALV Grid Controls

Quite often developers struggle with the communication between ALV grid instances. As soon as a record is selected in the “main” ALV list the details for this records should be displayed in the “detail” ALV list (e.g. Customer -> SalesAreas). Whereas the first double-click event works as expected quite frequently the second event fails, e.g. threads:

Text edioter in Pop up window

Can I use Docking container in Subscreen

In the past I answered such questions several times but even I have problems to recover my own sample reports from SDN. Therefore, I document this solution a last time in this blog and I show that there is almost no difference whether the two communicating (S)ALV grids are displayed on the same screen, on 2 different main screens or even in a popup. 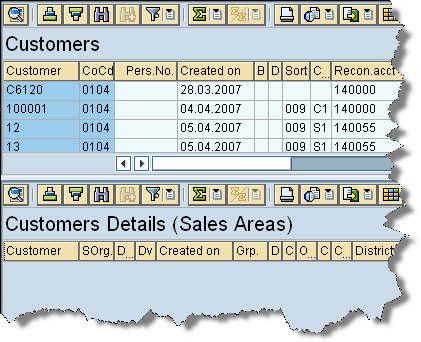 As soon as the user double-clicks on a record the details (Salesareas of the customer) are displayed in the second ALV list. For displaying the two ALV grids together on the same screen a splitter container is used. 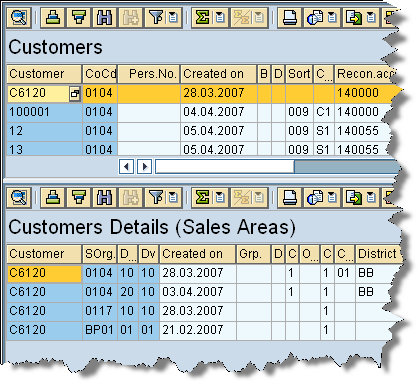 Double-clicking on a different customer row automatically refreshes the the second ALV grid. 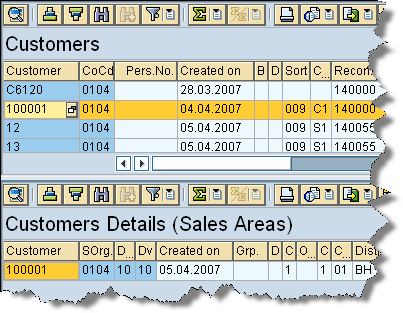 (2) Each ALV List Displayed on Different Main Screen (not shown)

In this case each grid instance is displayed using a separate docking container.

As soon as the user double-clicks on a record the details (Salesareas of the customer) are displayed in a popup. 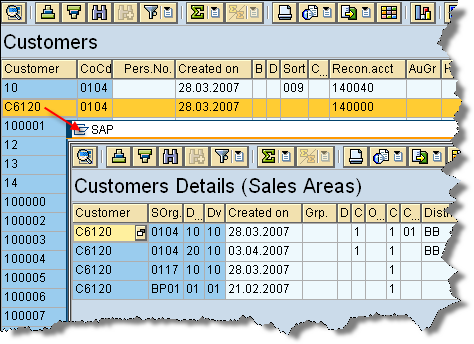 Screens – Keep It Simple and Stupid

Provided that the ALV lists are the only elements displayed on the screens we can keep them quite simple: basic flow logic and NO elements (not even a custom control because it is not required)! 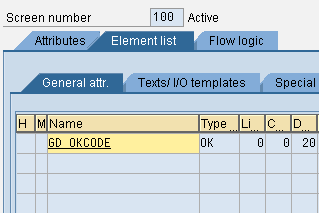 Even though virtually all sample reports (BCALV_…) of SAP show the creation and display of controls (container, grid, tree) within the flow logic of the displaying this is not mandatory. On the contrary, I prefer to do the entire control initialization BEFORE calling any screen. Below you see the START-OF-SELECTION section of my sample report. Within routine INIT_CONTROLS all container and grid instances are created. In addition, I even call method SET_TABLE_FOR_FIRST_DISPLAY within this routine.

As next step I link the main ALV list (parent container = GO_DOCKING) to the target screen ‘0100’. Eventually, the main screen is called.

What is the advantage of this approach? Well, if you want to display the ALV list on another screen of your application then just do it – by calling again the LINK method of the container.

Displaying ALV Grid in Main Screen vs. Popup – So What?

The only difference is the dynpro level:

The advantage of this approach is that you always end up with a clearly defined status. After handling the user-command at PAI the flow moves on to PBO at which flushing of the controls occurs by default.

Regarding the different modes of displaying ALV lists there is no difference whether you are using class CL_GUI_ALV_GRID or CL_SALV_TABLE because the LINK method belongs to the container controls and not to the grid controls (see Appendix: report ZUS_SDN_TWO_SALV_GRIDS).

Communicating ALV grids is a standard ABAP development task which is not complicated by different modes of displaying the ALV lists.

The approach described here can be adapted for any kind of communicating controls (e.g. tree & grid).

Andrea Olivieri
October 12, 2010 at 11:05 pm
Hi Uwe,
Thanks for the effort.
After reading this post we learned something new.
Again, great blog!

Anyway Uwe very educational blog. Thanks for enlightening me.

Thank you for this compliment.
Actually, we there are three of us:
Naimesh, Marcin (Pciak), and me.

It's nice you have refreshed this topic. It seems lots of people are confused about ALV programming if only several controls are included. This will be a nice one to give as a reference to everyone who struggle with multiple ALV-related issues. Thanks for that.

BTW: It seems I have been given a label I am not aware of 😉 Will not complain too much about it, however Guru is the level I can just dream of. Anyway it's a pleasure to see my name next to yours Guys:)

Sure a few people would get confused with the K.I.S.S principle Uwe has mentioned in this blog.

Vinod Kumar
October 13, 2010 at 9:51 pm
Great Blog. I Was searching for something like this. Thanks for sharing the information.  One Question Uwe, Can we create similiar reports using SALV classes ?

Let me answer this. I'm sure you might be aware of this: SALV & BCALV techniques cater similar functionalities, but the implementation techniques are different.

Only exception(and this is a major difference) is that in SALV doesn't allow the "Editable Grid" functionality.

I have added a second sample report using class CL_SALV_TABLE. As you can see from the coding there is virtually no difference between these two ALV grid models with respect to the displaying modes.

Madhu Vadlamani
January 10, 2011 at 1:53 am
Hi,
Perfect example.Thanks for giving a good blog with an example.
Regards,
Madhu.

Valerie Lee
January 18, 2011 at 6:51 am
Great blog.  Can this apply to cl_salv_tree?
I have a requirement to 1) create customer hierarchy tree report. 2) If user select the tree nodes and click button to block or unblock customer sales area. It should first pop up screen to ask some info, take that info to update some Z tables behind the scene and then block or unblock all low level customers in the selected node(s) (this is multi selection) and then show updated data on screen.
I was able to finish the first part and struggle in the second part.  There is sample salv_demo_data_update but it does not have the popup screen to get some info.
Thanks.

It is always motivating to see that my sample coding can be applied to real world problems.

Former Member
August 24, 2011 at 5:29 am
I tried to implement this approach, but when I refresh the first ALV data and call the screen 100, the first screen stays the same despite my attempt to flush or use the refresh method. Any suggestion?

When you want to refresh an ALV list always ensure that you pass PAI followed by PBO. Probably it is a good idea to place the method call go_grid->REFRESH_TABLE_DISPLAY( ) at PBO.