The Spork In Germany (Evening, Innovators)

It’s close to the end of the second day (30 hours) of the inaugural SAP Innovation weekend.  By the time you read this the teams will have presented and a “winning” project selected from among 7 business cases.  As mentioned in yesterday’s posts, teams were selected based on people’s interest in the business cases, and in their inclination to work together.  Some of us had decided ahead of time what we would work on, while others (like me) didn’t make up our minds until we were here.

In the lead up to this weekend, we could put our names and information on the SDN wiki; I chose to list my role as “gadfly.”  As this word is not in common use, I showed Abesh the online definition page I found to help anyone who wondered. In one sense it is a pejorative term; in another way it is a succinct description of a necessary social role – the person who shines the light into dark places.  With the small team I worked with, I wasn’t quite a floater and commentator.  But I think I observed group dynamics and the short evolution cycle to have valid perspectives.

Almost no one wanted “Team 3”, or “Team 5”.  The choices seemed to be more about the technology than the chance to network and learn from an unknown challenge.  I stood in the “5” zone alone for a couple minutes until a few people wandered over.  With a slight shake-up as we tried to get the momentum going, we were down to three hardy souls, including yours truly.  We knew going in we weren’t likely to win prizes (other than sympathy), but it didn’t matter to me, or to Greg, or to Rajeev.  We were given attention from SAP experts, and as there were fewer of us than the rest of the teams, we had more hands-on time, more focused help, and more new experiences than the others, I’m sure. So it was worth the stubbornness we showed.

One side note yesterday was on the displays of both iPhone and Android applications for conference agenda management.  On the one hand, having easier ways to manage an intense yet short term event like TechEd or ASUG Annual Conference is to be expected.  But on the other hand, knowing already what kinds of planning is involved in building the schedules, accommodating the conflicts and last minute crises, not to mention catering to the whims of those who feel privileged to push their own agendas over top every other plan, I am not enthused about a software application trying to solve all these issues.  And I’m not just talking about the fact that many people don’t have an iPhone, or an Android (I should know, I am one of them).  I’m talking about the problems with data synchronization (TechEd officially starts tomorrow, I’ve had my agenda built for a couple weeks, and I continue to get new invites by any number of means up to very late today).  I guess I don’t have an answer, just a rant.

Benchmarks are KPIs not APIs

We knew that “Financial Management” was boring, and that the kind of heavy techies that flock to events like this would avoid it like the plague, being pulled into anything with “Social Media” in the title.  Sure enough, that was the biggest team, more than twice our size.  Yet when Dick Hirsch was asked if the team was too big, he said no.  Maybe it wasn’t, but I got the sense that there were more onlookers on the big teams than on ours (I was the only slacker).

I’ll be interested to see how the turnover of these projects happen in Las Vegas.  One rule I heard clarified was that those teams will start fresh.  If you’re reading this, heading to TechEd Innovation Weekend number 2, think about doing a project with finance or other hard-nosed requirements.  Creating another twitter or facebook with SAP tools is surely fun, but near the last thing that a volunteer organization needs these days.

What did I think of Innovation Weekend, what did I get out of it, would I do it again, would I recommend it to my friends, what would I suggest to make it better, would I want it to marry my sister?  I’ll go into three themes for me.

This is a two-way street, very much different than the traditional TechEd concept where instructors teach you, then allow you to work on canned problems.  That’s great if you can learn from that, but this style is more like giving someone a box of colors and a blank piece of paper than selling them a paint-by-numbers landscape.

Lots of the crowd was there to play with new toys.  I wasn’t.  My job won’t be seeing any “new” stuff like, oh, name 5 products SAP has announced in the last 6 months.  And what’s the point of paying to do that?  (or in my case, getting in free but giving up two days of sight-seeing in Europe?).  The upside for SAP, as Dennis Howlett has pointed out, is a lot of free advice, which could also be gained in beta programs or ramp-ups, but not in so quick and intense a way.

I didn’t use Streamwork, or Code Exchange, or BI on-demand.  My team used the latter.  I stayed strictly hands-off, drawing requirements on whiteboards (OK, paper charts), and documenting what we were on about in the SDN wiki.

(2) Build something for the community

I’d heard that the primary goal of these projects was to develop process and programs that specific non-profits could use.  Our team spent a lot of time trying to map what we were doing with reality.  It was hard in such a boiler-room environment.  I mean, really hard.  I doubt any of the other teams looked at their projects with such a perspective.  Maybe they did, but about all I heard from the other team presentations was a mocked-up donation model, and a bit about marketing.  It’s normal for people to put their head down in the technical issues.  Pulling up and looking around needs discipline, or a reminder from the community.  I don’t think that happened.

Community Day was formerly the time and place to meet global colleagues, either known or not yet known.  Activities such as “speed networking” can generate a lot of good connections for the future, with little effort or time commitment.  We didn’t get that here.  With under 100 of us, I met a few people that I knew online but not in person, a very few that I did not know before, but I don’t think my networking circle grew much, given an entire 2 days was spent on this (other than a couple hours with the SAP Mentors later).

Video of our team project

Now obligatory spork image, with a sandwich, a quiche, and  a Sierra cup. 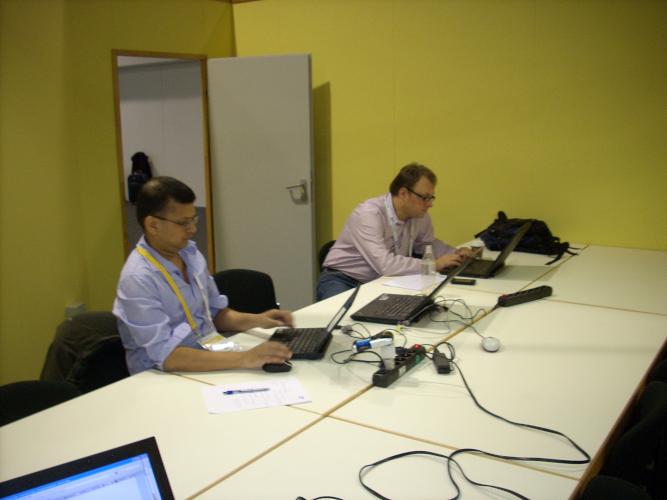 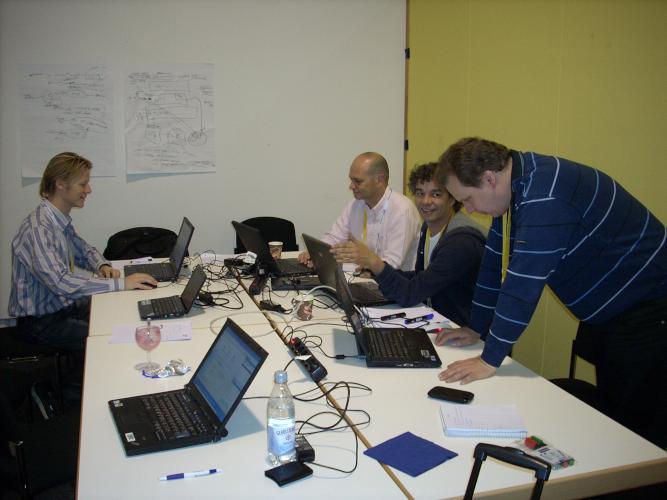 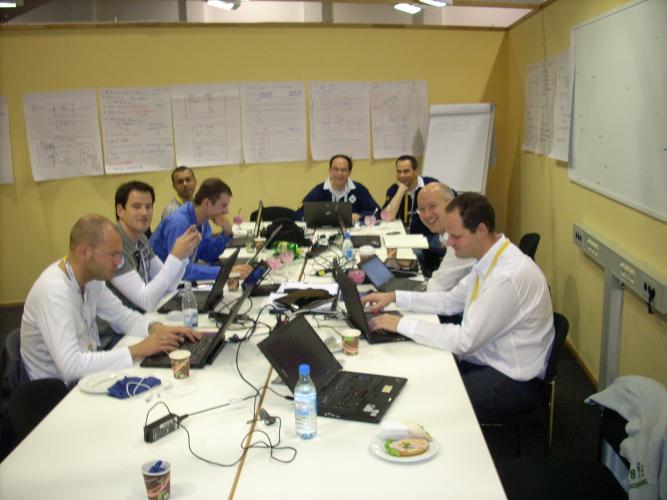 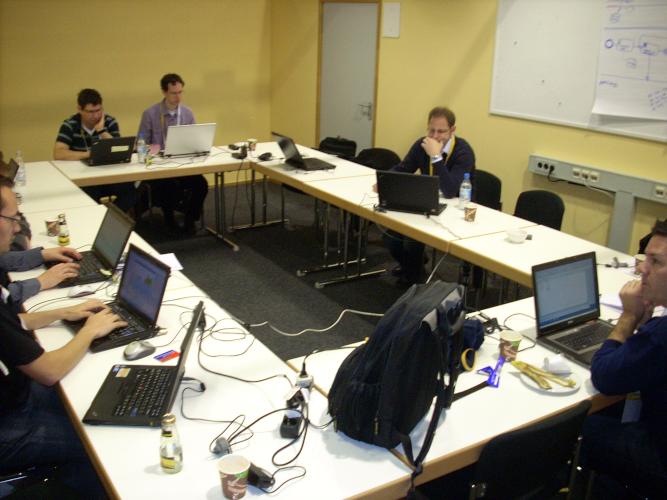 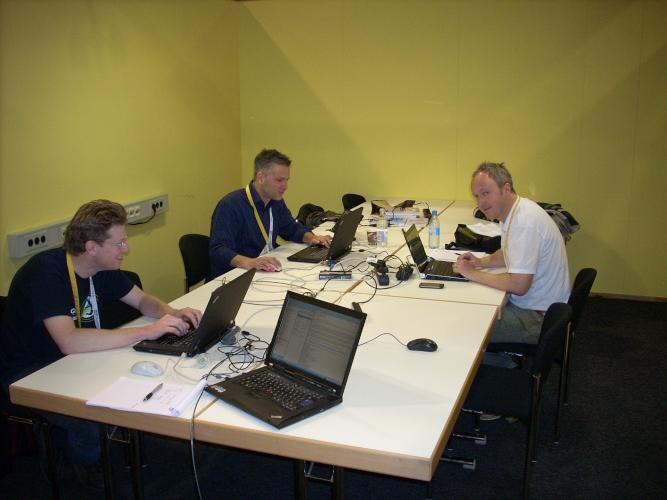 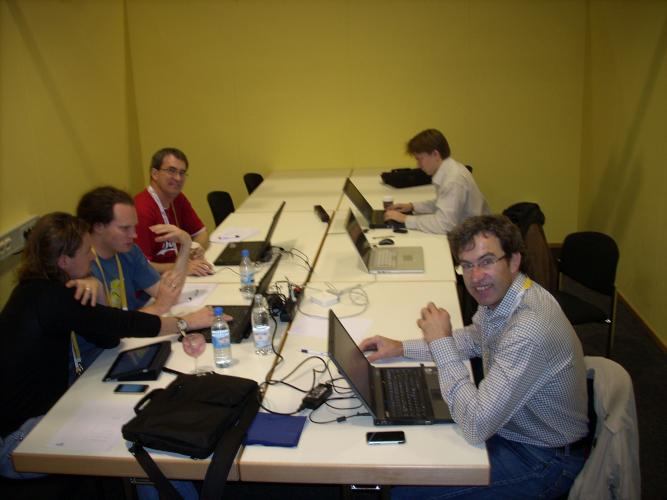 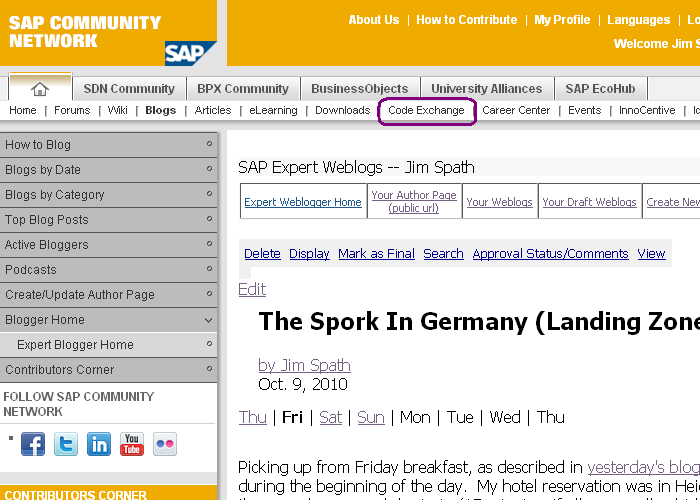 I'm looking forward to it.

Jim Spath
Blog Post Author
October 12, 2010 at 5:58 am
Let me know how the food compares - take pictures please.  If you have a spork, it would be great to see one in Las Vegas.
Thanks for the feedback!
Jim

Former Member
October 12, 2010 at 5:47 am
thanks very much for your thoughts. It helps me prepare for attending Innovation Weekend in Vegas. 🙂