The Open Group Architecture Framework is a widely used standard for Enterprise Architecture practices.  It is important to refer to it, when developing a practice for architecture roadmaps.  Roadmaps are very important and referred through many of the TOGAF process called the Architecture Development Method (“ADM”), yet there is very little describing how we should build the roadmaps and standards how to structure the roadmaps.

In any endeavor, it is useful to start with first principles, before drilling into the detail.  The following is the essence of TOGAF, to define the Business, Application, Information, and Technology architecture layers, along with the drivers of the Business Model and the ultimate output of the projects to affect change. 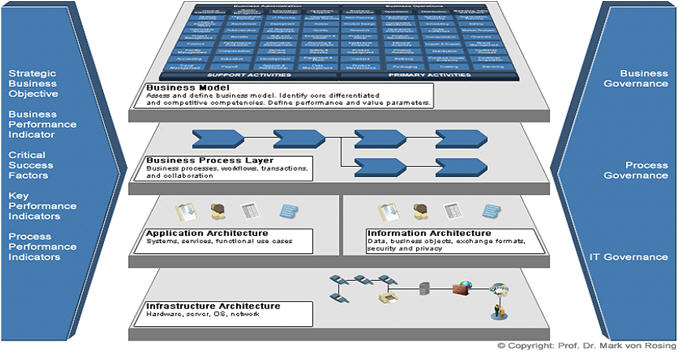 TOGAF describes the following requirements for a Consolidated Architecture Roadmap1.

For more information on TOGAF and the TOGAF Architecture Development Method (ADM), refer to http://www.opengroup.org/architecture/togaf9-doc/arch/ . This blog is based on the ASUG Enterprise Architecture Roadmap Days.  Be sure to attend one of the events coming to a city near you.  The next even is in Atlanta on November 4th.

Also, there is a Roadmap Preconference Session at TechEd 2010 in Las Vegas.  You will meet with more of the though leaders who have developed the SAP product roadmaps and meet with your colleagues who are developing best in class company architecture roadmaps.