Imagine completing an average six month SAP project or a big release cycle which includes several development activities with more than 50% reduction in transports (than the normal project or release cycle) moving to production yet executing everything same as in a normal SAP project. Seems weird! but is possible.

Let us start the discussion with one of the most basic things that an SAP consultant uses while working in SAP system- Transports.

As per standard SAP, a change (transport) request must have a unique owner. This means an object container with its owners name for completion of a logically complete activity. This in turn may require several employees (members) to work on accomplishing the complete change. For this reason SAP provides second level called task. Once a member completes his/ her activities, is needed to release the assigned task. This indicates completion of his/her part of the work. As a member releases his/her task, objects move to the higher level and get consolidated in the change (transport) request. Releases of all the tasks indicate the transport owner, completion of the change. He can then finally release the main change request to move to quality system and subsequently to production. If in this way transports are used, we are manually able to minimize the possible number of unnecessary TRs in the system. However with this approach we are just able to reduce the unnecessary transports only during initial development activities.

Nowadays with volatile market situations, high business expectations and budget constraints companies are trying to reduce project/ release timelines. This results in poor requirement gathering and blueprinting activity due to lack of time, thus resulting into actual requirement visibility at the time of testing when users see the actual output in the system. Even sometimes poor development may cause rework on the activity already performed. In such cases you may expect a lot of changes to the existing functionalities and thus creation of multiple change (transport) requests for the same object. Multiple movements of changes between Dev and QA environments cause the similar buffer entry for production import queue. Remember the fact that more the number of transports, more dependencies to check and thus higher risk in import of transports to production as  you cannot remove unwanted TRs due to sequencing problems. This one of the main reasons that minimization of transports is needed in the system.

Transport of copies option is available in each SAP system. This is a type of transport similar to customizing and workbench with its different behavior. Beauty with this type of transports is, it dies in the next target system. What does this mean??? Let’s say I have three system landscape for my ECC system: DA1 -> QA1 -> PA1.

Such a small difference! How will it help?

With introduction of SAP Solution Manager Change Request Management  (1) SAP avails a task list (figure 2) containing several options for transport management activities start from transport creation till import to production and retrofit to other systems (Details on ChaRM basic setup can be found in  (2)). 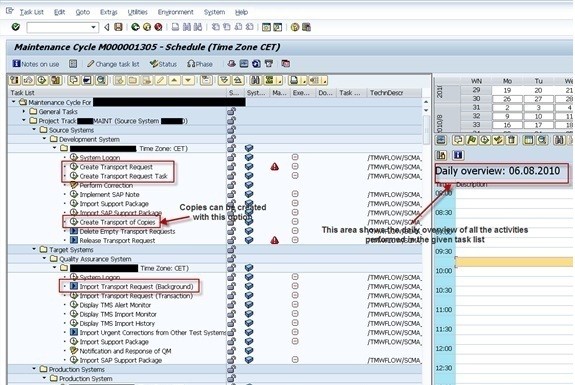 One of the available options in the task list for any development system is Create Transport of Copies. So, suppose you get a requirement of creating a particular form for invoice output (figure 3).

This schedules the job at background to create Transport of Copies for the selected TR. At the end of execution you can see in DA1 system a transport of copies: DA1K9005 with description DA1K9004: Generated test transport. Note that the scheduled job does following:

In this way at a time one or multiple ToCs can be created for the given system. Advantage in this process is that the main TR is still active and not released.

4. You can then select the option under QA system in the same task list to schedule the import to QA system job to import the changes in QA1 system. 0.1. 5. If there is any change identified or a dump occurs due to movement of transport to QA1, you can perform the change in the same transport DA1K910004 and release the new task under same original transport DA1K900004.

0.2. 6. Same procedure can be repeated to move the corrections to QA1. This way the changes can be finalized under the same original transport.

0.3. 7. Once the development is completed and changes are accepted by business, the actual transport can be released and imported to QA1.

0.4. 8. This time the finalized transport will now be available in production import queue which can then be imported along with other change requests.

To clarify - the statement made under (3) here that transport must be released in DEV to be added to a TOC transport is actually not true - unreleased transports can also be added to a TOC one. There will be a warning message that objects can't be locked, but it can be dismissed. Perhaps author could update this blog. Even though it's old it still comes out on top in Google search. Please see this discussion for more information on the subject: Diff. between "transport of copies" and workbench transport?

Can someone let me know how to find the parent TR of a Transport of copies?

If you need to ask a question please open a discussion.

There is, however, no "parent-child" relationship per se in TOCs. If a TOC was created with reference to another TR then you'll see the related number in the comment:

But a TOC can be created without referencing any other TR too, so in this case there is no "parent" at all.

@rajiv.jha Hi, thanks for your explaination about Transport of copies. you said there is no import TR in PA1 if its type is transport of copies. that's correct. my question is if i wanto import it in PA1 manually, how can i achieve this?

This is a very old Blog, not sure if anyone is following the same, but it is believed with Solman 7.2 SP 07 and Focused Build 02 there is a different meaning how to create Transport of Copies through the Work Item. Still there is a need to release specific tasks through Managed Systems, but the release of the Work item in Focused Build will actually soft release the Transport content to the QAS systems, while once tested and the released build, this ToC will be created and hence moved to your Production System.

Anyone had better than me touch with the same topic, please let me know